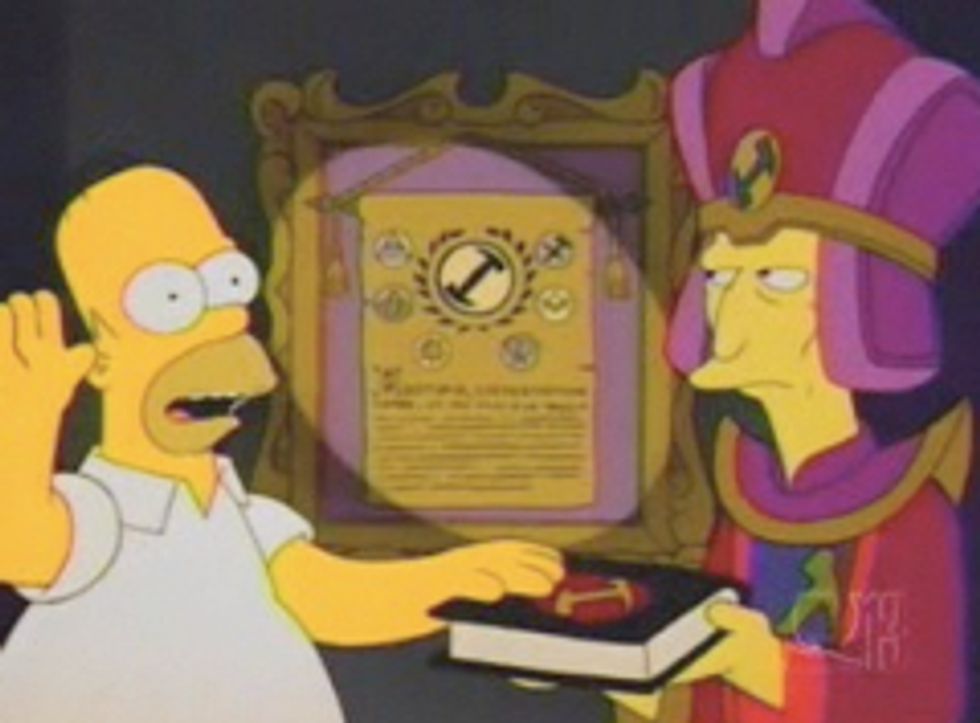 Rod Blagojevich couldn't make it himself to today's Senate swearing-in ceremony -- why would he, right? He's not even a Senator!! -- but his Taint, hisgrimy grimy taint, was omnipresent in the chamber, and it reeked. After thoroughgoing racist Harry "Bull Connor" Reid made a black person leave Capitol Hill due to the color of his skin this morning, the black spectre of Non-Racial Transcendence swept the chamber with Misery, casting a blood red aura of Sin throughout the ancient lair of our bicameral legislature's more exclusive wing. The Racists went on with their ceremony, which required a blood oath to Dick Cheney. Senator Joe Biden took the oath. Crippled lion Ted Kennedy took the oath. John McCain had a sad.

Four by four, new senators and those re-elected to another term walked up to be sworn in just moments ago. Senator Joseph Biden Jr., the vice-president elect, beamed as he stepped forward to be officially sworn in, and carried a large Bible. He will soon be resigning his Delaware seat to assume the vice-presidency, and Ted Kaufmann, a longtime aide to Senator Biden, has already been named to replace him.

Perhaps the most poignant moment occurred when Senator Edward M. Kennedy, who has been battling brain cancer, hobbled a bit with the help of a cane, as he escorted Senator Dick Durbin for the ceremonial swearing in. One colleague after another reached out to hug or shake hands with Mr. Kennedy, who is serving his seventh term in the Senate.

So maybe Biden really WILL drop out before all's said and done -- that's why he WILL NEVER QUIT THE SENATE EVER -- and Hillary actually WILL become vice president instead? The prophecy survives, today.

Also, "The Mac is Back," in the Senate, where he will go back to the old task of taking strong stands on various symbolic issues related to Honor because he's not smart enough to actually understand policy. And as he bragged about constantly on the campaign trail, he has absolutely no friends in the Senate:

In addition, for a short while there, Senator John McCain, the Republican presidential nominee sat alone, hands folded in his lap but smiling as he watched the ceremony.

...But where was Roland Burris?