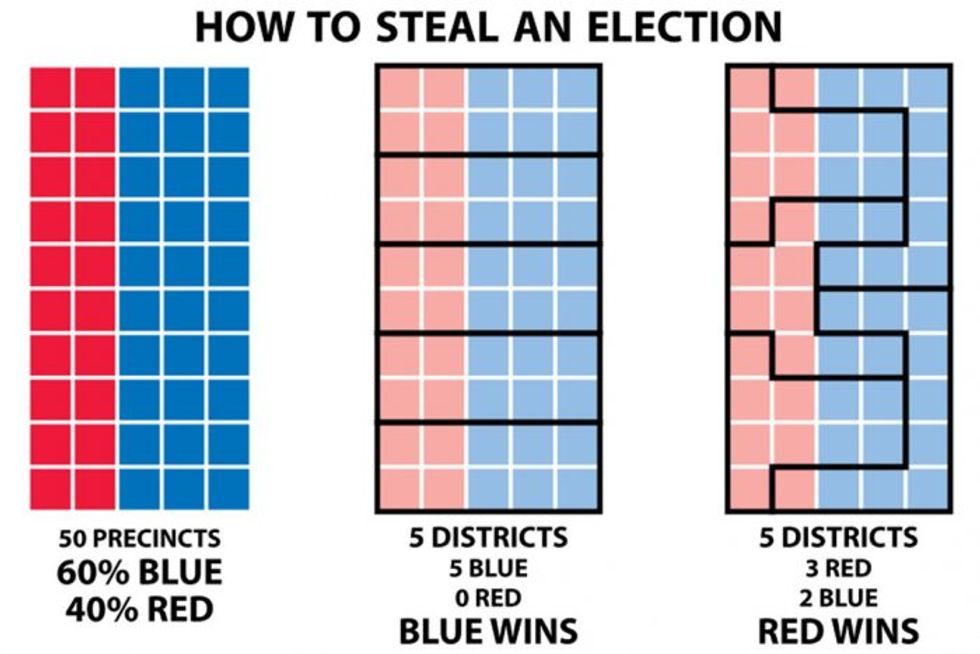 THIS IS THE MOST IMPORTANT THING THAT HAS HAPPENED THIS YEAR.

Yeah, okay, a federal district court decision out of North Carolina isn't sexy like the Fusion GPS Dossier. It's not delicious like Bannon getting his comeuppance. But long after Emperor Dementia is pushing up daisies, when Melania has packed on 30 pounds and shacked up with the security guard, after Barron has changed his name and moved to an ashram, we will still be stuck with Congress. AND GOD HELP US IF WE DON'T FIX IT BEFORE IT'S TOO LATE.

Right now, the House of Representatives and virtually every state legislature is gerrymandered to shit. The GOP has spent a generation redrawing state and Congressional districts to ensure permanent Republican control, no matter how many votes Democrats get. That's why Republicans have a nine percent advantage in House seats, with a measly one percent margin in the popular vote.

That's how a blue wave in Virginia produced a GOP-led legislature (51-49) when the GOP only won 44 percent of the vote. The game is hopelessly rigged!

In 2016, a federal court in Wisconsin finally said ENOUGH OF THIS FUCKERY, ruling that partisan gerrymandering violates the Equal Protection Clause. The Supreme Court heard arguments this fall on the Wisconsin decision, and agreed to hear a case out of Maryland, which is gerrymandered to favor Democrats. Perhaps a positive omen?

And yesterday in North Carolina a second federal court tossed out Congressional districts for being illegally partisan. This is how the law changes -- multiple courts in different Circuits agreeing that the old laws violate the Constitution.

Mapfucking in the Tarheel State

Republicans in North Carolina made no bones about what they were doing. State Rep. David Lewis admitted it outright: "I think electing Republicans is better than electing Democrats. So I drew this map to help foster what I think is better for the country." Lewis and his colleagues hired the chief GOP mapfucker, Tom Hofeller, and told him to maximize the number of safe Republican Congressional Districts. Using past vote tallies, Hofeller cracked Asheville and Greensboro, packed Durham, Mecklenburg, and Wake Counties, and produced 10 reliably Republican districts out of 13 in a state that is basically 50% red and 50% blue.

Despite their success at using predictive computer modeling to ratfuck the vote, the NC GOP's main defense is that MATH IS HARD. How can you prove that they did it on purpose, huh? Maybe they wished it, and then it just happened by magic!

The Court is not here for that bullshit.

But -- as evidenced by their consistent placement of “social science” in quotation marks and their characterization of Plaintiffs’ evidence as “academically inspired” -- Legislative Defendants’ judicial manageability argument appears to rest on a more cynical objection: that we should dismiss Plaintiffs’ actions as nonjusticiable simply because much of the evidence upon which Plaintiffs’ rely has its genesis in academic research and is the product of an effort by scholars to apply novel, and sometimes complex, methodological approaches to address a previously intractable problem. To the extent Legislative Defendants are in fact making such an argument, it fails as a matter of both fact and law.

The court spent literally 80 pages -- we skimmed it! -- showing all the ways you could measure the map to prove the GOP cheated. Even if they hadn't been dumb enough to admit it out loud. FFS, in 2016 the GOP took 53% of the vote and 77% of Congressional seats. They forced Democrats to "waste" their votes in supermajority districts, driving the efficiency gap above 19% in 2016.

In short, NC legislators deliberately made Democratic votes worth less than Republican ones. Which is news to no one, but it's a threshold issue before the Court can decide if this dilution is legal. [Editrix's note: We asked your Five Dollar Feminist if SCOTUS could look at the Electoral College on that basis, and she said no, because the Electoral College is "in the Constitution." Even though slavery was too.]

It seems fairly obvious that cracking and packing Democrats devalues their votes and thus violates the Equal Protection Clause. If my vote is worth less than yours, then we are not equal in the eyes of the law. But before the Wisconsin districts were invalidated, courts had largely taken the position that it was impossible to measure partisan gerrymandering because MATH IS HARD. Having worked so hard to establish an objectively measurable standard, however, the judges in North Carolina were then free to toss the districts for being unconstitutional.

Relatedly, by seeking to dilute the electoral speech of supporters of disfavored parties or candidates, partisan gerrymandering runs afoul of the First Amendment’s prohibition on laws that disfavor a particular group or class of speakers. Citizens United, 558 U.S. at 340 (explaining that “[s]peech restrictions based on the identity of the speaker are all too often simply a means to control content”).

Since the mapfuckers used past voting data, i.e. political speech, to dilute the voices of Democratic voters, the maps violate the First Amendment. Womp womp.

The same NC federal court has been trying for the better part of a decade to get the NC legislature to fix its maps. Every time the court orders the GOP to produce legal, non-discriminatory districts, the legislature dicks around for a year and comes back with the same old illegal shit. Then they litigate for another year, at which point they throw up their hands and say, "Ooops, we're out of time. Guess we'll have to use the old maps for the next election." But not today, Satan! The court ordered the NC lege to come up with a new map by January 29. And just in case they don't (or they don't do it in good faith), the Court is gonna get started drawing it up themselves.

To that end, we intend to appoint in short order a Special Master pursuant to Federal Rule of Civil Procedure 53 to assist the Court in drawing an alternative remedial plan.

It's a pretty safe bet the GOP will immediately appeal this ruling. We would not be FOR SHOCKED to see the Supreme Court take it directly, since it touches on the same issues as the Wisconsin and Maryland cases. So who knows what will happen. BUT THIS IS A BIG DEAL. We could impeach Trump tomorrow, and we'd still be fucked if courts allow the GOP to cheat their way into power. Redistricting is the only way back to a stable, bipartisan democracy.