Big Oil Gives Up On Drilling In Arctic, Loses Billions. Sucks To Be You, Big Oil! 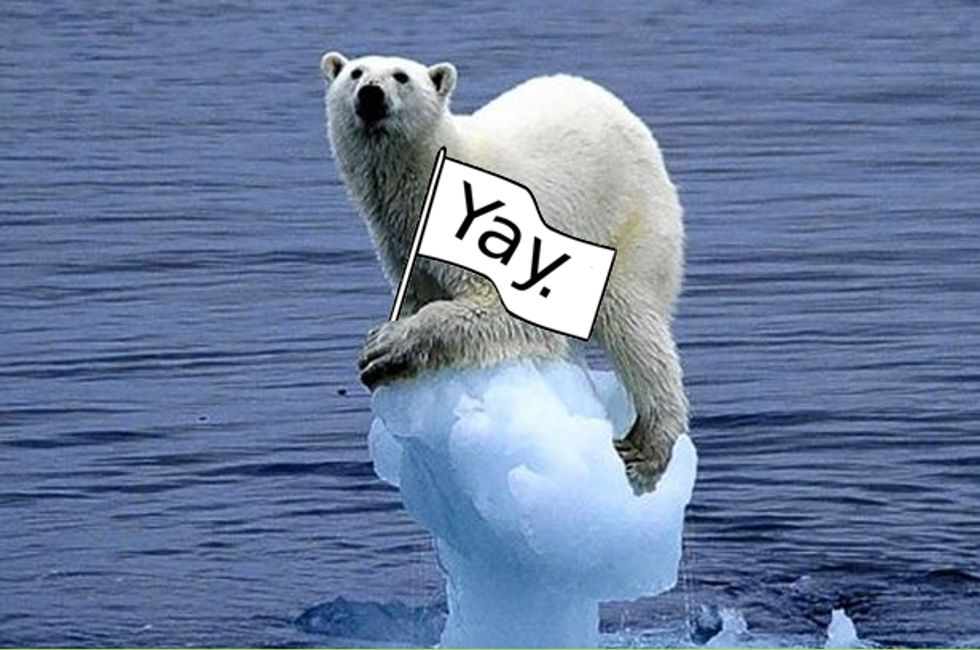 Now, about my disappearing ecosystem...

This post sponsored by a grant from the Patty Dumpling Endowed Chair for coverage of oil spills, oil company dickishness, and occasional schadenfruede at the folly of Big Oil

Hey, Kids, how about some actual NICE TIME news on the environment and global warming? While it's not quite as nice as, say, the Democrats taking back Congress and putting some people on the House and Senate Science committees who think science is actually a thing, it's still a temporary reprieve for one endangered chunk of the planet. Several huge oil companies, including Royal Dutch Shell, ConocoPhillips, and others, have abandoned their plans to drill in the Arctic Ocean, and are simply walking away from drilling claims for which they paid over $2.5 billion. Not out of the goodness of their hearts, though, or because the hippies in kayaks stopped them, but on account of cold (very cold) economic reality:

The pullout comes as crude oil prices have plummeted to less than half their June 2014 levels, forcing oil companies to cut spending. For Shell and ConocoPhillips, the decision to abandon Arctic acreage was formalized just before a May 1 due date to pay the U.S. government millions of dollars in rent to keep holdings in the Chukchi Sea north of Alaska [...]

Shell last year ended a nearly $8 billion, mishap-marred quest for Arctic crude after disappointing results from a test well in the Chukchi Sea. Shell decided the risk is not worth it for now, and other companies have likely come to the same conclusion, said Peter Kiernan, the lead energy analyst at The Economist Intelligence Unit.

"Arctic exploration has been put back several years, given the low oil price environment, the significant cost involved in exploration and the environmental risks that it entails," he said.

The oil companies are giving up roughly 80 percent of the area in the Chukchi Sea they'd purchased drilling rights for in 2008. The rights alone cost over $2.6 billion, and Shell, the only company that actually tried drilling up there, lost billions more when exploration attempts came up dry. Previous Shell attempts to drill in the Arctic in 2012 failed spectacularly when one of its rigs broke loose and ran ashore, thanks to "inadequate assessment and management of risks."

Shell did decide to hold on to one parcel of seabed: the same tract where it didn't find diddly last year. Company spokesman Curtis Smith explained in an email to Bloomberg News that the company isn't going to try drilling it, but that it wants to keep control of data on its failed exploration effort, which is apparently worth something to the company:

Companies generally have to give the U.S. government the geological information they glean from oil and gas development in federal waters, but they can get an extra two to 10 years to turn over that data as long as they still hold the territory.

Yr Wonkette is not an oil engineer, but our cynical reflexes tell us that maybe Shell doesn't want to give the big bad government any information that might suggest other leases would come to nothing. Or maybe it merely likes having data to play with and doesn't want to share.

Rachel Maddow, who has an open crush on the "kayactivists" who tried to block Shell rigs from leaving port last year, was fairly giddy Tuesday about the news:

[wonkbar]<a href="http://wonkette.com/577719/sen-inhofe-if-global-warming-is-real-where-did-i-get-this-snowball"></a>[/wonkbar]This doesn't mean the Arctic is now safe from drilling forever. Shell and other companies still hold other Arctic claims in the Beaufort Sea, and it's possible the Interior Department could auction the forfeited leases at some point when the price of oil increases enough to make Arctic exploration profitable again. And of course there's always Russia, Norway, Canada, and other countries which may want to give Arctic drilling a go. At best, this is probably a temporary pause in attempts to drill more oil up yonder. But it's still something, a break during which maybe we'll find the backbone -- or better, the profit motive -- to make cleaner energy sources a priority.

Now, if only a polar bear would eat James Inhofe ... Oh shoot, we shouldn't say that. Bad Wonkette, bad!