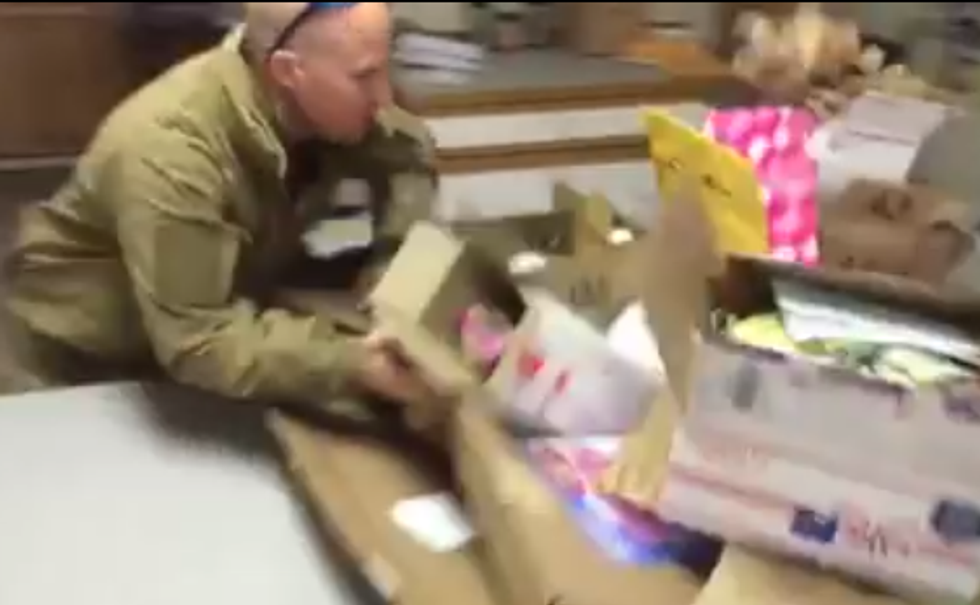 One of the biggest disappointments for the Bundy Militia Freedom Insurgents was, of course, their complete failure to rally the people of Oregon, or even of Harney County, to flock to the Malheur National Wildlife Refuge to join their cause. While they had a few local supporters, most folks in Burns, Oregon, wanted them to get the hell out of the neighborhood. As you'll recall, even the two local ranchers who the occupation was allegedly in support of wanted nothing to do with the Bunditarians -- Dwight Hammond and his son Steven weren't happy with being convicted of arson on federal land, but on their way to prison, their attorney took the time to write to Harney County Sheriff David Ward that "Neither Ammon Bundy nor anyone within his group/organization speak for the Hammond Family.” Now that the Bunditos are all in jail, Sheriff Ward has spoken at length about the weeks leading up to the Malheur siege, and wouldn't you know it, it turns out the militia dickweasels had already done a fine job of alienating local people even before they took over the wildlife refuge on January 2.

Ward spoke to a group of law enforcement officials in Spokane, Washington, at the invitation of the FBI, about the months leading up to the protest and armed occupation, and also sat down for a podcast interview with Spokane County Sheriff Ozzie Knezovich about the lunacy. (Is the audio embeddable? No it is not.) Ward told Knezovich he'd only been Sheriff for 10 months when he was first contacted by supporters of the Hammonds, including Ammon Bundy and seemingly omnipresent Nevada Assemblywoman Michelle Fiore, in November of 2015. Since the Hammonds' prosecution had been a federal matter, Ward says, he didn't even know who these very passionate strangers were calling him about; he apparently was not aware (as he surely has been informed far more times than he'd prefer) that the anti-government loonies considered him a natural ally, since all good patriots know county sheriffs are the highest legitimate legal authority in America. Sadly for the Bundys and Fiore, Ward chose to remain a member of the reality-based community.

Eventually, Ward says, he met at his office for two hours in November with Ammon Bundy and "patriot" crackpot Ryan Payne (the dude who insists the Civil War never happened). Bundy seemed personable enough, but Payne creeped him out. When Ward told them they were free to protest, but that he absolutely would not tolerate an armed standoff, let alone violence or bloodshed, Payne told him there'd be no violence as long as Ward agreed to "tell the federal court system it had no authority over citizens of Harney County." Ward added that Bundy and Payne tried to dictate to him what his job was as sheriff: to kick out that they called "unconstitutional agencies" from Harney County.

If I didn't do my job according to what they thought it was, that they would bring thousands of people to town and do that job for me.

In a meeting on Nov. 19, Bundy returned with a group of 10 armed supporters and posted guards outside the Sheriff's office, which became a common part of public meetings in Harney County -- the Bundys would leave 20 or so armed men outside meetings, to make sure Ward's four deputies didn't get out of line. Just like the Founders wanted, you know. In that later meeting, Ward made it clear that part of his job, under Oregon law, was to enforce arrest warrants, and so he informed Bundy that, no, he wasn't going to let the Hammonds walk free. Presumably Sheriff Ward wasn't even impressed by the pocket Constitutions the Bundys liked to wave around.

After the Bundy crowd determined that Ward wasn't going to play sovereign citizen ball, they used social media to start a campaign of harassment, flooding the Harney County dispatch center with so many calls that dispatchers were unable to take 911 calls. Bet that showed the tyrants!

After that, things got weird. Or weirder.

Soon strangers began arriving in town. Their numbers became noticeable after Thanksgiving. They followed the sheriff, his deputies and their family members, Ward said. They drove slowly by deputies’ homes. People who put up signs or Facebook pages against the Bundys were harassed and at least one person fled town in fear for his safety, Ward said.

Blaine Cooper and Jon Ritzheimer, who would become central figures in the standoff, followed Ward and his family as they went Christmas shopping, Ward said. Others followed them in the grocery store, and Payne once complained to Ward that Ward’s mother had threatened him, Ward said.

Ward, a former Army medic, was especially critical of some of the occupiers who falsely claimed to be military veterans:

“It was a very trying time,” Ward said. “I looked over my shoulder during that time more than I did in Afghanistan and Somalia.”

Spokane Sheriff Knezovich agreed, and even dared to suggest that a bunch of armed trespassers taking over a federal facility might not actually be such great patriots:

Their intimidation of deputies and their families crossed the line, Knezovich said.

“True patriots don’t do that to other Americans,” he said.

Ward closed the interview by saying that he's all for the Second Amendment, but expressed the potentially heretical view that there are other parts of the Constitution as well:

“I believe in the Constitution in its entirety, not just the parts that make me feel good,” he said.

Clearly an enemy of the people. We can hardly wait to see how the Derposphere replies to Ward, at least the parts that haven't been jailed. We also recommend you give a listen to the full interview -- Sheriff Dave Ward sounds like an extraordinarily sane man who put up with more shit from sanctimonious crazies than any law enforcement officer should ever have to deal with, and managed to do it with grace. He says Harney County is starting to get back to normal, although some locals still get nervous when they see cars with out-of-state plates. If you do go for a visit, maybe put a very visible Audubon Society sticker in your rear window.