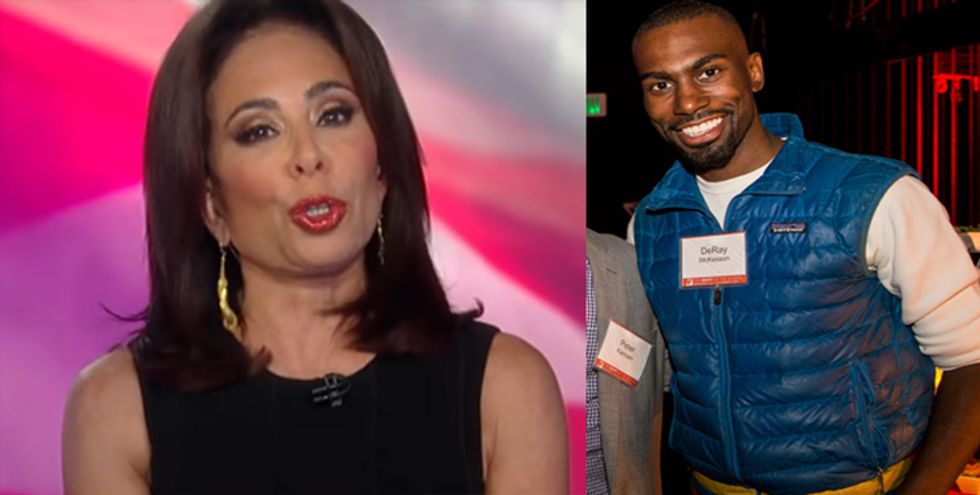 Is there a purer distillation of Fox News poison than Jeanine Pirro? She's like a speedball of vitriol, conspiracy theories, and white rage, injected into Middle America's ears at 200 words a minute. Many people are saying that this guy was tweaking after an evening of watching Justice with Judge Jeanine clips on YouTube!

It's a damn shame! Hold your loved ones tight tonight.

But seriously, we are thrilled to see that Black Lives Matter (BLM) activist DeRay Mckesson is suing Pirro for defamation over this video.

.@JudgeJeanine, I was found not guilty & I didn't direct any violence. In fact, I was protesting the violence of the police. Stop lying. pic.twitter.com/c1D4SM0VlB

On July 9, 2016, BLM supporters rallied in Baton Rouge to protest the police killing of Alton Sterling, an unarmed, mentally unstable black man, in a scuffle over the sale of pirated CDs. During the protest, someone threw a chunk of concrete which struck a police officer in the jaw, permanently injuring him. In March 2017, "Officer Doe," who insisted on anonymity to protect him from that skeeery dude in the bright blue vest and orange sneakers, sued Mckesson and Black Lives Matter for causing his injuries. It's not clear how an unincorporated organization with no leadership structure can be sued -- how do you depose an idea? And Doe never alleged that Mckesson threw the rock, told anyone to throw the rock, or was even present when the rock was thrown. But he was sure that Mckesson masterminded the attack somehow. And Jeanine Pirro, who gave up stupid shit like "facts" and "law" when she stepped down from the bench to spend a decade running for office in New York and getting her ass kicked by Democrats, was all over Doe's blame-the-black-guy theory.

Pirro: In this particular case, DeRay Mckesson, the organizer, actually was directing people, directing the violence — you can sue him, but guess what the judge said? You know what, he was engaging in protected free speech. Now I want you to guess who appointed this federal judge.

Black judge, appointed by Obama, Black Lives Matter. Gosh, what could she be getting at here? It's a mystery!

In point of fact, Mckesson directed no one and discouraged violence. Officer Doe's suit was thrown out because FIRST AMENDMENT and SHUT UP, YOU CAN'T SUE A SOCIAL MOVEMENT and BLACK PEOPLE ARE NOT THE BORG, YOU RACIST JACKHOLE. And the City of Baton Rouge had to pay out $100,000 for all the illegal arrests they made that night, including of Mckesson himself. Naturally, Pirro howled out some more nonsense about black people getting compensated when the cops didn't even beat the shit out of them. UNFAIR!

And you know what, the amazing part of this is, that DeRay Mckesson, and about 90 of the people who were protesting … actually got $100,000 from the city of Baton Rouge because Baton Rouge, they said, was very offensive to them and the police were militarized and although no one was injured, they felt that their civil rights were violated. What is wrong with this country today? The problem is when you have federal judges who make decisions based on politics. … You’ve got a police officer who was injured. He was injured at the direction of DeRay Mckesson. DeRay Mckesson walks away with $100,000 for an organization that is amorphous. We got a problem in this country.

Ain't she a peach! So now Mckesson is suing Pirro and Fox for defamation, since they made him the face of Scary Black Dudes Who Riot Against Hero Cops. Fox's defense to the suit is that Pirro was quoting from Officer Doe's complaint and thus it is "privileged." WaPo reports,

Via a statement from Fox News, Pirro tells the Erik Wemple Blog: “Based on 32 years in law enforcement, you can only be found not guilty after a trial. McKesson was not tried. I was quoting paragraph 17 and 19 from court documents.”

As the Post explains, Pirro is relying on a New York State law which allows journalists to make a "fair and true report of any judicial proceeding." Except that Pirro wasn't reporting these as allegations or attributing them to Officer Doe, and she wasn't "quoting" from the complaint at all. (Unlike Your Wonkette, she doesn't know the magic of the word ALLEGEDLY when placed in parentheses.) (Or does she?) (Let's say ALLEGEDLY to be safe!) She stated them as facts and refused to issue a retraction when Mckesson complained. There's also the little matter of Pirro being NOT A JOURNALIST, but we'll leave that for another day.

After Pirro's report, Mckesson faced a barrage of death threats. A movie theater in Baltimore had to be evacuated after one such threat when Mckesson attended a documentary screening of “The Black Panthers: Vanguard of the Revolution.” Did Pirro incite violence by slandering Mckesson and saying he incited violence? Will she be arrested forthwith for the murder of irony? We are just asking! (ALLEGEDLY.)