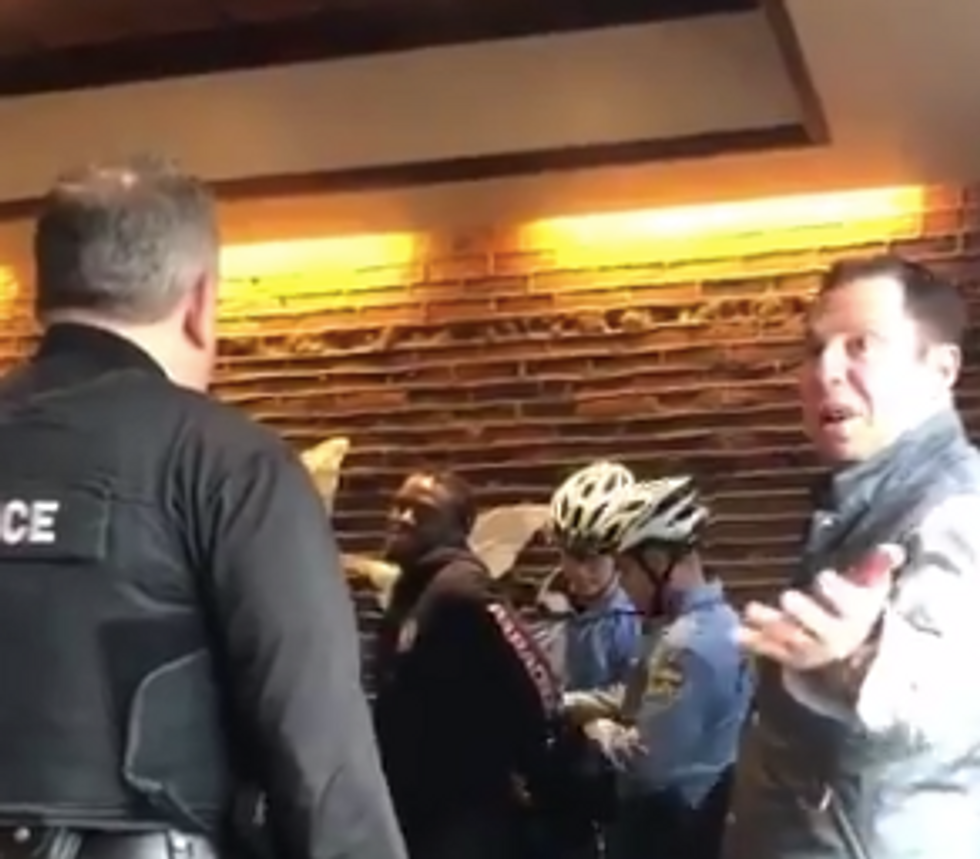 @Starbucks The police were called because these men hadn’t ordered anything. They were waiting for a friend to show up, who did as they were taken out in handcuffs for doing nothing. All the other white ppl are wondering why it’s never happened to us when we do the same thing. pic.twitter.com/0U4Pzs55Ci

Another chapter was added to the BIG BOOK OF BULLSHIT BLACK PEOPLE MUST ENDURE when two black men were arrested last week at a Philadelphia Starbucks for the serious crime of hanging out at a coffee shop.

From The New York Times:

Two black men walked into a Starbucks in downtown Philadelphia on Thursday afternoon and sat down. Officials said they had asked to use the restroom but because they had not bought anything, an employee refused the request. They were eventually asked to leave, and when they declined, an employee called the police.

This might confuse people with a passing familiarity of the Seattle conglomerate’s business model, which involves people hanging out at coffee shops. However, the manager of the Starbucks at 18th and Spruce took issue with the gentlemen waiting until a friend arrived before ordering (SOMETHING WHITE PEOPLE DO ALL THE TIME), so she called the local police, and the entire cast of LAW & ORDER: CSI (Coffee Service Investigation) showed up to escort the men in handcuffs from the premises, where they spent the rest of the day in custody before being released at 2 a.m. when someone realized no actual crime had been committed.

Starbucks CEO Kevin Johnson quickly issued an apology to the two men in an effort to reassure customers that humiliation, mistreatment, and arrest is not an acceptable part of the Starbucks experience, even for those without Gold Card status.

I want to begin by offering a personal apology to the two gentlemen who were arrested in our store. What happened in the way that incident escalated, and the outcome, was nothing but reprehensible -- and I'm sorry. I want to apologize to the community in Philadelphia, and to all my Starbucks partners. This is not who we are, and it's not who we're going to be. We are going to learn from this and we will be better for it.

This apology is the type of pablum we often hear from powerful, well-meaning white people that never goes anywhere. “We are going to learn from this.” Really? The 50th anniversary of Martin Luther King’s murder was coincidentally around the time of this incident. How does a generation of white people not learn that discriminatory racial practices is a bad thing? Why should black people take this apology seriously?

Prior to Johnson’s tenure, Starbucks had a ridiculous “Race Together” campaign, which roughly worked out to white customers discussing racial issues with mostly white baristas before yelling at them for using regular milk for their cappuccino instead of soy. But, really, if you actually have a big old, brand-identity, focus-group-tested campaign promoting racial tolerance in 2015 and then your white store managers are calling the cops on non-violent black customers in 2018, I question your ability to learn anything. You are the racial issue equivalent of Guy Pearce from MEMENTO.

And what of the store manager?

Now there's been some calls for us to take action on the store manager. I believe that blame is misplaced. In fact, I think the focus of fixing this: I own it. This is a management issue, and I am accountable to ensure we address the policy and the practice and the training that led to this outcome.

This is ridiculous. Arresting someone for waiting around in a Starbucks — again, something white people do all the time — is not an “oopsie” error like not getting the foam art right on a latte. If the manager had added strychnine to the men’s drinks and they’d keeled over, we wouldn’t accept the CEO saying, “This is a management issue and we’re going to address the policy and training that led to customers being poisoned.”

Some days later, the manager and Starbucks "mutually" came to the realization that the employee who called the police on the men was terrible and no longer worked there, or for the company at all. So that only took almost a week.

The Philadelphia police, of course, did not apologize or even consider doing so because unlike Starbucks, they aren’t actually accountable to the public. A police-run coffee chain would probably involve baristas shooting unarmed black customers whose cell phones they mistook for AR-15s and choking out any brothers or sisters who complained that their scone was too dry. “THAT’S JUST HOW IT IS! ORDER A MUFFIN IF YOU WANT SOMETHING EDIBLE!”

Commissioner Richard Ross, who apparently had no problem with his officers serving as glorified bouncers for a caffeinated night club, threw around the term “trespassing,” which the store manager also accused the men of doing. It’s almost legally impossible to “trespass” on a public accommodation. You can’t just walk into a private residence but you can walk into a public business. You’re not “trespassing.” You can argue that the men were “loitering,” which itself has an unfortunate legal history of being used to discriminate against black people, but Starbucks isn’t some fancy $100 an entree, reservations-months-in-advance establishment. It has set a clear precedent of allowing customers to wait, unbothered, for friends or colleagues to arrive before ordering a $5 cold brew. No one can complain if you’re thrown out of Vetri Cucina because you spent five hours there working on your crap screenplay while nursing an herbal tea and asking for refills of hot water. But people do this at Starbucks all the time.

White people who want to live in a pleasant post-racial dream world are clinging to every straw-shaped item in an attempt to find some justifiable reason for the manager confronting the gentlemen in the first place. “Why couldn’t the men just order when the manager asked them?” they say. Well, for the very good reason that black people are under no obligation to willingly submit to openly discriminatory treatment. Businesses can’t legally treat white customers one way and black customers another. Nordstrom’s can’t demand that only black women hand over the deed to their houses before being allowed to try on clothing.

Melissa DePino, who was present when the incident occurred and recorded the whole thing, attests to the fact that the men did nothing wrong prior to the manager confronting them. Other witnesses (also white) have come forward personally to confirm that they were allowed to use the restroom without buying anything (which the men weren’t) and had hung out for a while, waiting for someone, without incident. Starbucks has a clear racial discrimination case brewing (ha! “brewing”). Firing the manager is not “sweeping the matter under the rug” but taking decisive action. If I were the gentlemen’s lawyer (rather than just married to a lawyer — a lawyer-in-law, in you will), it wouldn’t take me long to find more (white) witnesses from the manager’s shifts who would testify that their presences were not aggressively policed at the Starbucks. And if a pattern emerges regarding other black customers (those who were perhaps asked to order immediately), well, Starbucks is up a creek.