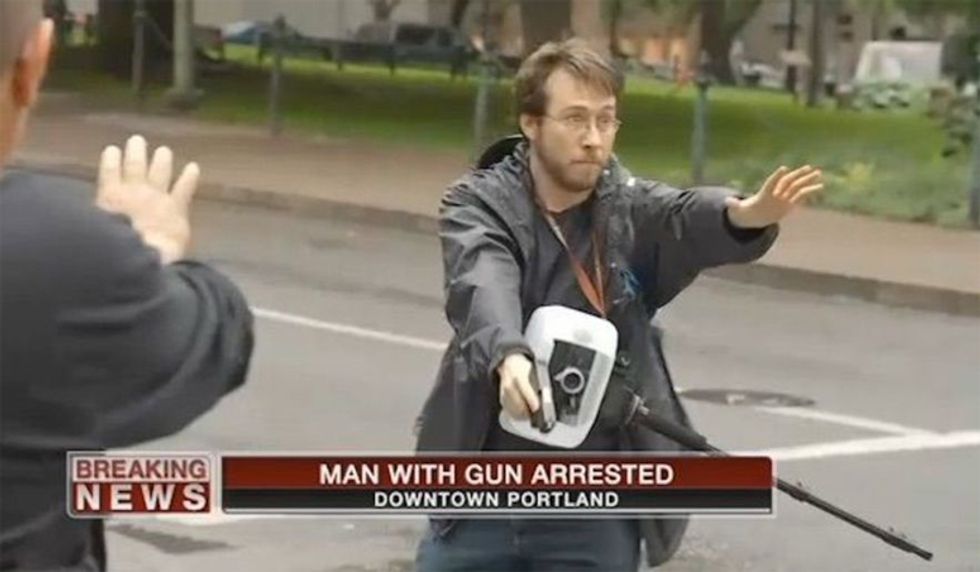 Leaving the basement can be very stressful

So here's a big surprise: A rightwing blogger who until at least July 2 worked for Jim Hoft, the Stupidest Man on the Internet, was arrested Thursday after brandishing a gun at participants in a Black Lives Matter march in Portland, Oregon. Tell us what happened, Oregonian:

A man pulled a gun near hundreds of people taking part in a Don't Shoot PDX protest Thursday evening and was later taken into custody by law enforcement officers in tactical gear.

Michael Strickland, 36, is facing misdemeanor menacing and second-degree disorderly conduct charges, according to jail records. He was booked into the Multnomah County Detention Center late Thursday night, and then released on his own recognizance, jail and court records show.

The man explained his actions to The Oregonian/OregonLive by saying he was surrounded by "anarchists" who were pushing him and telling him he needed to go. He identified the gun as a Glock.

Anarchists! They must have been very scary anarchists indeed! As it turns out, Strickland showed up at the protest with enough ammunition for a long-running gun battle -- purely for defensive purposes, you have to assume:

Michael Strickland, the 36-year-old man accused of pulling a gun on Don't Shoot PDX protesters marching outside Portland's Justice Center, had a round in the chamber of the loaded handgun he swept in front of the crowd and five other magazines of ammunition on him Thursday night, according to court records.

Multnomah County deputy district attorney Kate Molina Friday successfully argued for Strickland's bail to be set at $250,000 after two felony counts of unlawful use of a firearm were added to misdemeanor allegations of menacing and second-degree disorderly conduct.

Strickland had an extended clip in what appeared to be a Glock 26 that he swept at chest level multiple times in front of protesters and a plain-clothed Portland police officer, the prosecutor said.

Friend of Wonkette Charles Johnson over at Little Green Footballs noticed Strickland had been identified in an early edition of the story as a "conservative blogger," so he did a little looking and discovered Strickland was an occasional contributor -- often but not exclusively on gun stories -- to Jim Hoft's screaming rightwing aggravation aggregation sites Gateway Pundit and Progressives Today. Ever the student of life's little ironies, Johnson notes,

These are the people mainlining hatred to the right wing base 24/7 -- unhinged, armed, paranoid loons.

And we should note that a white guy brandishing a loaded gun was taken into custody without being harmed.

Yeah, but ANARCHISTS! The Oregonian spoke to witnesses who said Strickland wasn't exactly standing there minding his own business, maybe:

A man pulled a gun out near a group of six protesters close to the Justice Center, according to a Portland man in his 30s who said he was among the six protesters [...]

They touched him? Doesn't that mean he was within his rights to kill the lot of them while shouting "I am in fear for my life!" -- especially if they were black? Instead of arresting him, police should have given him a medal for his restraint. Court documents said Strickland told police he was simply recording the protests when protesters "went after him." We believe this, because you know how Those People attack anyone with a camera, after all.

Portland Officer Branden L. Combs was in Chapman Square during the protest and heard people running by him yelling, "Gun! Gun!'' and "He's got a gun,'' according to a probable cause affidavit.

One of the protesters told police that he had recognized Strickland from other demonstrations where he had tried to "incite or instigate others," and attempted to tell Strickland to leave Thursday night. That's when he saw Strickland reach under his shirt and pull out the weapon, the affidavit said.

Shoot, you could have a pretty good weekend in Vegas with all that stuff.

We had no idea bloggers need to be ready for a prolonged firefight/killing spree when covering protests. When Yr Wonket covered an open carry protest at the Idaho Capitol and then later a pro-immigrant rally (with open-carrying counter-protesters across the street), we only took a camera, a notepad, and a tablet computer. Then again, those gun-fondlers were merely white people walking around with guns and talking about overthrowing the government, not black people protesting police killing black people, so we can see why we didn't go prepared for a shootout.

Needless to say, the Stupidest Man On the Internet has gone all Diaper Rashomon on this story, because that is not what happened at all! No way would a white blogger ever just randomly wave a gun at protesters:

See? They weren't protesters, they were a gang of thugs and a mob, and they were obviously going to kick his ass! Or his "A plus dollar signs" which is far more family friendly, since you wouldn't want to use bad words while provoking the racist fuckernutters who read Gateway Pundit. The other interesting thing about that Hoft post: He calls Strickland "a former contributor" to Gateway Pundit and Progressives Today, although Strickland had been published at the sites as recently as July 2 and June 30, respectively. Guess Strickland must have quit/gotten fired in quite the hurry for some reason.

Hoft also posts this video, which shows Strickland backing up in a panic, then pulling his gun and waving it around because he is terrified by the gang of thugs. We're not sure it's as exculpatory as Hoft seems to think it is, since we can't actually see anyone threatening Strickland (as far as we can tell, he was walking in front of the marchers, but we can't say for certain). We're especially impressed when Strickland, having holstered his weapon, prepares to pull it again at the very scary black guy with his arms out at his sides trying to talk sense to him.

It's probably worth noting that no one is yelling "kick his ass" or "We intend to kick your ass" or "Your ass, it is going to be kicked." Still, it's a valuable video for the blogging community, since we learn a 2.5 gallon plastic water bottle can be repurposed as a handy homemade rain shield for your camera/tripod rig.

Another wingnut blog proclaims Strickland a "political prisoner" because he was merely defending himself. Not surprisingly, Hoft is also asking his readers to send money to a defense fund for Strickland, who is being oppressed by the Politically Correct Left and its stooges in the Oregon law enforcement and judicial communities.