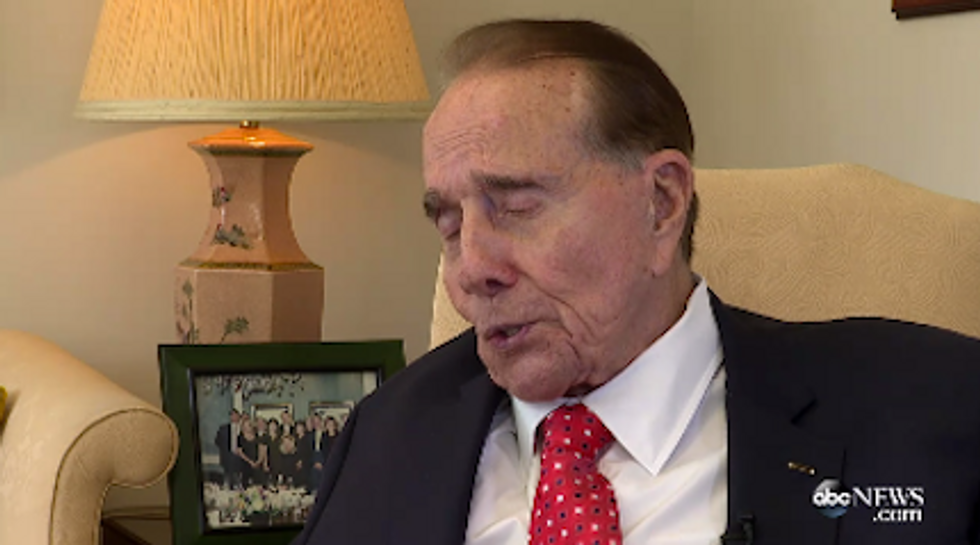 Can't you feel his excitement?

Marco Rubio is doing so awesome at winning not first place in the Republican primary! Last week, he received the "Fine, you're better than Jeb I guess" nod from South Carolina Gov. Nikki Haley, which helped him sweep second-ish place on Saturday, collecting his participation trophy and a big fat zero delegates. And now infamously soft-dicked nonagenarian Bob Dole has gotten it up just enough to give Rubio the old "Fine, you're better than Ted Cruz I guess" reach-around:

“Now that my good friend Jeb Bush is no longer running, I’m supporting Rubio,” Dole told ABC’s Jonathan Karl and Rick Klein in an interview for their new podcast “Powerhouse Politics” on Monday.

“He worked for my ’96 campaign in Dade County, Florida, and so I’ve had an acquaintance with him way back in ’96 when he was a hard worker. As much as I love John Kasich, you know, Rubio is probably a better candidate. And he’s young,” Dole added. “He wants to grow the party as opposed to [Ted] Cruz. I don’t know what he wants to grow.”

[contextly_sidebar id="szhXyfDy0piOapyfBGjezWE1Ir6Kjlk5"]Wow. We haven't seen an endorsement that unenthusiastic since Barbara Bush's desperate last-minute ad for Jeb in which she gushed, "Of all the people running, he seems to be the one who could solve the problems." And that worked out great.

We knew that Bob Dole was not likely to endorse Ted Cruz, since Bob Dole, like everyone else in the world, has made it clear that Bob Dole hates that sniveling fuckhole from Canada. Not that we were aware the Bob Dole endorsement from Bob Dole was such a highly coveted prize, but then, we're not sure calling Marco Rubio "probably a better candidate" counts as much of an endorsement anyway.

Still, given that Rubio's best performance to date has been winning second place, it's all too perfect that he nails this victory of being Bob Dole's second choice too.