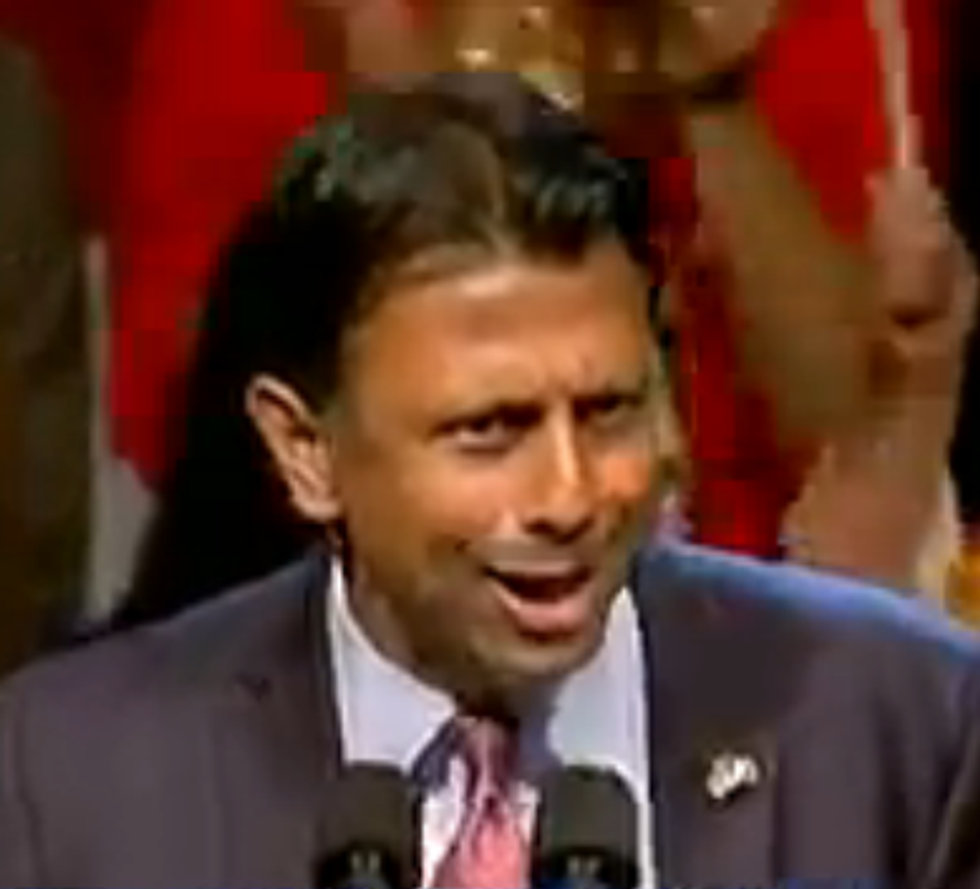 So bold, so brave

In a bold move no doubt intended to bolster his polling somewhere above his current barely 1 percent -- and to force Donald Trump to actually say his name when insulting him -- presidential candidate, Louisiana governor, and Confederacy enthusiast Bobby Jindal has called for the decriminalization of Christianity, which is impossible on account of how Christianity is not criminalized, but anyway:

Apparently, if you mishandle classified information in America, you can run for president, but if you don’t believe in gay marriage you go to jail. See, this is riDICulous.

Agreed, that is ridiculous. No, wait, it is not just ridiculous. It is ridiculously stupid. If we were actually jailing people for not believing in gay marriage, why, the prisons would be so full of Good Christian Conservatives, there'd be no room left for the real criminals, like black doctors whose husbands say cusses!

Carry on, governor, with your outrage:

Agreed, again, that this is nonsensical. And not just because "Mike Huckabee said" does not constitute an actual fact. Perhaps Jindal could point to the specific pending legislation to criminalize Christians? Or is President Obama simply going to turn Jesus-prayin' into a crime by way of executive order? Who can say? Certainly not Jindal, at least not in any way where he puts a series of words together into a coherent sentence. See, here he is, trying and failing again to do that:

Actually, freedom of speech and freedom of association are in no way dependent on religious freedom -- sort of the other way around, if you wanna get technical about it -- even though, yes, they all appear in the same part of the Bill of Rights together, good job, Bobby Jindal, pat pat pat on your little head. We have no idea where this goes next, though, because we're not sniffing Jindal's glue. But Jindal is quite sure that if we don't do something NOW to stop the mass incarceration of not-hyphenated Christian Americans, we'll soon see the IRS and other useless government agencies going "after Christian schools, Christian pastors and Christian churches."

It's funny Jindal should be pouting about the government persecuting organizations and criminalizing things that are legal, because hey, isn't Jindal the same guy who decided to cut off Medicaid funding for Planned Parenthood, which is a legal organization that performs legal services? Yes indeed, same guy. And hey, isn't he also the same guy who is actually the one doing the law-breaking, because federal law says you can't do that? Yes, same guy again!

Wow, it sure is weird how Jindal is so worried about people being unfairly targeted and persecuted and stamped "BIG TIME CRIMER" by the mean government, when he is the one who is in fact doing the unfair targeting and persecuting and BIG TIME CRIMING, ha just kidding, it's not weird, it's exactly what we've come to expect from Jindal and his fellow Good Christians, like Mike Huckabee, just to name a random example of another cock-weasel shit-breath asshole who can take his imaginary persecution and shove it up his NO HOMO butthole.

Thank god Donald Trump is right (oh Jesus, did we just say that?), and Jindal isn't going to be president.