'Bout To Get Rowdy Rowdy And Debate It 'Bate It 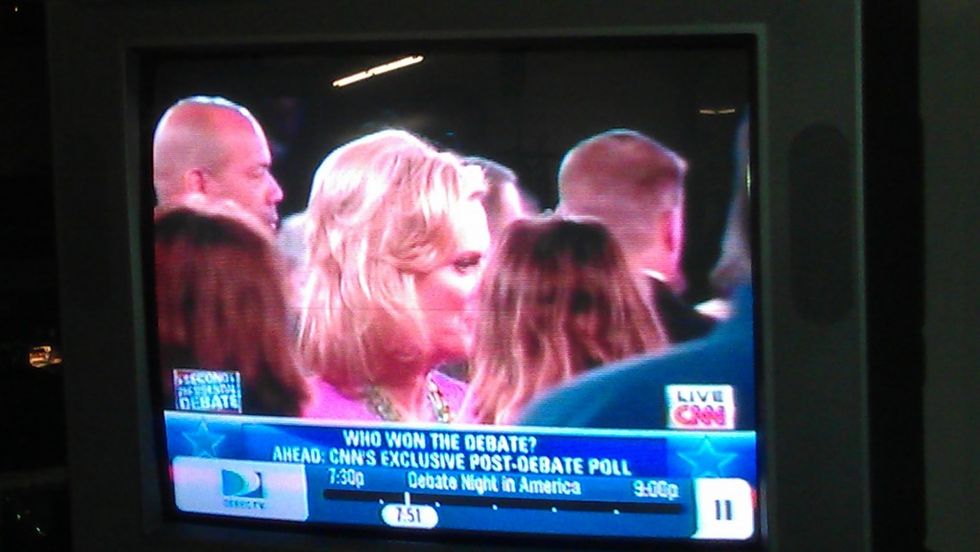 Rebecca and I are ready and set to get up in this debate shit, on the real. Tonight is the most important night of Barack Obama's life, in that he should just straight slam Five Hour Energy and then leap around onstage like he will seriously Seal Team Six the fuck out of Romney's shit.

I am liveblogging from Gooeyz on the Ohio State University campus, courtesy of the Franklin County Young Democrats. Rebecca is blogging from a velvet couch while smoking a cigarette out of a long black holder.

8:38 PM: I have not seen a group of people this white sit in a space this small since that group of college kids piled in that Land Rover at Hilton Head.

8:56 PM: Candy Crowley came out and the lady is BEAMING. I think one of the Romney sons just proposed to her, probably.

9:00 PM: The Coors Light I'm drinking is kicking in and I think I hate unions now, guys.

9:02 PM: The audience has agreed to be polite. Suckers.

9:06 PM: Hope that kid got Mitt's business card, for that job he promised him.

9:09 PM: Mitt Romney says that Barack Obama bankrupted Detroit, because Jesus how tan is he?

9:12 PM: Professor Frink out with an energy question!

9:13 PM: Obama cold talks how many millions of energy jobs he will created and undecided voters on CNN are eating it up like their cheesy fries.

9:16 PM: We worry for Mitt's arms with all the desperate people grabbing his arms and telling him things.

9:23 PM: Mitt is kind of a disrespectful sack of finely processed shit right now to everyone.

9:32 PM: Romney has entered Anger Mode. Flail Pattern failed, so now he's going after...well, the fact that Obama exists or something? It would be great if Romney would show us his tax returns so we could get a sense of how any of this will affect him maybe?

9:34 PM: Did you know Michael Jordan had a degree in math? Because Obama is going straight Jordan Undergrad Degree on Romney right now.

9:36 PM: "Of COURSE they add up," says the man who refuses to show anyone how they add up.

9:38 PM: There is a question about women in a presidential debate that's not about what men want for dinner? Huh?

9:40 PM: Mitt gives an incredibly human answer about how women existed around him and he really does recognize that.

9:41 PM: By the way, Mitt balanced the Olympic budget with $1.3 billion in federal funds. Like a true capitalist.

9:42 PM: Barack Obama officially endorses your baby-free fucking, and will be President For Life.

9:53 PM: Oh, so Mitt Romney is against the Blunt Amendment, which let employers choose whether their chick employees could get slut pills? That is good to FINALLY KNOW.

9:55 PM: Officially the most black people Romney has talked to in a night, ever. I mean, besides servers. Those aren't people.

9:59 PM: A nice Asian lady named Lorraine asked a question. Mitt had to clarify her name through her thick New York accent.

10:oo PM: Mitt Romney tries to pretend he cares about immigrants by referring to Ann's Welsh dad. The Welsh, always getting stopped and frisked by the NYPD.

10:08 PM: Romney and Obama just had a "spat", and then Candy Crowley was all like "NUH UH" and then insert a reference to The Help here

10:13 PM: Shorter Romney on Benghazi: Obama should have stopped running for President against me. ME, people. The Mitt you love

10:15 PM: Barry just stared down Mitt and dared him to step to this. Mitt is attempting to step. It is not working.

10:21 PM: BREAKING: Obama has finally come out in favor of taking guns away from the mentally ill.

10:22 PM: So, if you get married, you will no longer shoot motherfuckers that look the wrong way at you?

10:24 PM: Mitt could only have answered that gun question worse if he had fallen down and had a seizure.

10:29 PM: Mitt Romney is literally just saying words he remembers at this point. There has been no coherence to anything said since 10:15 PM. I know, because I'VE BEEN WATCHING.

10:33 PM: Now we've entered the "who loves Steve Jobs' corpse more?" section of the debate. My bet: Mitt Romney because he listens to many of the "iTunes" on his Pod player.

10:34 PM: Romney, after spending 90 minutes explaining how he knows what it takes to create jobs: "Government does not create jobs."

10:36 PM: Romney: "I am from the private sector! Also the public sector! Both of those! Whatever! Fuck this shit!"

10:38 PM: Romney would like a level playing field, like no currency manipulation and all of us working for 30 cents an hour.

10:46 PM -- Becca here again. (That was Jesse for most of that, he forgot to tell you.) We have ended. B. Barry Bamz came in with the the 47 % at the buzzer -- which we thought would be too shoe-horned, too obvious, but worked quite nicely actually!

More importantly, Barry was hardly ever boring (which is his usual debate demeanor) and Romney was his usual stuttering mess. (How you all thought Ol' Miffed was so macho and awesome in the first debate was totally super beyond us.) Barry managed to thread that impossible line between righteously angry for this dipshit being disrespectful to him, his office, and the American people, and "black man" angry, which is what Tucker Carlson sees when he closes his eyes before bed.

Haha, here is a funny thing that just happened on CNN: the "fact check" dude looked into their dueling answers on public-land drilling and found that Obama's was "true." So what was the verdict? They both "cherry-picked" their answers. Oh, CNN, you keep being you!

Sad, you guys. Pour some out for Egg Romney's hairdo.