Boy Howdy, Trump Is NOT Gonna Like This Reince Priebus Interview 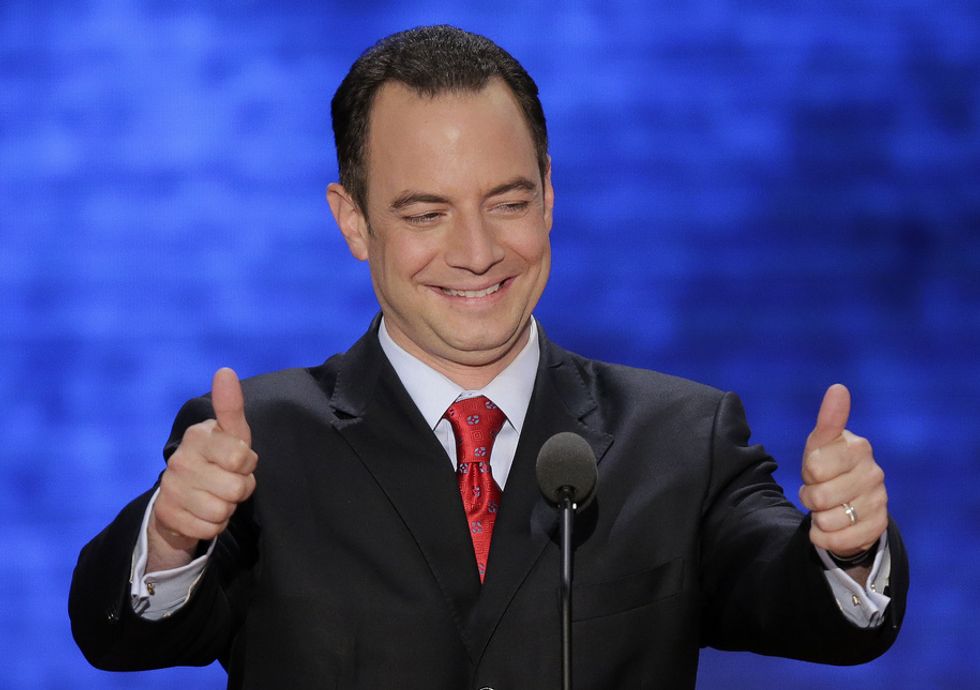 The parade of books about the first year of the shitshow-iest shitshow presidency ever to shit all over America continues apace! Today, we have an adapted excerpt from the upcoming paperback version of Chris Whipple's The Gatekeepers: How the White House Chiefs of Staff Define Every Presidency, published in Vanity Fair, and it's told through the eyes of Reince Priebus, Donald Trump's first failed chief of staff. And damn, Trump would hate it, if he had the patience to read something more than 25 words long.

Whipple recounts how the Trump White House was a disaster from the very beginning, partially because Priebus made the fateful decision to Let Trump Be Trump, while simultaneously deciding to Let Chief Of Staff Be Coffee Boy, even though literally every former chief of staff he talked to said that idea was not awesome. The chiefs even had a nice meeting in the White House during the transition, where they all told Priebus, "Hey dude, don't be a pussy." But Priebus didn't listen, because Trump was different, therefore Priebus would be different too, by sucking at his job.

It started the day after the inauguration, when President BabyShits was having a great big Sad 'n' Mad about how nobody except some lady named Billie Sue in a MAGA hat came to see him take the oath of office:

The president was livid, screaming at his chief of staff. “He said, ‘This story is bullshit,’ ” recalled Priebus. “He said, ‘There’s more people there. There are people who couldn’t get in the gates. . . . There’s all kind of things that were going on that made it impossible for these people to get there.’ . . . The president said, ‘Call [Interior Secretary] Ryan Zinke. Find out from the Park Service. Tell him to get a picture and do some research right away.’ ” The president wanted his chief of staff to fix this story. Immediately.

Priebus tried to talk Trump off the ledge. “It doesn’t matter,” Priebus argued. “It’s Washington, D.C. We’re in an 85 percent Democrat area. Northern Virginia’s 60 percent. Maryland’s 65 percent. . . . This is a Democrat haven, and nobody cares.” But Trump was having none of it. Priebus thought, “Is this something that I really want to go to battle over on day one? Who needs a controversy over the inauguration?” Priebus realized he faced a decision: “Am I going to go to war over this with the president of the United States?”

And that was the day Reince Priebus laid down and died.

How bad was it, in those early days?

“Take everything you’ve heard and multiply it by 50,” Priebus said ...

Guess the media isn't so FAKE NEWS after all.

It's not that Priebus didn't try to do stuff. He did! He tried to get Trump's tweeting under control, and even got the Secret Service to "mothball" Trump's phone, but DOY DOY DOY, Trump was hiding another phone inside his butt, just in case. Priebus ended up deciding that Trump was right, that he should be able to tweet whatever he wants, because he's Trump, and if Trump wants to call Kirsten Gillibrand a whore that day, then oh boy, what a whore she is, Mr. President!

"... After [last year’s] joint session [of Congress] we all talked to him, and Melania said, ‘No tweeting.’ And he said, ‘O.K.—for the next few days.’ [...] I couldn’t stop it. [But] it’s now part of the American culture and the American presidency. And you know what? In many ways, the president was right. And all of us so-called experts might be totally wrong."

"Gave Trump the pretext." As Greg Sargent points out in the Washington Post, "pretext" is not Priebus's word, but Whipple's, but since this whole thing was based on interviews with Priebus, it sounds like the Rosenstein letter was indeed viewed as a big fake pretext for Trump to fire Comey, in order to obstruct justice in the Russia investigation. WHOA IF TRUE!

While Priebus and Bannon watched the fiasco explode as the pundits excoriated the Trump White House on every cable news show, Kushner did a slow burn. He was livid, furious that the communications team could not defend Comey’s firing. Bannon blew his stack. “There’s not a fucking thing you can do to sell this!,” he shouted at Kushner. “Nobody can sell this! P. T. Barnum couldn’t sell this! People aren’t stupid! This is a terrible, stupid decision that’s going to have massive implications. It may have shortened Trump’s presidency—and it’s because of you, Jared Kushner!”

When Steve Bannon is right, he smells like gin, open sores, and regret, but he's right!

Days later, after Trump yelled at Sessions in the Oval Office so cruelly it made Sessions dissolve into a puddle of redneck Keebler elf tears and butterscotch wrappers on the floor, Sessions tried to resign, but Priebus saved the day by running out to Sessions's car and saying "Come on, man!" Sessions handed in his resignation anyway, but Priebus went to Trump and said, "Come on, man!" Trump backed off, but then he got mad again in July and demanded Sessions's resignation, but once again, Priebus was like "COME ON, MAN!" And that is the story of how Sessions is still attorney general, even though Trump haaaaaate him.

In the end, Priebus tried to hold things together, but couldn't. He knew things were really bad when Trump started calling him "Reincey" and made him the Official White House Fly Swatter, which is just humiliating. Also, White House Communications Director For 12 Days Anthony Scaramucci called him a felon, which was just rude. So Priebus gave his two weeks notice, whereupon Trump immediately hired John Kelly on Twitter, and Priebus was literally left standing out in the rain when he found out.

Funny that John Kelly is probably about to get quit-fired too, right? Trump sure does know how to pick winners.

There are many parts we skipped, so read the whole thing, as they say on Tumblr blogs!