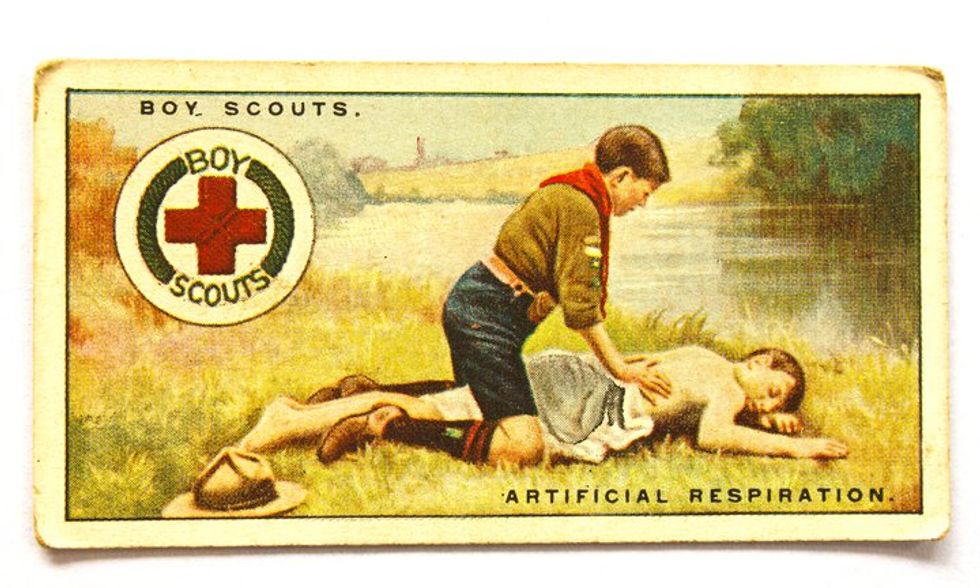 Hurray, the Boy Scouts of America have finally ended years of bigotry -- sort of -- by lifting the ban on gay adult scout leaders. We say "sort of" because individual church-led chapters still have the authority to decide they don't wanna play by the rules and can instead continue being small-minded childish bigots, like they were promised by Jesus in the Bible. This came after former Defense Secretary and current BSA president Robert Gates explained how it was just fine for scout leaders to be gay, despite the fact that the very thought of that makes wingnuts like Bryan Fischer quiver in their fearful loin parts about how this is going to immediately lead to a buttsex infestation in an otherwise Christian organization.

Now you'd think that the organization's decision to pat bigot Mormons and bigot Southern Baptists on their dumb fucking heads and say, "There there, don't worry, you can still hate fags and bully hurting gay children, we know that's why Jesus died on the cross for you Baptists, and why Jesus showed up in Missouri and taught everybody about magic underpants and how everybody gets their own planet when they die for you Mormons," you'd think that would pacify these assholes, but of course not. They're all pissed because there might be gays in an organization they're a part of, even if they're gays they'll never ever meet.

Bitch like a little bitch, Russell Moore of the Southern Baptist Convention:

“In recent years I have seen a definite cooling on the part of Baptist churches toward the Scouts,” said the Rev. Russell Moore, president of the Southern Baptist Convention’s Ethics & Religious Liberty Commission. “This will probably bring that cooling to a freeze.”

Scouting's just not fun unless EVERYBODY is gay-bashing together, because Christianity.

Bitch like a little bitch, official statement from the Church Of Jesus Christ Of Blessed Underpants:

The Church of Jesus Christ of Latter-day Saints is deeply troubled by today’s vote by the Boy Scouts of America National Executive Board. In spite of a request to delay the vote, it was scheduled at a time in July when members of the Church’s governing councils are out of their offices and do not meet. When the leadership of the Church resumes its regular schedule of meetings in August, the century-long association with Scouting will need to be examined. The Church has always welcomed all boys to its Scouting units regardless of sexual orientation. However, the admission of openly gay leaders is inconsistent with the doctrines of the Church and what have traditionally been the values of the Boy Scouts of America.

The church says it might have to start a new fancy scouting group, but oh wait, isn't there ALREADY a failing bigot scout organization for bigot scouts? Yes, there is, and it is called Trail Life, and it is for boys who know that the first rule of being a Trail Life Scout is to never do your tentmate in the butt, even if he's begging for it and saying he'll never tell, "Scout's Honor." Could the Mormons join that? No, sorry, it is not for Mormons, because they believe bad, dumb things about Jesus, which are different from the bad, dumb things the Baptists believe about Jesus. Also no Jews allowed.

So fine, the Mormons will have to make themselves appear even more like the religious cult that they ACTUALLY ARE, and make up their own scouting organization about how Jesus and the Devil are both our big brothers and there can be merit badges for not letting anybody do the gay to you through your charmed undergarments, and a badge for the first time you get to be king of a planet, and maybe the scout leaders could be those sad Mormon closet case fucks from the TLC show "My Husband's Not Gay," even though all those guys do all day is try to conceal the erections they constantly have thinking about the naked dick parts of every single guy they see walking down the street. But they're not gay, so they'll be good at being Mormon Boy Scout leaders.

This will all work out great, have fun in your new shitty scouting organization, Mormon dorks.