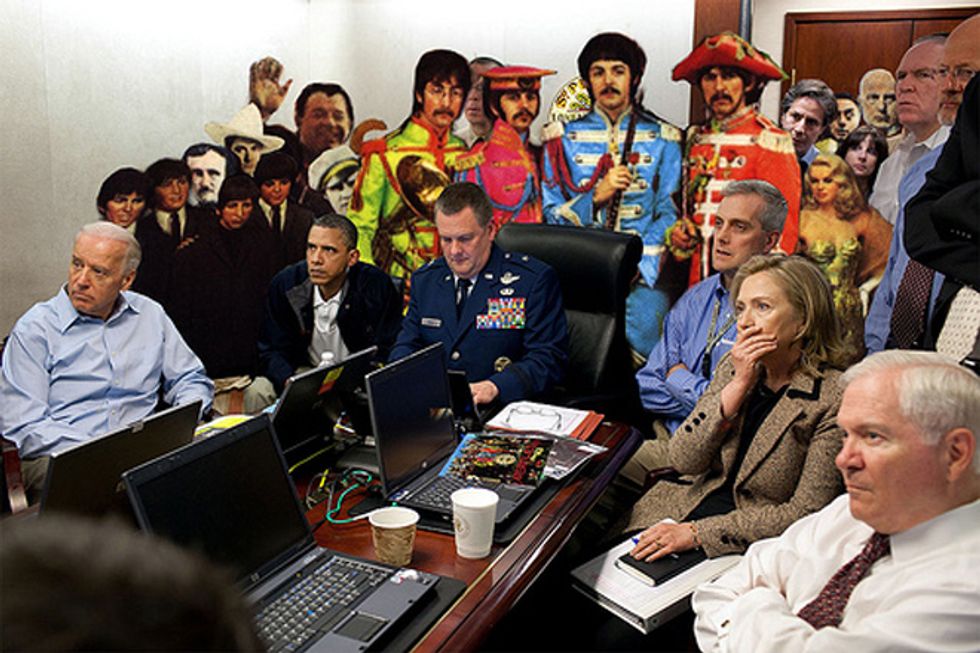 Super-Journalist Seymour Hersh has published a hell of a story in the London Review of Books about the killing of Osama bin Laden that, had it actually included any significant sources willing to go on the record, would totally change everything we think we know about the 2011 raid in Pakistan. As it is, it reads like a pretty good action thriller, or maybe a post at Alex Jones's Infowars, except written by a Pulitzer Prize winner. According to Hersh, a "retired senior intelligence official" who knows all the dirt on the raid revealed to him that almost everything we thought we knew about bin Laden's death is fake, that Barack Obama was in such a rush to take credit for the raid that he announced it too early, and that Obama lied when he said the Pakistanis had no advance knowledge of the raid. And if we had any confidence in Seymour Hersh anymore, we'd be shocked. Shocked!

The biggest jaw-dropper in the story is Hersh's maybe-revelation that Pakistan's intelligence agency, the ISI, was a full partner in the planning of the raid. You see, in Hersh's version, bin Laden wasn't hiding out in a private compound in Abbottabad, Pakistan; he was being kept there under virtual house arrest by the ISI, which also arranged for Pakistani air defenses to look the other way when the American choppers flew in. Oh, and also, Saudi Arabia was paying Pakistan for bin Laden's room and board, because why not? Sure, bin Laden had attacked the Saudi government for allowing American troops to sully the Holy Land, but maybe they had a sentimental attachment to him.

Hersh says the original plan was that the SEALS would kill bin Laden, and then a week later, a cover story would be released saying that he'd been killed in a drone strike in Afghanistan. But then one of the U.S. helicopters crashed, Obama got over-excited and had to go on TV and say "We got him!" and after that it was just one lie and exaggeration after another. In Hersh's version, there was no firefight, because bin Laden was being held by cooperative ISI agents, and the SEALs shot bin Laden in cold blood, just as they'd planned from the start. And of course, there was no burial at sea; Hersh's source says the SEALs shot him up so badly that there was little left to bury. Hersh also depicts the Obama speech announcing bin Laden's death as a hastily assembled mishmash of lies and half-truths that wasn't even vetted by military or intelligence agencies:

Obama’s speech was put together in a rush, the retired official said, and was viewed by his advisers as a political document, not a message that needed to be submitted for clearance to the national security bureaucracy. This series of self-serving and inaccurate statements would create chaos in the weeks following.

Hey, it's another appearance by Barack Obama, the feckless self-aggrandizing murderer in mom jeans, straight out lying and making stuff up, the way he does.

Not surprisingly, Hersh's story isn't exactly being welcomed as the Reporting Coup of the Year, because Big Media is all in the pocket of Big Government, and they can't handle the truth. CNN's national security analyst, Peter Bergen, has written a fairly detailed rebuttal of Hersh's story, calling it "a farrago of nonsense that is contravened by a multitude of eyewitness accounts, inconvenient facts and simple common sense." It's pretty good, and we have to credit Bergen for saying "farrago," which really deserves more use. Bergen has little patience for Hersh's claim that there was no firefight -- Bergen visited the Abbottabad compound before it was demolished, and the place was full of bullet holes (no doubt added after the raid by OBAMA). And why on Earth would Saudi Arabia, whose royal family was one of bin Laden's most hated enemies, be paying for Pakistan to keep him alive in a nice retirement home?

Former acting CIA director Mike Morell said on CBS This Morning that he was so annoyed by Hersh's piece that he stopped reading it a third of the way through (then again, he also managed to plug his own book, so maybe he's just covering his guilty butt!):

Every sentence I was reading was wrong. The source that Hersh talked to has no idea what he’s talking about [...] The person obviously was not close to what actually happened. The Pakistanis did not know. I talk about in the book how we actually mad a decision, the president made a decision not to tell the Pakistanis. The Pakistanis were furious with us. The president sent me to Pakistan after the raids to start smoothing things over.

That sounds like a pretty categorical denial, we'd say, but what you expect from someone who's obviously in on the cover-up?

But who knows? Maybe Hersh's source will come forward and go on the record, Hersh's reputation as the brilliant crusading investigative reporter who exposed the My Lai massacre will be restored, and finally, Barack Obama will be exposed for the filthy liar that we all know he totally is.

And when all that happens, Barack Obama will no doubt apologize to President-elect Trump for interrupting Celebrity Apprentice with that speech.