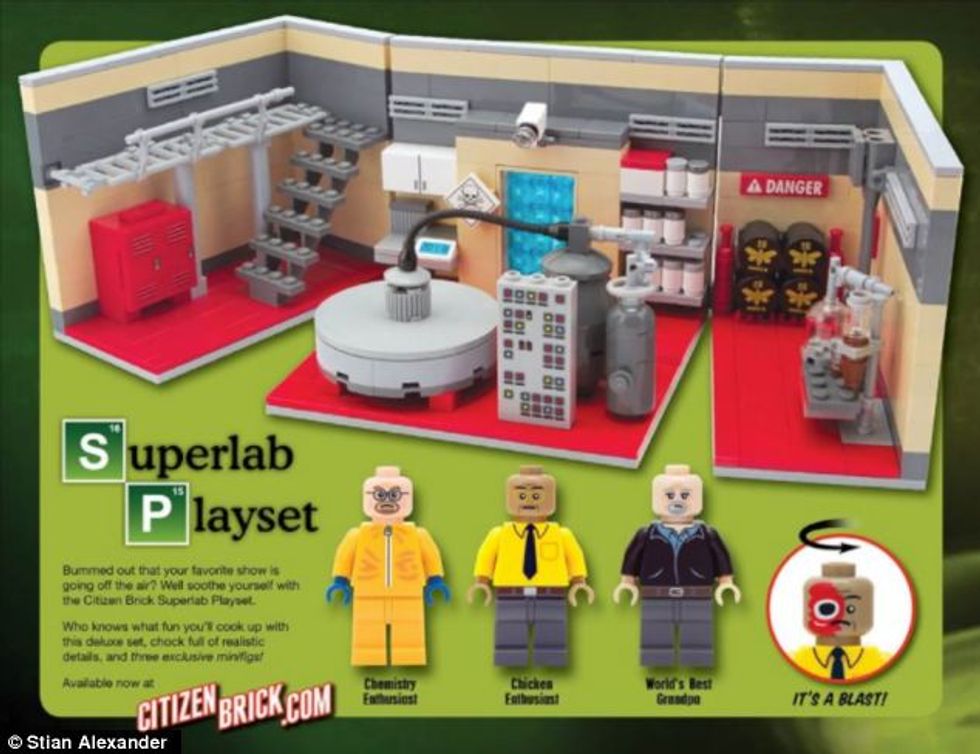 What iswith the Brits these days? Seems like all they do is get outraged with America now, whether it's our ????? in Syria, or some toy based on our teevee shows -- like this newest example of most amazing unlicensed awesomeness, a fake-lego set awesomely called "Bricking Bad" that is inspiring "outrage" (on twitter!) for concern troll Daily Mail:

Children can now build their own drug dens with a shocking new play kit inspired by TV show Breaking Bad. The sell-out £160 kit, branded 'SuperLab', lets any child or adult recreate Walter White's notorious crystal meth lab. Complete with protective masks, drug paraphernalia, figurines and a version of the car from the show, infants can even reenact scenes from the series. The toy looks similar to a classic Lego set, although it is not connected to the Danish company in any way and was made by a separate firm.

Erm, no. Infants should not play with any kind of Legos, Daily Mail, not even fake-Lego meth labs, because, choking hazard. And not just any child or adult can do this, as this thing costs £160, which is like, a million American dollars and we are having a hard time feeding our kids lunch. This set is obviously for grown ups who like to play with toys and we have some toys we like very much that we would also not let our children play with, so back up off of us.

Breaking Bad is a teevee show about high school chemistry teacher guy Walter White, who has what he thinks is "terminal" lung cancer. That sucks. So he decides to cook and sell meth to leave something for his family, because teachers are poor and healthcare will bankrupt you.

And for the Breaking Bad obsessed grown-up whose inner child is an outie, this set is a blast! It's got the old Bounder RV that served as Walter and his sidekick Jesse's first mobile meth lab, as well as the super-high-tech industrial lab that was set up under the laundromat for Walter by drug kingpin Gus Fring. The Gus Fring figure even comes with a blown-up head so you can re-enact the notorious "Face-Off" episode, where Walter blows up Gus and half of a nursing home! (Nursing home not included.)

Also not included are DEA agent Hank Schrader (because, buzzkill) or much hated wife Skyler White, because making big tits on a Lego is hard we guess? And how can you make a breaking bad fake-lego set and not include the iconic Pontiac Aztek losermobile Walter drove before he became a drug kingpin? Or maybe these are not the things we are supposed to be outraged over about this toy?

Also, did the Daily Mail not know that these things already existed and somehow escaped their outrage?

Whatever, we are not outraged, we think this is as cool as the Reservoir Dogs action figures (including duct-taped cop with detachable ear), the Dexter murder people to make the world a better place doll, and obvious gateway to meth toys from Cheech and Chong.