BREAKING: George Bush Kept Us Even Safer Than We Knew On 9/11! 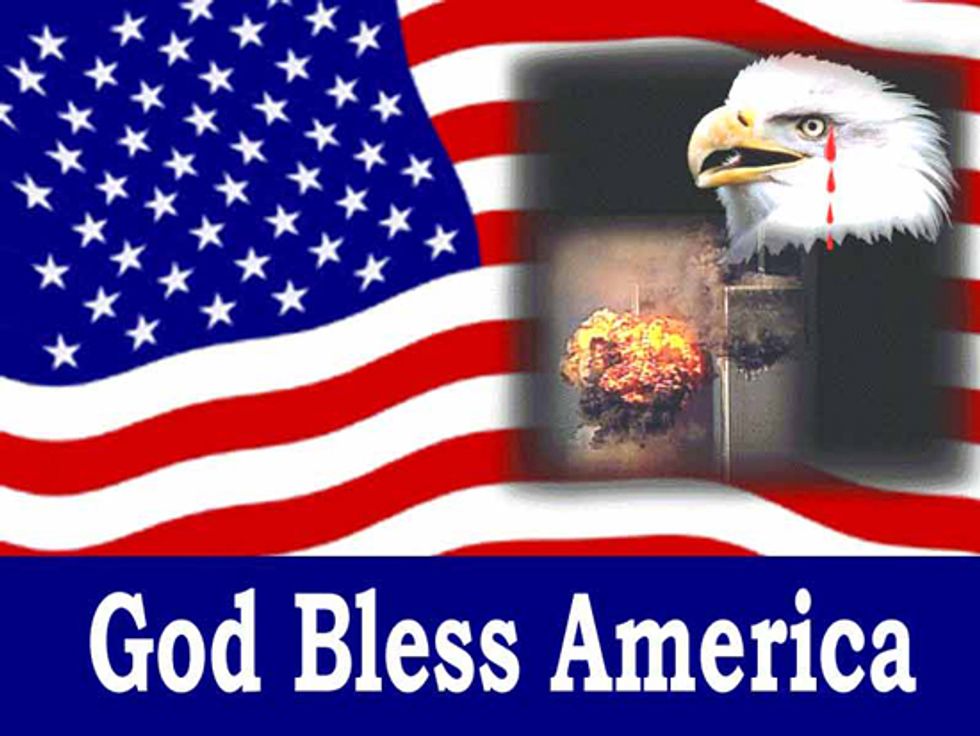 Bad news for revisionist historians who have decided to Never Forget 9/11 by simply forgetting 9/11. Or saying Bill Clinton did it. Or insisting the first terrorist attack on a president's watch doesn't count. Or all of 'em, Katie.

While George Gee Dubya was busy clearing brush and restraining himself from drinking beers and doing lines (thanks, Jesus!) during the lazy summer days of 2001, the rest of the United States intelligence community was freakin' the flip out. According to a thoroughly depressing report from POLITICO, which will make you want to SCREAM ALL THE ANGRY EXPLETIVES, they knew Al Qaeda had very specific imminent plans to launch "multiple" "spectacular" attacks within the United States. And despite frequent and urgent MUST ACT RIGHT THE EFF NOW! warnings to the Bush administration ... well, you know.

By May of 2001, says Cofer Black, then chief of the CIA’s counterterrorism center, “it was very evident that we were going to be struck, we were gonna be struck hard and lots of Americans were going to die.”

Sure, sure, some of us olds can still recite the title of the Presidential Daily Brief in August of 2001, for which Bush didn't feel it necessary to interrupt his vacay: "Bin Laden Determined To Strike In U.S." The one we learned about years after then-National Security Adviser Condoleezza Rice testified that she didn't "think anybody could have predicted" the attacks. That's old news, and we're supposed to have moved on and gotten over it by now. Ancient history, really.

But this is new news, at least to us commoners who still know relatively few details about how the hell 9/11 could have happened, because that wasn't the sort of Worst Terrorist Attack Ever that required the same level of investigation as, say, BENGHAZI!

Heres’s what went down, according to CIA Director George Tenet, on July 10 — two months before the attacks, according to our sophisticated calculations -- after the CIA's head of the Al Qaeda unit, Richard Blee, frantically reported to his boss, “Chief, this is it. Roof’s fallen in,” and they rushed to Tenet’s office:

Tenet picked up the white phone to Bush’s National Security Adviser Condoleezza Rice. “I said, ‘Condi, I have to come see you,’” Tenet remembers. “It was one of the rare times in my seven years as director where I said, ‘I have to come see you. We're comin' right now. We have to get there.’” [...]

“Rich [Blee] started by saying, ‘There will be significant terrorist attacks against the United States in the coming weeks or months. The attacks will be spectacular. They may be multiple. Al Qaeda's intention is the destruction of the United States.’" [Condi said:] ‘What do you think we need to do?’ Black responded by slamming his fist on the table, and saying, ‘We need to go on a wartime footing now!’”

And that is when we sent covert ops into Afghanistan, as Tenet and others had been advising we do RFN and ASAP, in a plan called the "Blue Sky Paper," which they faxed and texted to the whole national security team that spring. Oh, except for nah, we didn't do that because as Rice has said, she "thought we were doing what needed to be done." Obviously.

And there was one more chilling warning to come. At the end of July, Tenet and his deputies gathered in the director’s conference room at CIA headquarters. “We were just thinking about all of this and trying to figure out how this attack might occur,” he recalls. “And I'll never forget this until the day I die. Rich Blee looked at everybody and said, ‘They're coming here.’ And the silence that followed was deafening. You could feel the oxygen come out of the room. ‘They're coming here.’”

Immediately following the completely unpredictable attacks on American soil, from which Bush kept us so safe, it was “wartime footing” o’clock after all! Also, time to go shopping and take your family to Disney World. And give tax cuts to the rich. And watch what you say. And burn your Dixie Chicks CDs. And tie a yellow ribbon around your SUV and choke on it. And Never Forget, except for a few minor details. And then do it all over again in Iraq so we could kill them over there and stop them from killing us over here. You know, more.

We are still in Afghanistan. And Iraq. And now Syria, though let’s not be hasty and worry about how we’ll never get out of there either, because “fewer than 50” Special Operation forces have been deployed thus far, to try to contain the mission we accomplished so successfully in Iraq that it's spread to other countries faster than the speed of democracy. You can't even call that a war! Yet.

The good news? George's even dumber baby brother, who is taking foreign policy advice from big bro and pals and has sworn he knows how to president good because he's a Bush, is not going to be president. So Jeb will never have the opportunity to compete for Daddy's love and show the world just how safe he can keep America too.