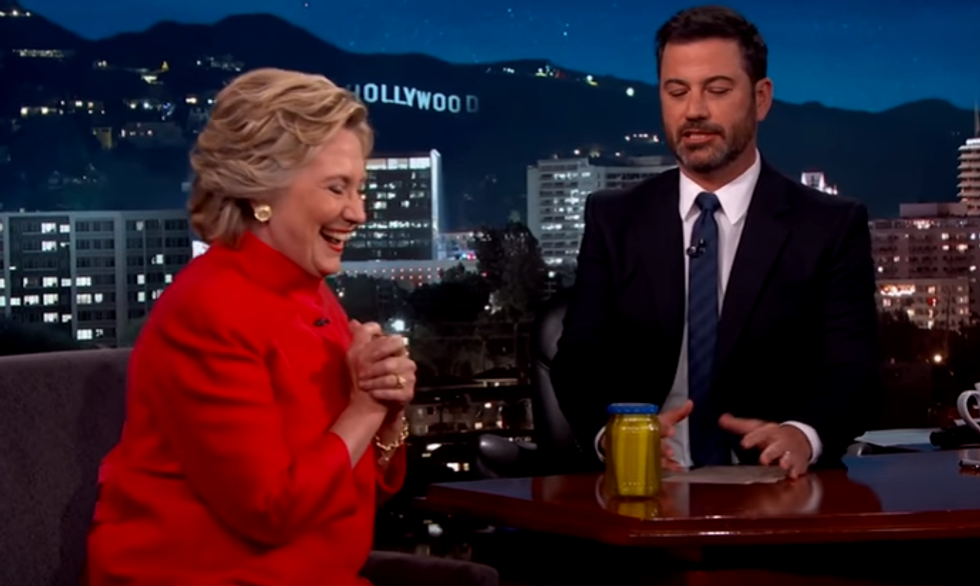 She totally faked her triumph over pickles too.

The Wikileaks, they are still leaking! And they are all fucking dumb. Sorry, Hillary-haters and scandal-watchers and basement-dwelling dorks, but the only thing America is learning is that Chelsea Clinton has gotten annoyed with all the cooks in the kitchen in the way the Clinton Foundation has been run, and besides that, we've learned deep, dark, boring secrets about how political campaigns are run.

But that doesn't mean Donald Trump, his right-wing supporters, and his de facto supporters on the snowflake baby Left aren't trying to make as much hay out of them as they possibly can. For instance, did you know that during the Democratic Primary, a leaky Wikileaky email says Hillary Clinton's campaign called young voters "fucking dumb"? IT'S TRUE, we saw it on the Alex Jones InfoWars website, where the true things are!

WHOA IF TRUE, if that is what the email says! Let's read the email for ourselves, which is easy for us to do because InfoWars posted it! Here 'tis:

OK! So in this email we have a marketing executive and Hillary-lover named Wendy Bronfein, commenting on Hillz's strategery during the Democratic primary. Hillary Clinton is, of course, not speaking in this conversation. And during the primary, we know Bernie Sanders was attracting a lot of the Kids These Days, so the campaign was working on how to appeal better to those younger voters. And since we can read the thing, we can also transcribe the thing:

It's sad but I'd also advise she needs a more trivial approach to her an [sic] arsenal. BS [Bernie] has made his campaign/movement symbiotic with a pop culture trend. HRC needs this kind of infusion to pull younger voters. And she may not be the best face of it so maybe it's trending figures to advocate for her b/c that's the crap that young people pay attention to. I hate to generalize a generation but by social media nature, they "follow." So if someone they identify as cool endorses - they will likely fall in line with that candidate.

(Don't forget Bill had "don't stop" campaign song, that was a pop culture play and had his saxophone moments. It's fucking dumb but being "cool" counts for more than it maybe should)

[wonkbar]<a href="http://wonkette.com/606861/hillary-clinton-went-on-between-two-ferns-to-show-kids-these-days-how-hip-grandma-is"></a>[/wonkbar]Wow! Now, using our secret liberal superpower of being able to read, does it seem like Wendy Bronfein, in this email we shouldn't even be reading because it's a private damned email, is saying young voters are "fucking dumb"? Well, we guess it depends on what the meaning of "it" is! She's saying maybe HRC needs to do more cool, silly things, to attract voters who like cool, silly things. She's saying it's "fucking dumb" that they have to do that, but such is the world we live in. Which is true! Good god, Obama and Hillz have appeared on "Between Two Ferns With Zach Galifianakis," because it's become generally understood, at least on the Democratic side of things, that a really good way to reach younger people is to do these fun, "cool" things. It humanizes the candidates!

[wonkbar]<a href="http://wonkette.com/598742/lets-watch-barack-and-michelle-obama-make-goo-goo-sexes-at-each-other-in-public"></a>[/wonkbar]Now, Barry Bamz is naturally better at that shit than Hillary is. Everybody knows that. (Remember when he slow-jammed the news? Or when he sent a Valentine's Day sexxxytime message to Michelle on the Ellen DeGeneres TV show?) Bernie Sanders himself isn't THAT great at it, but a lot of his famous surrogates were! So it stands to reason that, way back in February, some Clintonistas were emailing each other like, "Ugh, can we figure out a way to make Grandma Benghazi look hip?"

VERDICT: Alex Jones's Infowars site is either a liar or a total idiot, or both; Hillary's people didn't call young voters "fucking dumb"; and the latest breaking Wikileaks revelation about the Hillary Clinton campaign is that it discusses campaign strategies, OMG, BURN HER, INPEACH!!!!!!!!!1111!!