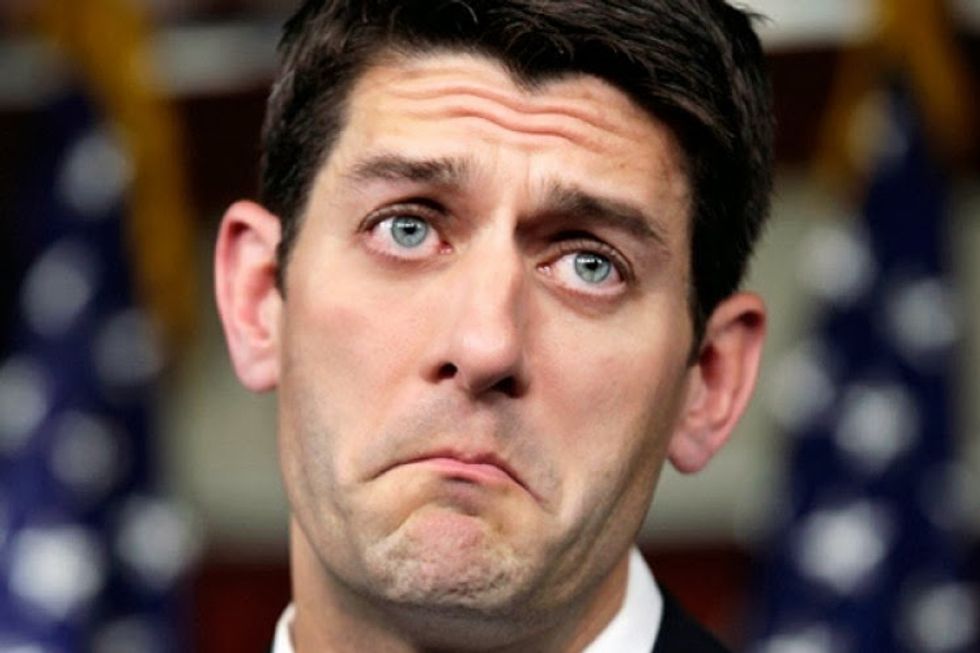 Oh darnit, tough break! After Donald Trump The Deal Maker tried like a million times to make a deal to fuck America out of healthcare (he met with the wingnut House Freedom Caucus today!), and after we were promised that the GOP would Do A Symbolic and murder Obamacare today, the seven-year anniversary of its passage, we regret to inform you that House Republicans have yet again failed to get their shit together:

President Donald Trump and conservative House Freedom Caucus members failed to strike a deal on the GOP Obamacare replacement Thursday, endangering the prospects of passage and all but assuring any immediate vote on the measure would fail.

Negotiations between Trump and the arch-conservative opponents of the bill reached at least a temporary standstill after Freedom Caucus members were told recent concessions to the far-right represented a final offer. The group rejected that, wanting more.

MORE MORE MORE! The teabaggers on the Freedom Caucus can't stop begging for a bill that hurts even more people, kind of like how their constituents beg for meth. How pathetic.

MSNBC is quoting a "senior administration" official who says they only canceled today's vote because of "scheduling," and that it will definitely surely you bet happen tomorrow, ayup!

Here is Rep. Mark Meadows, head of the Freedom Caucus, who says "progress is being made," but that they "have not gotten enough of [their] members to get to yes" yet:

Rep. Mark Meadows: “We have not gotten enough of our members to get to yes at this point” on the health care bill https://t.co/sw6s1xZTNX

Meadows added that he is "desperately" trying to get to yes, and we've already made a meth joke in this post, so fuck it. Also, we think Meadows is really loving all this camera time. Why, he must feel like a world famous congressidiot like Devin Nunes right now!

[wonkbar]<a href="http://www.wonkette.com/614552/paul-ryan-donald-trump-promise-if-you-like-your-cancer-you-can-keep-it"></a>[/wonkbar]As we reported earlier today, the GOP has been working hard to please the dumbest, meanest members of its caucus, for instance trying to make sure people can buy bullshit insurance that doesn't cover "essential benefits," because what IS freedom if you don't have the freedom to die of cancer, because you had shitty insurance?

Debate will go on as planned Thursday evening, but we're not that hopeful (we mean "hopeful" in the most schadenfreude kinda way possible) they'll get a hell of a lot done, as the more they do to appease the Freedom Caucus, the less palatable they make it for moderate Republicans in the House, not to mention the vaguely more sane Republicans who control the Senate.

How fucked are things right now? This fucked:

The House Freedom Caucus, however, has three dozen members, who have vowed to block the bill unless they get what they want. Roughly a dozen centrist Republicans also have come out against the bill.

And Paul Ryan can only afford to lose 22 Republican votes to get to the magic number of 215. Tough break, douche-hole!

Continuing his record of being always and perfectly correct about all things, White House Press Secretary Sean Spicer said Thursday afternoon, according to Politico, that "nothing leads [him] to believe" today's vote would be canceled, so we guess we should have known this would happen several hours ago.

Oh well, good job, House Republicans! We're glad to know y'all and your "president" Donald "Art Of The Deal" Trump, are still losers who constantly fucking lose. But chin up, everyone! Surely, the sun'll come out tomorrow! Bet your bottom dollar that tomorrow ... oh who are we kidding, you'll fuck it up again.

Wonkette is totally reader-funded, by YOU! So help us out by clicking the happy banners below! Also it is now your OPEN THREAD!