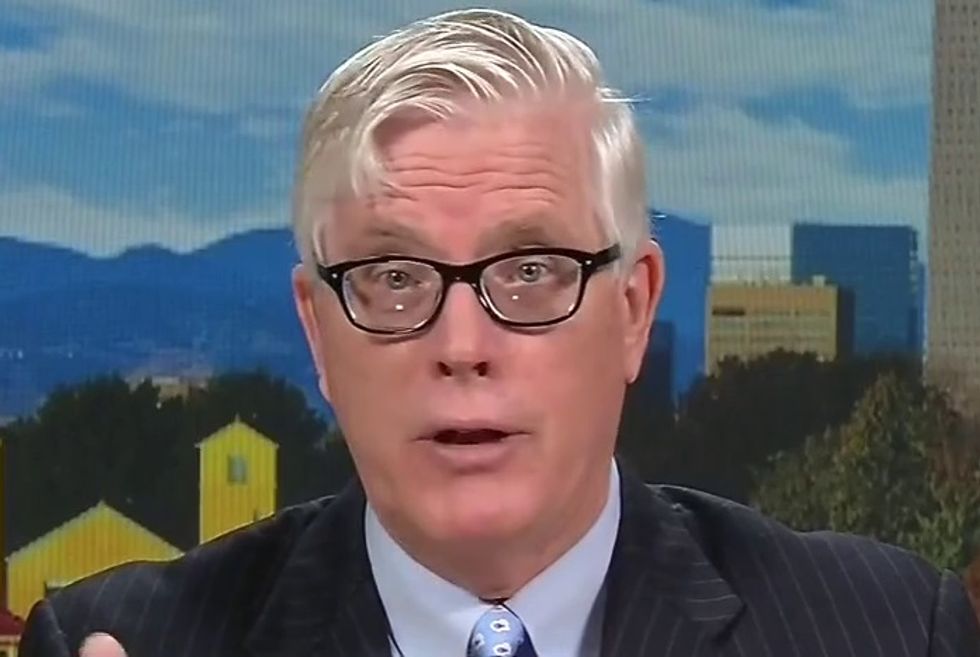 We've been keeping track of the terrible ideas in the GOP's tax bill (or the first draft, at least), and it's astonishing how many ways they've come up with to screw people for the sake of handing out giant tax cuts to corporations and the super wealthy. But wait! Maybe someone can think of a way to raise more revenue that would make this bill somehow suck even more? Hey, how about conservative gabber Hugh Hewitt, whose very existence challenges the silly old concept "it takes all kinds." Does it, REALLY?

In a Washington Post piece, Hewitt offers a solution to the big revenue gaps the giant tax cut for the rich will cause: How about we kill Obamacare's individual mandate, raise the gas tax, and impose a 5% fee on all deliveries of goods sold online? Of the three, we can actually get behind the gas tax idea, because anything that pays for infrastructure and encourages fuel efficiency makes sense. Hewitt claims killing the individual mandate (which would cause ACA premiums to spiral out of control) would somehow save money, which ignores that tax subsidies for enrollees would also go through the roof -- at least until Rs kill the ACA altogether and then no lower-income people will ever get sick again, ever.

Then there's that nifty idea for a delivery tax for online sales. Hewitt is really excited by this, which we'll assume was pitched by brick-and-mortar stores:

A 5 percent delivery fee, collected by the merchant making the sale, would not be nearly as regressive as a broad sales tax (and may even be progressive). It would certainly tap into a volcano of revenue flowing into new-economy companies that have used the existing infrastructure of roads, rails and airports to build vast fortunes.

Such a delivery fee would be similar to fees assessed on airline and train tickets. It would actually be a “new economy user fee.” That’s got to have bipartisan appeal, while brick-and-mortar establishments would cheer any small tax-code recognition that the sales taxes their customers have paid for decades provided much of the infrastructure now being used to disrupt, if not completely destroy, them.

Hewitt's fellow MSNBC commentator Charlie Sykes, who has staked out a position as the Last Sane Republican, points out a teensy problem with Hewitt's "new economy user fee":

Just think of all the happy voters who'll remember who made their Sacred Baby Festival shopping more costly! Sykes may not be entirely objective on the matter though -- he's got that book out, How the Right Lost Its Mind, and probably hopes to move some copies in the next month and a half. But publishers of e-books probably think Hewitt has a great idea: death to print!

As for the terrible ideas already in the GOP tax plan, WaPo ran a heartbreaking piece Monday about how the planned elimination of the medical expenses deduction will affect one especially vulnerable population: People who have planned very carefully how they can afford care for early-onset Alzheimer's. The story is about the broader issue of the very real disruptions the GOP war on the middle class will cause, and takes as its central example Diane Thorsen and Richard Davis. When Ms. Thorsen was diagnosed several years ago, they began carefully budgeting to arrange the best possible care as her disease progressed. Silly people, making careful plans when the Republicans need to squeeze you to cover tax cuts for the very, very rich!

They sold their house in California to prepare for the cost of care and moved to Minnesota to live with one of Thorsen's daughters. Davis planned their finances methodically; once Thorsen's long-term care insurance ran out, the daunting $98,000 bill for her nursing home would be manageable — because they could deduct medical expenses from their tax bill.

But as the Republican tax plan took shape, Davis felt as though the rug was being pulled out from under them [...]

"I kind of had everything all planned out. I had it planned out to where I really wasn't spending any time worrying about the finances," Davis said. "It's kind of a kick in the stomach to have it all figured out and then to have it kind of all start falling apart."

Tough shit with your "planning," buddy. The Party of Personal Responsibility had other plans for your money. Stop being a special interest, will you?

Aging Americans won't be the only ones hurt -- it's also going to hit parents of special needs kids, or working people with severe or chronic illnesses that cost a lot to treat. In fact, since the deduction is only available to families whose medical expenses total more than 10% of their annual income, there really isn't a case to be made that much of anyone currently taking the deduction is somehow going to be able to get along just fine without it. As we say, read the entire piece, get angry, and call your senators and representative.

You want a little more angry-making? How about the elimination of the expense deduction for teachers? That's going to be bad, as California Democratic Senator Dianne Feinstein points out. We've added on one of the replies, from a Texas teacher whose classroom is likely to become a little less wonderful if this crap passes:

Closer to home, Yr Wonkette will be hurt by these tax cuts -- the employee expenses deduction helps us stay on top of the cable news (we have to pay extra to get CSPAN, for godssakes), and small business deductions help keep the Wonkebago on the road.

But maybe it'll all be worth it, since teachers and bloggers and folks with Alzheimers won't have to worry about the Estate Tax anymore.

Yr Wonkette is supported by reader donatations. Please click here so we can continue bringing you the news you need, with the snark that makes it digestible.