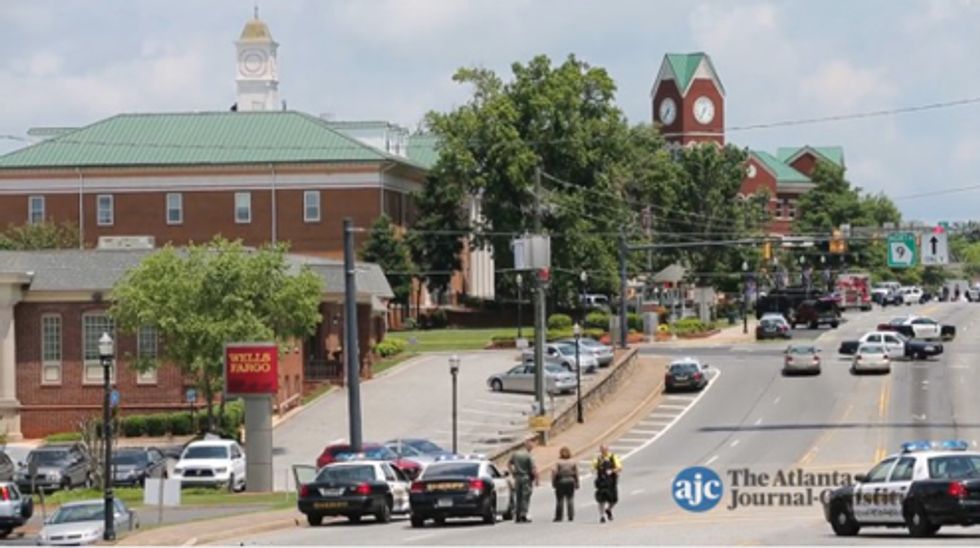 Looks like anotherSovereign Citizen was trying to start a one-man revolution against the corrupt institutions of government (or, of course, it's yet another false-flag scheme to take our Guns and Freedom). The Atlanta Journal-Constitution reports that a gentleman named Dennis Marx (so obviously another of the right's "violent liberal Marxists"), who "identified himself as a sovereign citizen" and who had been scheduled to enter a plea on drug and weapons charges, drove his SUV up to the steps of the Forsyth County Courthouse in Cumming, Georgia, jumped out of the vehicle, and began firing a semiautomatic assault rifle at the courthouse. Sheriff's deputies returned fire, killing Marx; one deputy, later identified as Daniel Rush, was wounded in the leg and is "expected to be OK," according to a post on the Sheriff's Office Facebook page.

So let's hear it for well-trained law enforcement officers, who actually are (a lot of the time!) good guys with guns.

Sheriff Duane K. Piper said that as he approached the courthouse, Marx threw "stop sticks" onto the pavement to prevent police cars from following; he also threw homemade smoke bombs and "pepper spray grenades" to try to prevent pursuit. An eyewitness said that he estimated about 90 shots were fired in the exchange. After Marx was killed, deputies found explosives and ammunition on Marx's body and in the car. He also had water and food, as well as "zip tie" bands like those used as riot control handcuffs. Piper said, “He came for the purpose of occupying the courthouse[.]”

"It would be a guess to think how many lives he saved had he not engaged him right there,” Piper said. “Mr. Marx’s intention was to get inside that front door and to take hostages.”

Obviously, information is still sketchy, and some details are undoubtedly going to be clarified as the investigation continues, which of course proves that you can't trust the media.

Sorry you didn't get to start your race war, radical-anti-government "patriot," but at least you'll rest easy in the knowledge that you're not a terrorist, you're just a "lone wolf" nutjob, and not to be held up as any kind of example of the dangers of hard-right anti-Americanism, because that would hurt some white people's feelings, and we can't have that.

So, how's that well-regulated militia workin' out for ya?