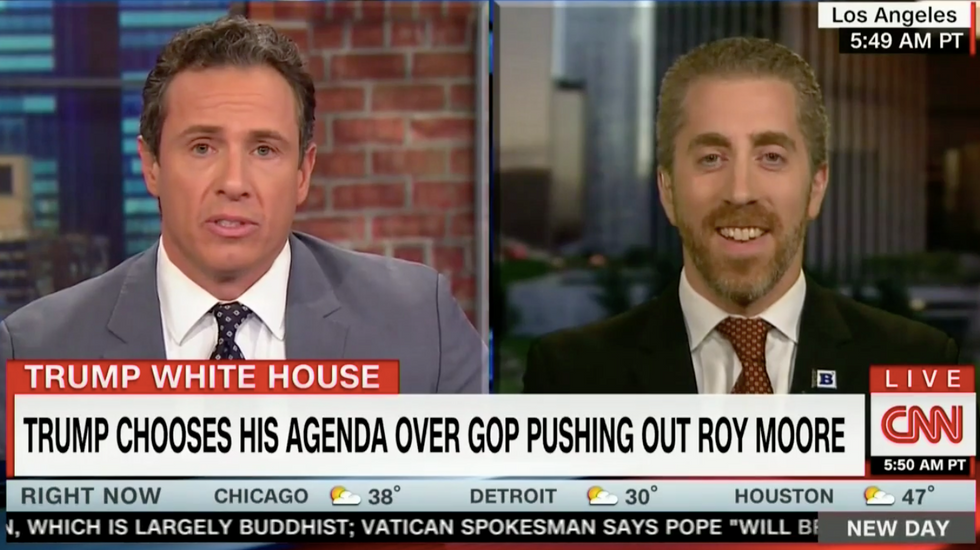 This is Chris Cuomo, anchor of CNN's "New Day":

This is the look Cuomo gives when Joel Pollak, the Breitbart editor dispatched to defend Roy Moore, goes totally off the rails:

And this is Cuomo hearing that denouncing pedophiles means you OBVIOUSLY hate The Beatles. OBVIOUSLY:

It started like any other interview with a lying hack barfing out bullshit about FALSE RAPE ALLEGATIONS! and BILL CLINTON! in defense of pedophile Senate candidate Roy Moore. But then things got weird.

POLLAK: Now, there's only one single allegation of a woman who was under legal age. So you're walking (ph) in --

CUOMO: Arguably two, right, because you had that other lady, 16, 17. She wasn't a minor, but she was very young to have somebody who's that age come on her [WE SEE WHAT YOU ACCIDENTALLY DID THERE, CHRIS CUOMO. - Ed.], let alone if it was an unwanted touching, known as assault.

POLLAK: You know, in 1973, Ringo Starr hit number one on the Billboard Charts with a song "You're 16, you're beautiful, and you're mine." And it was a remake of an earlier song. He was 30 something at the time singing about a 16-year-old. You want to take away Ringo Starr's achievement?

WHY ARE YOU TRYING TO TAKE AWAY RINGO'S ACHIEVEMENTS, CHRIS? Don't you know that everyone wants to sleep with 16-year-old girls? What are you, some kind of queer?

For those of you whose parents didn't play classical music, The Beatles, or NOTHING AT ALL, the lyrics are kind of gross in a 1960s bubblegum way:

You're all ribbons and curls, ooh, what a girl

Eyes that sparkle and shine

You're sixteen, you're beautiful and you're mine

You're my baby, you're my pet

We fell in love on the night we met

You touched my hand, my heart went pop

Ooh, when we kissed I could not stop

It's icky, but not exactly stuff that gets you banned from the mall like former Etowah County District Attorney Roy Moore. But okay, Joel Pollak. We grant you that Ringo Starr should probably not run for United States Senate!

Now, we are of the opinion that you do not have to be the parent of a human being with two X-chromosomes to understand that having sex with children is wrong. But many people seem unable to understand basic morality without analogy to property interests in their women.

POLLAK: You're also a parent and you know that when you raise sons, the risk that our sons face today is that they're going to be exposed to accusations that may or may not be true. And that's a new thing. You talk about raising daughters. You always worry about your daughters, the kind of risks they are going to face. But what our sons have to worry about is what you're talking about, where you're lumping in allegations of illegal behavior with legal conduct.

Yeah, no. As a parent of three teenagers, I spend zero time worrying that people will lump my sons' bad conduct in with crimes, because my boys don't fucking commit sex crimes! Because we talk about consent, and birth control, and the fact that no girl on earth wants to see a photo of their pink bits! Because my kids don't get their values from a Spotify playlist! (Or a movie.) They get them from us, their parents, who grew up listening to Prodigy, but do not, in fact, smack my bitch up. There are a lot of different ways to be a good parent, Joel Pollak, but none of them involves treating pedophilia like it's just a natural thing men do.

You want to put your boys off sending dick pics? Have them google "Brett Favre + green crocs." Nothing like the prospect of having a Blingee of your penis online to encourage responsible digital behavior. And speaking of the internet, WTF is in your browser history, Joel Pollak? Because you seem to think it's totally normal for middle-aged men to sexually pursue teenage girls. Are you speaking from personal experience? Because we're hoping for your own daughter's sake that you're just a craven whore who'll say any crazy shit on television, not an IRL pervert who thinks child molesting is A-OK.

So which is it, Joel Pollak? Are you a liar or a pervert?

We, as always, are just asking questions.