Breitbart Does Great Job Fact-Checking Obama's SOTU, Except For All The Facts 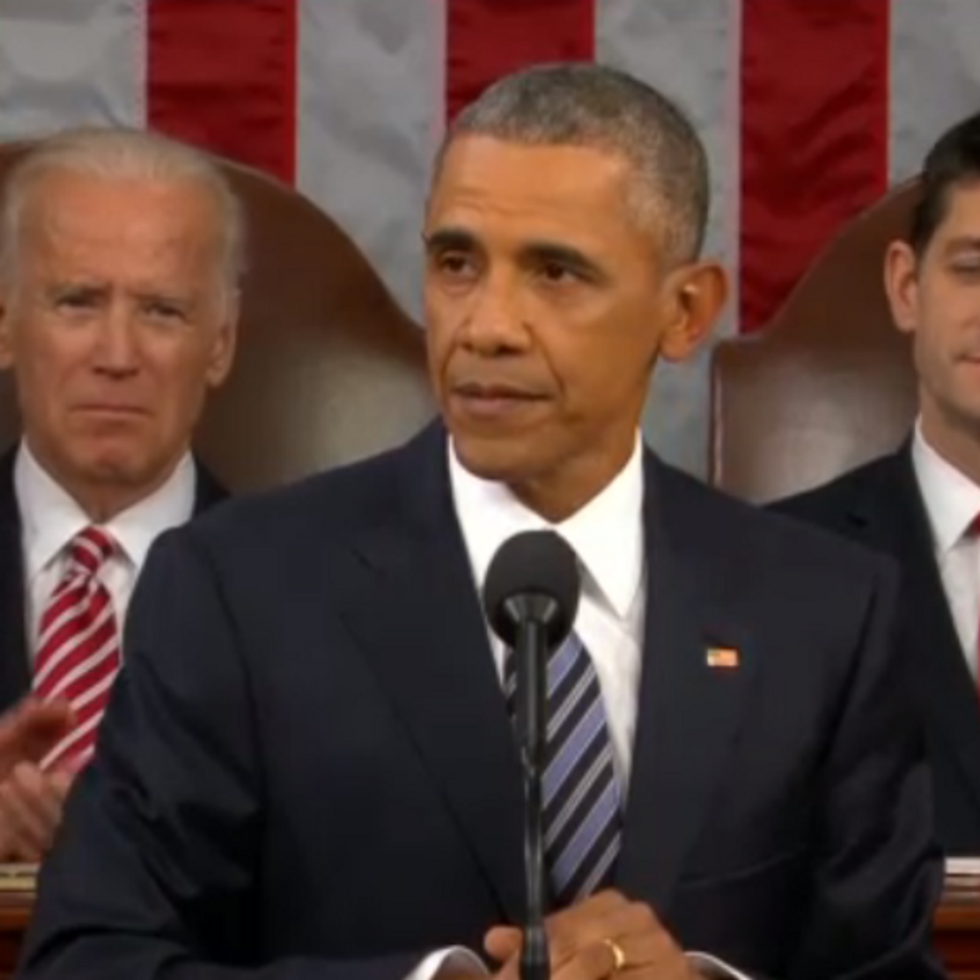 Shortly after the president concluded his final State of the Union, Breitbart -- the internet's shrieking, shit-throwing chimpanzee colony -- decided to "fact-check" the speech. It went as badly as you'd expect.

Because we really love rubbing salt in the wounds of human beings as worthless as Breitbartians, particularly Joel Pollak, the writer of this shit piece, let's fact-check the fact-checks.

1. “[W]e’ve done all this while cutting our deficits by almost three-quarters.” This is pure fiction. Obama has doubled the national debt, and it’s not because he cut the deficit. Rather, he spent staggering amounts of money in his first months in office–which he assigns, dishonestly, to the previous fiscal year, under George W. Bush. He “cut” (i.e. spent more gradually) from that spending, but only under protest, after Republicans took the House in 2010.

(Update: It is true that Obama’s 2015 budget deficit was about 25% of his 2010 deficit. But he referred to “deficits,” plural. Until last year, all of Obama’s deficits were worse than all of Bush’s deficits except for the last two.)

"Nuh-uh, he used an 's,' this counts as a lie, WE TOTALLY GOT HIM!" Good try, Pollak, but it doesn't count when even you have to admit your lead item on a list of Obama's lies only works on a technicality.

Farm implement with which Joel Pollak can fuck himself: A rake, because sometimes you gotta go with the classics.

2. “Anyone claiming that America’s economy is in decline is peddling fiction.” With that line, Obama took a shot at his would-be Democratic successors, as well as his Republican critics. But the truth is that despite the slow recovery–the slowest since World War II–labor force participation is the lowest it has been in decades. Wages are stagnant, household incomes still have not recovered from the recession, and young people see a bleak future.

Sorry, we blacked out for a minute there from pure, blinding rage. Republican complaints about stagnant wages and income inequality tend to have that effect. Also, "young people see a bleak future"? Young people are propping up the artisanal toast industry and selfie sticks; who gives a shit about their terrible opinions?

Farm implement with which Joel Pollak can fuck himself: A tractor. Just ram a John Deere right up there.

3. “That’s what the Affordable Care Act is all about. It’s about filling the gaps in employer-based care so that when we lose a job, or go back to school, or start that new business, we’ll still have coverage.” That is a cruel joke, given that Obamacare canceled insurance coverage for millions of Americans who did not change jobs. It also raised deductibles and premiums so high that many insurance companies are leaving the Obama exchanges totally.

Part A: Nope. The ACA caused millions of people to have to change plans from crappy ones that didn't cover anything to better plans that do. It didn't deny them coverage. Which you know full well.

Part B: Yeah, health care costs are still WAY lower than they were pre-ACA, so big old nope.

Hey, you know what wouldn't have either of these problems? A single-payer socialized health care system, the sort that every other first-world country has. We bet you're totally in favor of that system, right?!

Also, we fixed your copy; you forgot a space between the quote and your hyperventilating bullshit, you incompetent, disingenuous cock.

Farm implement with which Joel Pollak can fuck himself: An entire threshing machine.

4. “Food Stamp recipients didn’t cause the financial crisis; recklessness on Wall Street did.” Actually, food stamp recipients, metaphorically speaking, were indirectly responsible–as well as Wall Street sharks. Obama leaves out the government’s role, under the Community Reinvestment Act, in pushing mortgages on people who could not afford them, and in backing the derivatives based on those mortgages that ultimately burst the whole bubble.

Yeah, about that claim that Big Government is what caused the housing bubble to burst and the subsequent economic collapse? It's a made-up fantasy designed to shield evil rich motherfuckers from culpability in causing the recession.

It's also pretty funny to watch a Breitbart writer tiptoe up to the line of blaming poor people for the country's economic problems. Wait, was "funny" the word? No, sorry, "infuriating." That's the one.

Farm implement with which Joel Pollak can fuck himself: A postholer, because it looks like it would hurt.

5. “We’ve protected an open internet…”. Obama’s policy of Net Neutrality has turned Internet service providers into public utilities under an ancient regulatory regime. The result has been a sharp decline in broadband investment and a much less free and open system. In addition, the Obama administration is rushing to shift control of ICANN to the international community, which will ensure that the Internet is less free, and subject to overseas censorship.

Obama's talking about killing the Stop Online Piracy Act, you fucking choad. Remember? The legislation proposed and supported entirely by people who still think the internet is a series of tubes and opposed by virtually any organization that didn't directly stand to profit from it? Christ, even Breitbart idiots have to be opposed to a piece of legislation that could've effectively killed the internet.

Farm implement with which Joel Pollak can fuck himself: A sprinkler system, because of the series of tubes.

6. “Seven years ago, we made the single biggest investment in clean energy in our history. Here are the results.” It is laughable that Obama would claim his failed clean energy spending–think Solyndra–led to the fracking-fed energy boom we have enjoyed for the past several years, especially when the administration did all it could to stop oil and gas development. He also nixed the Keystone pipeline and started a plan to kill coal plants.

"SOLYNDRA SOLYNDRA SOLYNDRA, MAYBE IF WE KEEP SHOUTING ABOUT IT, ANYONE WILL CARE." Also: Obama's clean energy initiatives have worked, so yeah, no again. And fuck coal.

Farm implement with which Joel Pollak can fuck himself: Anything carbon-neutral.

7. “No nation dares to attack us or our allies because they know that’s the path to ruin.” Of all the lies in Obama’s speech, this was undoubtedly the worst, coming hours after Iran seized two U.S. Navy boats and ten sailors. Obama did not even mention those Americans in captivity at any point in his speech, declining the chance to reassure the nation that they would come home safely. It is an omission that will define this address in history.

Farm implement with which Joel Pollak can go fuck himself: A cattle prod, because that image is both hilarious and embarrassing for him, just like his "fact-checking."

8. “As someone who begins every day with an intelligence briefing, I know this is a dangerous time.” Obama does not attend most of his daily intelligence briefings, preferring instead to read intelligence reports–so he claims–on his iPad, a stark contrast to the attentive approach of his predecessor. Late last year, even as Obama claimed that there was little risk from attack, radical Islamic terrorists carried out brutal attacks in Paris and in San Bernardino.

[contextly_sidebar id="RAOVrxmhSakQ1ftR3JlOwiPNpm5Znf9n"]Technically true but intentionally misleading. "So he claims" is enjoyable, because now we're imagining reporters from Breitbart cracking the case with magnifying glasses like Harriet the Spy. We also like the paean to the worst president in modern U.S. history, the guy who did not actually keep us so safe on 9/11 in the first place. If that statement seems unfair to you, it's a hell of a lot less unfair than blaming Obama for Paris and San Bernardino. Hell, since the Iraq War was largely responsible for the rise of ISIS, Paris and San Bernardino are way more Bush's fault than Obama's.

Anyway, we're sure Bush didn't miss any of his daily briefings, except for during his vacation time, which accounted for over a year and a half of his presidency. Aww, but getting the U.S. mired in multiple international quagmires while setting the working class's money on fire was so hard, you guys! Poor little feller deserved a break every once in an always.

Farm implement with which Joel Pollak can go fuck himself: A shovel.

9. “We are training, arming, and supporting forces who are steadily reclaiming territory in Iraq and Syria [from Islamic State].” The Obama administration’s attempt to train and arm Syrian rebels has been a disaster. Belatedly, the administration has helped Kurdish peshmerga forces, and the Iraqi military has made gains lately, but Obama has not made a serious effort to defeat the Islamic State, and is even giving up on regime change in Syria.

Another one where Pollak accuses the president of lying, then immediately says "well, actually this is true." In this case, the retaking of Ramadi sounds a lot like "steadily reclaiming" territory to us.

Pollak keeps using that word, "lying." We do not think it means what he thinks it means.

Farm implement with which Joel Pollak can go fuck himself: A manure spreader, for obvious reasons.

10. “Fifty years of isolating Cuba had failed to promote democracy, setting us back in Latin America.” And a year of appeasement has not promoted democracy, either. The Castros remain firmly in power, and we are not helping the opposition. Worse, the Cuban regime continues to arrest thousands of political dissidents, to cozy up to enemies like Iran and North Korea, and to carry out provocative acts–such as stealing a U.S. Hellfire missile.

Pollak: "OH YEAH WELL ONE YEAR OF YOUR STRATEGY DIDN'T WORK EITHER, WE WIN TIMES INFINITY."

Meanwhile, the Hellfire missile thing did actually happen -- except it was a dummy missile containing no explosives, and there's currently no concrete evidence it was even stolen; it appears to have been shipped to Cuba by accident. Moreover, worries about Cuba selling it to our enemies are pretty fucking silly considering ISIS currently has $700 million worth of working Hellfire missiles and can't fire them, so they're probably having an ordnance clearance sale with foreign governments right now.

Farm implement with which Joel Pollak can fuck himself: A potato spinner, because much like that implement, what the fuck even is this argument?

The irony of all this? There actually were some misleading statements (although nothing that constitutes an outright lie) in the State of the Union. It's delicious, if entirely unsurprising, that Pollak managed to miss all of them.

Man, this has to be embarrassing for the idiots at Breitbart. They should really think about deleting their account before Twitter unverifies it.