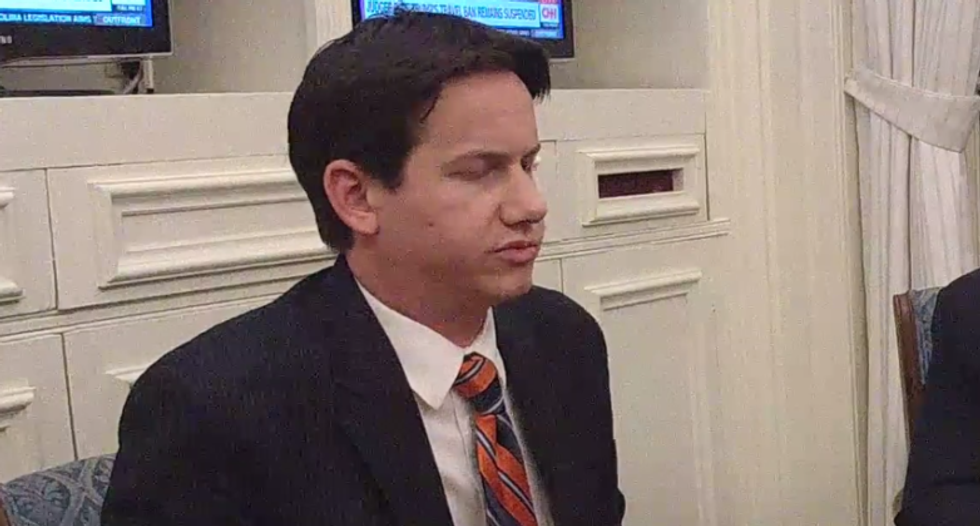 Alas, there is a caterwaul rising in Outer Wingnuttia, which is unfortunately now Inner Wingnuttia, since this White House considers Breitbart to be A Thing. On Tuesday, Matthew Boyle of Breitbart published a very sad screed about how Congress's bill to fund the government until September (the one where Democrats won all the things and Trump won nothing) doesn't have any moneys in it to build a beautiful, gold-plated wall to keep the Messicans in Messico. SADFACE! STOMPY FOOT! DADDY RACIST TRUMP PROMISED US A PONY! A VERY RACIST PONY THAT WILL BUILD A WALL BETWEEN AMERICA AND THE BROWN PEOPLE!

And even worse, Press Secretary Sean Spicer did a tweet Tuesday where he tried to pretend Daddy is building a wall, which is a big lie, because he didn't even say "wall":

Seriously, Breitbart's Boyle complained that Spicer "explicitly did not call the photos a 'border wall' on his Twitter account," but instead just said "we can build these." Unfair! All the other kids are getting border walls for Christmas and all we get are these dumb gay fences? Fuck that, Breitbart wants to go live with a new Daddy!

But THEN, even worse, a lady from the White House called Breitbart to argue that it IS TOO a border wall, but Breitbart wasn't born yesterday! Don't put Hydrox cookies in their lunchbox and call them Oreos, that's what Breitbart always says!

Spicer directed one of his deputies, Lindsay Walters, to call Breitbart News and pitch the photos in Spicer’s Tweet as a “border wall.” [...]

“There are two types of walls, a levee wall and a bollard wall,” Walters said in a follow-up email. “Both of which will help secure our borders.”

Technically, levee walls—or flood walls—are common parts of levees designed to deal with flooding. The Rio Grande river constitutes much of the U.S.-Mexico border, so levees—and “levee walls” as Walters argued—are a part of that. They are not meant for border security, but rather for flood management.

But, Walters said in a follow-up email that “A bollard wall and levee wall of this scale will prevent illegal immigrants from crossing the border.”

Here is some video, for you to LOL at: