Breitbart Thrilled To Once Again Not Prove Existence Of Paid Protesters 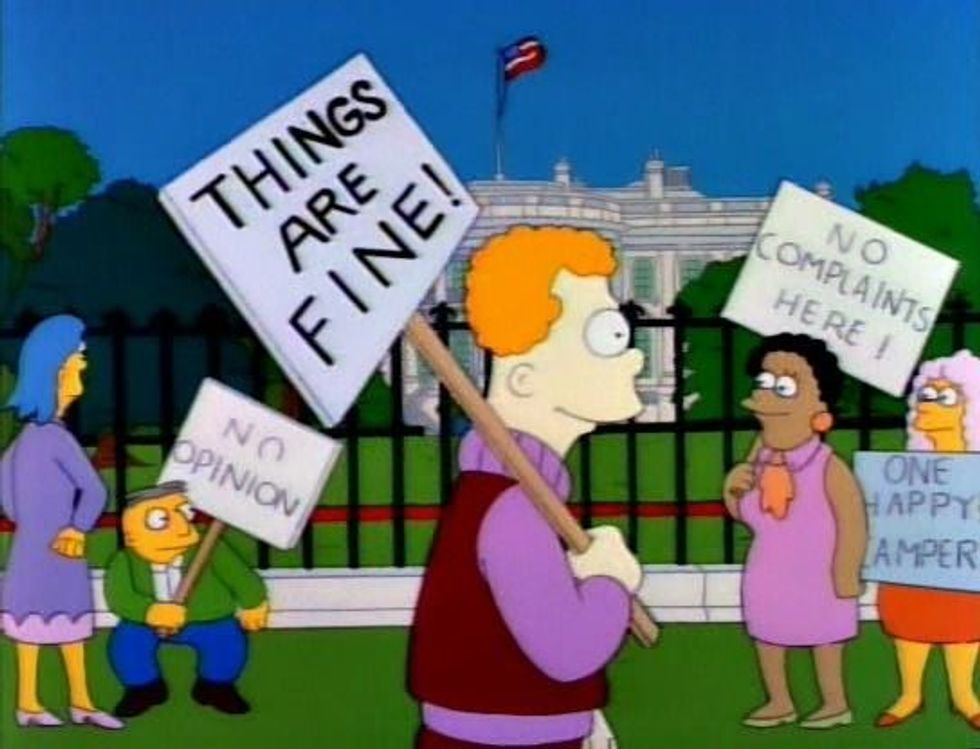 How people would protest Trump if they WEREN'T getting paid!

Has Breitbart FINALLY proven the existence of paid protesters? They'd certainly like you to think so!

The site published an article on Monday titled "San Francisco Chronicle Admits: Some Anti-Trump Protesters are Paid." Upon first glance, this sounds simply shocking! A newspaper from such a notoriously liberal area as San Francisco confirming the inane conspiracy that people are getting paid to protest Donald Trump? Scandalous!

Despite the left’s attempt to deny it, some anti-Trump protesters are indeed paid to show up — including those from a growing number of tech companies who are paying their employees to participate in anti-Trump rallies.

The San Francisco Chronicle reported on Saturday, in an article titled “Bay Area demonstrators may be paid to protest, by employers,” that the “common accusation lobbed at liberal protesters” that “they’re being paid to protest” is at least partially based in fact.

Woah, if true! Employers? Giving their employees money to go protest Donald Trump? That just does not seem right!

Except that the article in the Chronicle does not actually confirm the deeply held belief that there are no people out there who oppose Donald Trump, only people who are being paid to pretend that they do for piles of cash money from George Soros, the only person on earth known to not support Donald Trump, for reasons of evilness.

The article is actually about some companies allowing people to use their paid time off for political activities, which would, yes, include protests. This is very, very different from "Go protest Donald Trump, and we will give you some money!" It's also not even particularly special, because most companies don't prohibit people from using their paid time off in that way, or in any other particular way. It's your paid time off and you can use it any way you like.

What really grinds Breitbart's gears though, is the fact that a few companies are allowing people to take days off for civic engagement. Like a small marketing company called Traction that is instituting a policy called "Days of Action" wherein employees get two paid days off for political activity or volunteerism of whatever kind floats their boat.

Traction, the creative agency I run in San Francisco, has a introduced a new policy called “Days of Action” in response to the increasing trend of budget cuts and divisive political discourse since the presidential election. This policy encourages employees to take up to two paid days or each year to contribute to the greater good.

We are giving all employees two days of paid leave per year to participate in our democracy—however they see fit. They can march on Washington, volunteer at the Boys & Girls Club or some other organization that had its funding cut off, or be a poll worker.

Ah yes, that sounds exactly like people getting explicitly paid money to protest Donald Trump! Who would interpret it otherwise? Certainly not Breitbart! Certainly not the geniuses who have since flooded Traction's Facebook page with one-star reviews!

“People were wishing that I was dropped off in an (Islamic State) territory, calling me an idiotic libtard, candy-ass, saying they hope we’ll go out of business. Really nasty stuff,” Kleinberg said. “We’re in marketing, so we talk all the time about making an emotional connection with people. And once we announced (the policy change) it became clear that we struck a powder keg.”

A plague of 1-star reviews began cropping up on Traction’s Facebook page from people who had never worked with the firm, decrying the company’s left-leaning leadership and alleging anti-Trump propaganda. Hashtags urging others to boycott the company started to circulate.

Kleinberg admits that he was motivated to start the policy following Trump's election, and that he is not exactly too fond of Trump himself, but says the new policy does not discriminate against people based on their viewpoints. Which means he could be just as likely to "pay" someone to go to a Trump rally as to an anti-Trump protest.

But Breitbart commenters are not buying that! They know all the protesters are paid! They are glad the Chronicle is finally admitting what they all know, that we are all being paid by George Soros!

Who is also paying people to go to the Breitbart comment section and pretend to not like Donald Trump!

I, for one, would never accuse the trolls who come to Wonkette of being paid shills. Primarily because I cannot imagine a world where anyone would pay for that.

They also know all the protesters back in the '60s were only pretending to be against the Vietnam War in order to get sweet, sweet protesting money!

This comes as quite a shock to me, personally. How much money were my parents paid to be against the Vietnam War if they are still really pissed off about it now? Is it an ongoing thing? And why is this a thing that has been primarily discussed in the privacy of their own home? Are we like a Nielsen family? Are we being monitored somehow? Does my mom get paid every time she utters the phrase "Motherfucking Richard Nixon?" It is a mystery!

The belief in paid protesters is a fascinating one indeed. Those who believe in them tend to believe that political correctness and cultural marxism are ruining their very lives, and that they are constantly being tortured by those of us on the Left who think they are racist and sexist just because they say racist and sexist things. We are everywhere, and they are sick of us! But also we are imaginary! What that says about them, I'm not entirely sure. I would, however, love to know where my goddamned checks are.