Breitbart Watch: If You Exclude Every Vote For Clinton, Trump Won With 100% Of The Popular Vote! 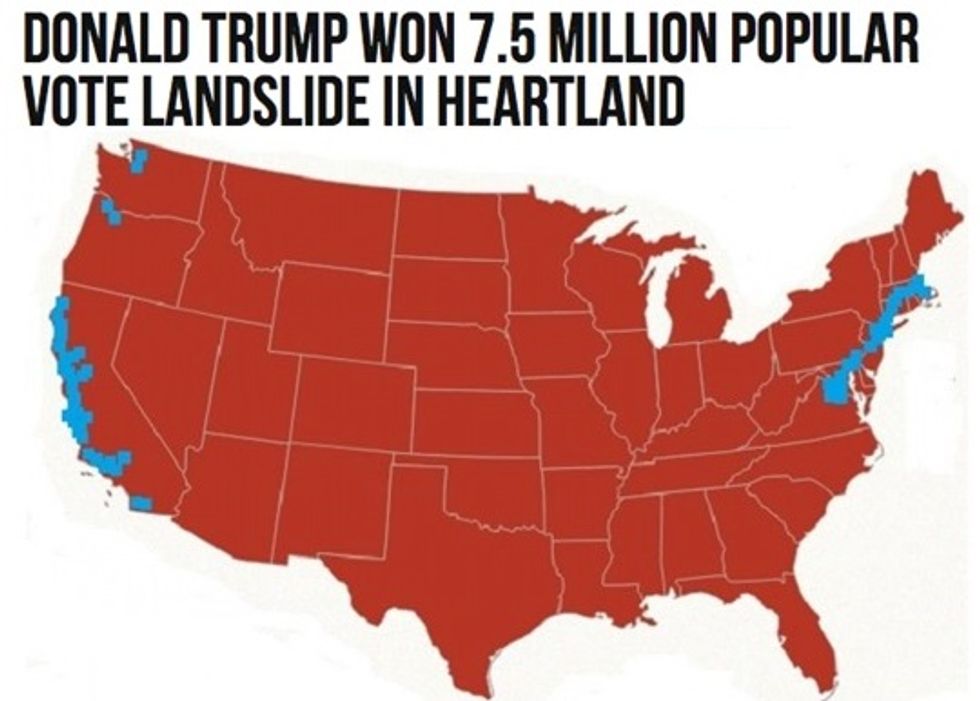 Welcome to Wonkette's new feature, "Breitbart Watch," where we keep an eye on the goings-on at Dead Breitbart's Home for Free-Floating White Rage, aka America's New Pravda. With the ascension of former Breitbart head Steve Bannon to the official position of Trump Whisperer, Breitbart.com is now about as close to an official press organ the Trump Administration has, with a perfectly normal-sized handprint on media coverage, so we figure we should make sure we know what's up in Breitbartland. Today: Fun With Lying With Maps!

For instance: Did you know that Donald Trump won the popular vote by an astonishing 7.5 million votes, at least in "The Heartland"? it's true! Just look at this map, published yesterday (and later replaced) at Breitbart:

As everyone who hasn't read Marc Monmonier's invaluable How to Lie With Maps knows, maps don't lie, and there you have the proof: America on Election Night was a sea of electoral red, with only a few piddling votes for Hillary Clinton at the margins of the nation, in the sin-filled coasts. Of course, if you're a nasty old cynic like the Washington Post's Philip Bump, you may be inclined to question the accuracy of this map, apparently done in MS Paint by the article's author, Michael Patrick Leahy. Bump, one of those Media Elitists, sneers at the map, saying the "only appropriate way to describe this map [...] is 'hilariously idiotic.'" Mr. Bump, don't you see that sort of invective directed toward Real Americans is why Trump won? You People in the Media made this map happen!

Bump, clearly some sort of communist America hater, presents instead this county-by-county electoral map, which has some slightly different blue spots on it:

Based on AP data; see link for full-size map

At least he has the decency to admit it was prepared by the communists at the Washington Post. That crazy map would have us believe that Hillary Clinton won counties in every state but Oklahoma, which is ridiculous, since as any fool can see from the Breitbart headline, Trump won the Heartland. Bump also takes issue with Leahy's methodology, because that's what Media Elites do: tear down the hard work of real Americans, which makes them so mad they have to vote for a fascist who'll protect them from mean liberal "facts" they don't like. Leahy's Breitbart analysis is perfectly straightforward:

Donald Trump won an overwhelming 7.5 million popular vote victory in 3,084 of the country’s 3,141 counties or county equivalents in America’s heartland.

That's not good enough for Bump, who says there are a lot of "weird qualifiers" in that explanation, and points out that if you want to get all technical about it, Leahy's numbers are "wrong," noting that data from some counties still isn't available, but of 3,110 counties (or equivalents, like Louisiana's weirdass "parishes"), Hillary Clinton won 487, while Donald Trump won 2,623. And most of the counties she won have cities in them, which is why Clinton's national popular vote lead is over 1 million votes, and is expected to double.

But hey, if you exclude the most populous counties where Clinton won, then you've got "the heartland," where Donald Trump rules a sea of red. Bump points out this doesn't make a hell of a lot of sense, not even geographically:

As it turns out, what Leahy’s doing is simply taking 52 counties where Clinton did well and eliminating them from the equation. Those 52 “elite” counties are mostly those that clumsily dot their way across his map above. All of this is totally arbitrary, of course. Everything that isn’t one of those “elite” counties is the “heartland,” an area that Leahy figures includes Long Island, Maine, Detroit and Charleston, S.C.

You know. The heartland.

By Leahy's reckoning, Clinton only won in a "narrow band of elite coastal counties," which also happens to be where "virtually all members of the mainstream media reside." That narrow coastal band of the country, if you look at the actual county map, includes such "coastal" enclaves as Sacramento, Chicago, Atlanta, and Madison. Not to mention Nashville, the nation's 25th-largest city, the county seat of Davidson County, where Clinton won by 26 points. Among those disgusting coastal elitists in Nashville is Breitbart writer Michael Patrick Leahy (or so says his Twitter profile), clearly a member of the media elite himself.

Still, it's a pretty impressive enterprise, as even Bump admits:

Wow. Simply set aside millions of votes, and the outcome changes. And here people are saying Clinton won the popular vote! Shaking my head at those elite media folks in their coastal mansions.

Here in Yr Dok Zoom's coastal elite city of Boise, Idaho, where most precincts went to Clinton, we can only sit in our palatial one-bedroom apartment and gaze in astonishment at Trump's incredible victory in the heartland.

Oh, and Breitbart eventually stealth-updated its map, with no note that it had changed anything, though as you can see, it's still only an approximate match for the (communist) county-by-county map:

We'll close with a pitch from our favorite group of fictional truth-tellers, Cartographers for Social Equality:

Maps: They're not supposed to freak you out.