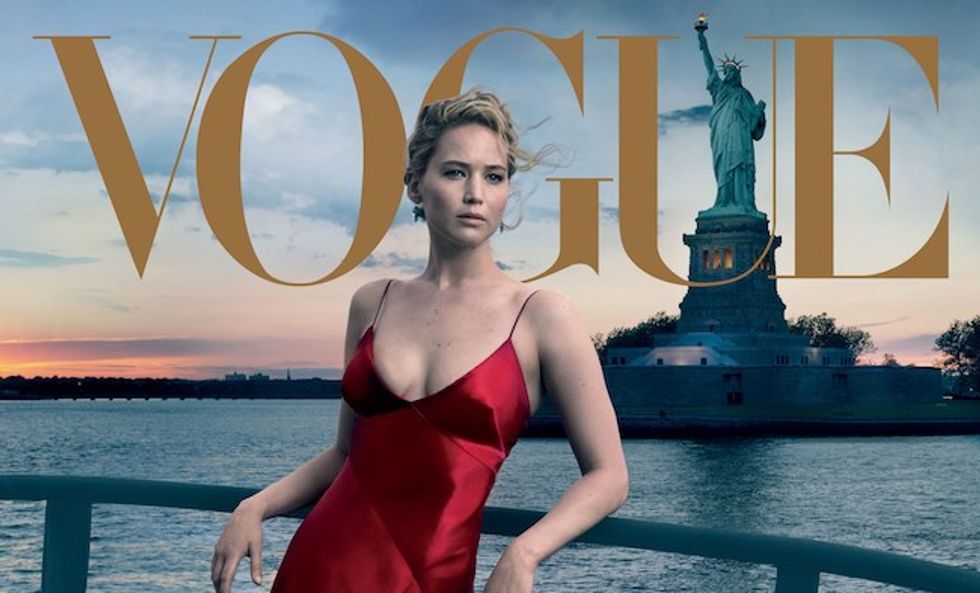 Breitbart writer John Carney is very upset. You see, he was all excited for Vogue's 125th anniversary issue, eagerly anticipating the treasures he might find within -- only to discover that one of the four covers of the issue featuring Jennifer Lawrence was a DIRECT ATTACK against him and his fellow conservatives.

What could be so very terrible about this cover, you wonder? What on earth about Jennifer Lawrence, a white lady from Kentucky, riding on a boat by the Statue of Liberty, could possibly be so offensive to John Carney that he needs to start his own fashion magazine? Well, let's take a CLOSER look, shall we!

Ah yes, that's it right there!

Carney then explained that it was all CONTEXTUAL because it was released after that time Stephen Miller thought that "The New Colossus" was written after the statue was erected (it was actually written before, in order to raise money to build the statue).

Of course, the thing with the way fashion magazines work is that this cover would have been shot at least three months before. Not knowing this could be a hindrance to Carney when he takes over the fashion industry.

Carney also suggested that perhaps Breitbart should get in on the fashion stuff, because women would be super into that.

Oh yeah, for sure. Can totally see it. Breitbart Fashion: For Women Who Also Think Women Are Stupid.

Later, Carney cited the Left's "reaction" to his tweet as proof that there was, indeed, a conspiracy at Vogue to hurt his feelings and make him feel like they think immigrants are better than him.

After Vogue Communications director Zara Rahim explained to him that they shot the cover in June, because the September issue is pretty important, Carney tried to say that he was just teasing, but also that he was serious because when did they decide to use it as the cover, huh?

It's honestly kind of fascinating, though, to see the way these people think. Like, they cannot wrap their heads around why black people might be offended by them saying the n-word or might not want them to touch their hair or might not like getting murdered by police on the regular, but OH MY GOD THE STATUE OF LIBERTY IS ON THE COVER OF THE ANNIVERSARY ISSUE OF A NEW YORK CITY BASED MAGAZINE OH GOD WHY ARE THEY HURTING US SO?

I am also curious about what this Shadow #MAGA Cultural Industry will entail. Are they going to sing? God, I hope so. I hope they do a Breitbart Cabaret and Fashion Show, because that would be endlessly entertaining.

Give us some money so we can continue being more fashionable than John Carney, in order to spite him. Click below!