Breitbart's Big Scoop: One Of Roy Moore's Accusers Was Not Going To Vote For Him! 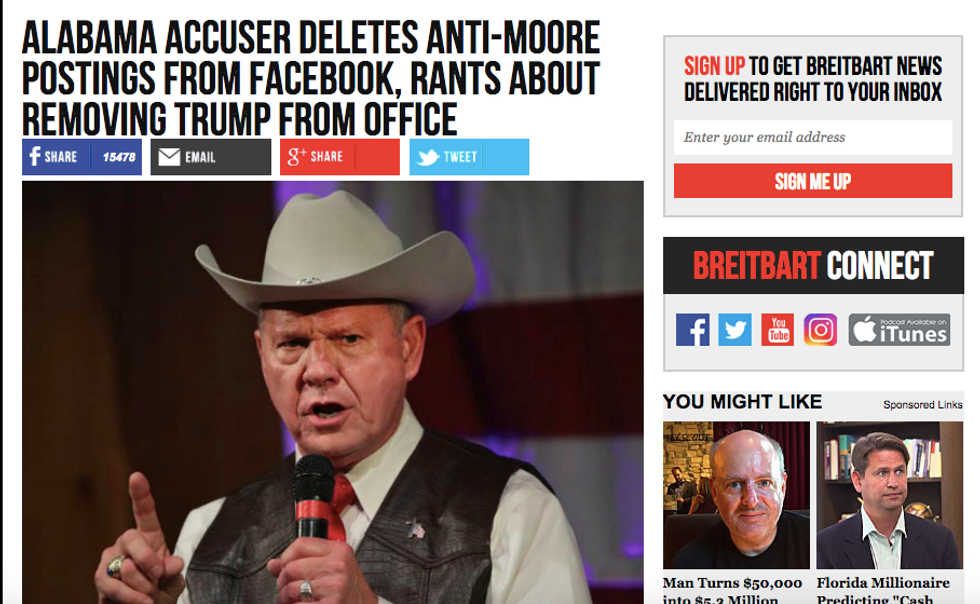 This morning, the phrase "rants about removing Trump" was trending on Twitter. And not for a fun reason like a bunch of people ranting about removing Trump. It is because Dead Breitbart got a big scoop on one of Roy Moore's accusers, Deborah Wesson Gibson. Yes, the crack investigative team over there did a deep dive into one of his accusers Facebook pages to discover... that not only did she not like Donald Trump, but also that she did not plan on voting for Roy Moore in the upcoming election. In fact, she planned on voting for Doug Jones, the guy who didn't even "date" her when she was 16!

Some of those postings by Deborah Wesson Gibson were critical of Moore while one was related to Moore’s Democratic opponent, Doug Jones.

One posting shows a picture of Gibson with Vice President Joe Biden and says that she did work for him in 2012. One older version of that image is still on her page while another more recent posting of that same image in response to a posting from Jones’s official campaign Facebook page was removed, but was captured by Breitbart News.

Reached by Breitbart News, Gibson said that she has no comment on the removals of her Facebook posts.

Other posts still active on her page repeatedly urge the immediate removal of President Donald Trump from office and show that Gibson “likes” far-left activist groups. She also pushed a petition drive to remove Steve Bannon from the National Security Council last February when Bannon was serving as the White House chief strategist.

Oh my, that is shocking! I mean, who among us would turn down the exciting opportunity to vote for the old dude that creeped on us when we were teenagers? I, for one, only wish I could track down every creep who cat-called me from his car when I was a middle-schooler and fiercely encourage them to run for office so that I might have the opportunity to help elect them. Because that is certainly who I want running things!

Clearly, this is all a vast conspiracy that goes right back to Joe Biden. Somehow.

Of course, the woman who made the most damning claims against Moore said she voted for Trump, but this other one here did not. In fact, according to Breitbart's Joel Pollak, Gibson shouldn't even be in the story, because she was 16 when she "dated" Moore, and how is it not normal for a 32-year-old man to date a 16-year-old girl? That is the most normal thing ever! So very natural! And acceptable!

It seems that Moore's supporters cannot quite figure out whether this is a cruel and untrue conspiracy against Moore, orchestrated by the Washington Post, Joe Biden, random ladies who don't like Donald Trump on Facebook, Barack Obama and probably our moms, or if it is the biggest nothingburger ever because God impregnated Mary when she was like 14 anyway, and 14-year-old girls weren't even children in the '70s. But they know for sure it is one of those two things.

Even Moore himself, appearing on Hannity, did not really seem to be able to definitively say that he did not try to get with teenagers in those days. He was, however, clear that if he did, he totally asked their moms if it was OK first.

To me, though--one of the more ridiculous aspects of this is that these people actually seem to think that any of us on the left think that something like child molestation would deter Republicans in Alabama from voting for Roy Moore. HA! We are not so naïve, Breitbart. After Trump, we have absolutely zero reason to believe that this would be something any of you would find unacceptable. That would just be silly.