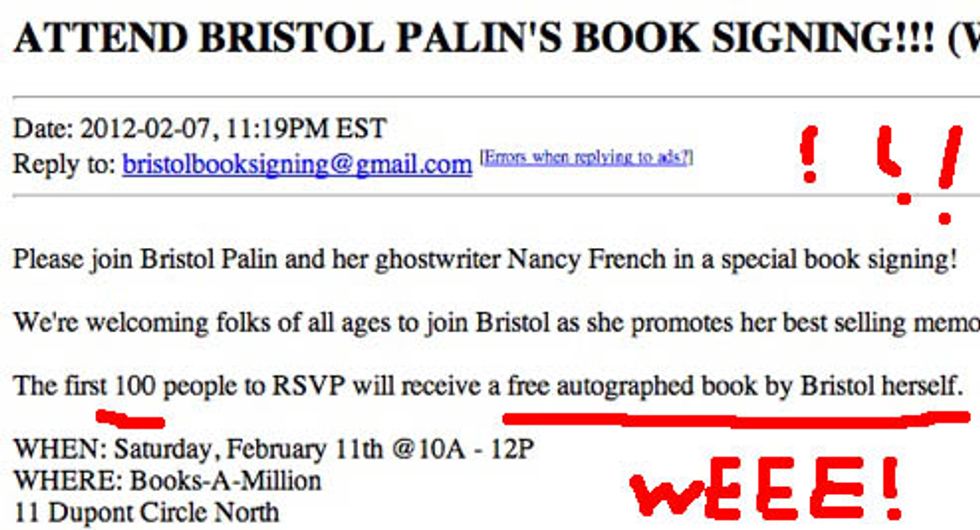 OH LOOK WHO IS IN WASHINGTON, D.C. this weekend, like her mother. CPAC brings out all the best stars! Also like her mother, no one is interested in paying Bristol Palin to yap these days, so she must offer as bribery a free signed copy of her senior year diary to the "first one hundred people to RSVP." Aaaahahahahaha. So does that mean the four people who show up will have to take home 25 signed copies each?

Oh and also look, here is the Important Update on Bristol's life we forgot OOPS to post back in January showing that she, unlike her mother, is toying with the idea of becoming a productive member of society:

In order to support herself Bristol is back to working as a receptionist at a dermatologist's office in Anchorage where she worked before her flirtation with Hollywood.

Bristol also told the magazine that her days as a motivational speaker and TV star are over.

She is now planning on becoming an aesthetician and opening a beauty salon with her sister Willow, 17, who is starting beauty school next year.

So probably the book signing was Sarah Palin's idea, to make a couple bucks for snacks. [Craigslist; Thanks to eagle-eyed Craigslist troll-operative "Scott S."]