Bristol Palin So Glad She Didn't Abort Her Mom's Baby 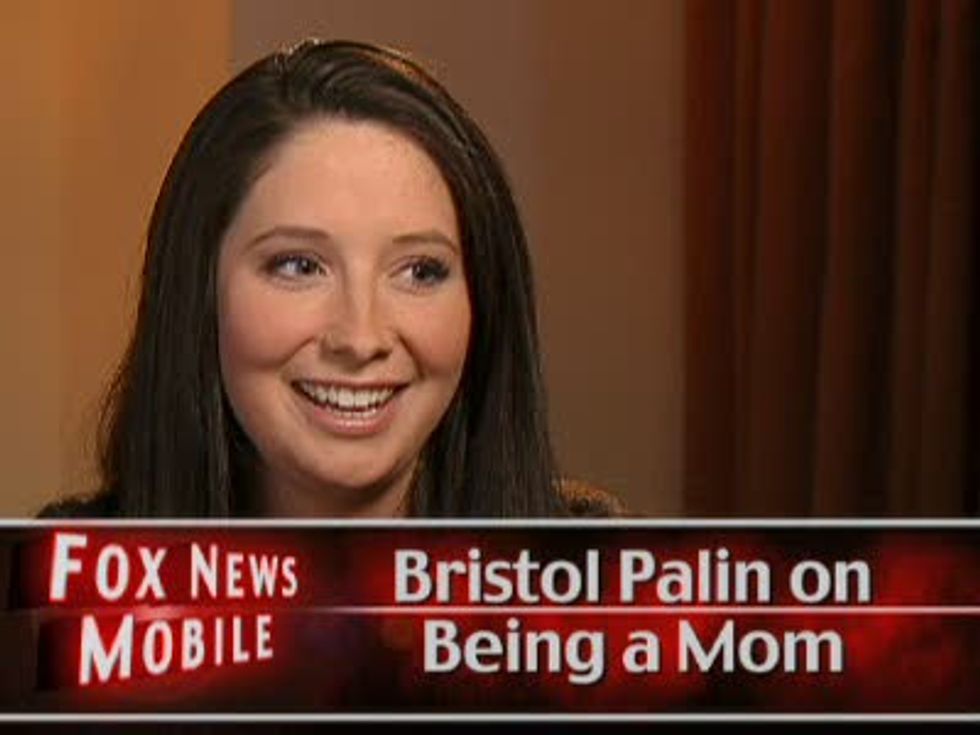 Recall, if you can, a simpler time when Sarah Palin was just some lady governor who turned up in John McCain's five-second Google search for "hot Republican chicks." Before she caused the GOP to collapse on itself and became Half-Term Quitter Grifter Queen Sarah Palin Reality TeeVee Star Also TooTM. Recall as well how brave she told the world she was for "choosing" not to abort her unborned Down syndrome baby, Trig, from the dusty 44-year-old trash compactor that was her womb. Even though she thought about it:

Then when my amniocentesis results came back, showing what they called abnormalities. Oh, dear God, I knew, I had instantly an understanding for that fleeting moment why someone would believe it could seem possible to change those circumstances. Just make it all go away and get some normalcy back in life.

It made her a "pro-life" hero. And then her fail-spawn Bristol also "chose" not to do the thing they believe no one should choose, and she was a "pro-life" hero too! And they were all so happy they'd both chosen not to do abortions to their babies, hooray! And they smiled for the camera and Real America, telling everyone nobody should be allowed to not choose life, even if they are really old or really young or their baby -- inside their mom -- has abnormalities, which sure scared Bristol at the time:

When I found out Mom was pregnant with a baby who would have Down syndrome, I confess.  I was scared.  I didn’t know what it would mean for his life or for ours.

We (the kids in my family) didn’t know Trig was Down Syndrome until after he was a few hours old. Looking back now, I’m glad we didn’t know. We would’ve built up preconceived ideas about what our brother would be like and worried too much about it. Trig is one of our biggest blessing (along with Tripp of course) and really is the light of our lives! Watching him at his 1st grade concert just a couple nights ago melted my heart.

Now Bristol is glad she didn't know the thing she knew two years ago because Trig is a "joy" and a "blessing" and the best thing that ever happened to her! Besides her own parenthetical baby, can't forget whatshisname, he's pretty OK too!

That's why Trig (along with Tripp of course) are her "Favorite Boys", and she loves to blog about how happy they make her. Sorry, other brother Track, but you are not one of her Favorite Boys. Oh, no reason.

Anyhoo-ha boy howdy what the frick. Bristol is glad today, at this particular moment, subject to change depending on whatever political point she's trying to make, that she didn't know about Trig when he was still on the inside -- of her mom -- because then she might have had to read a book or something about what is Down syndrome, and we all know how them Palins don't care for the book-learnin'.

And besides, if Bristol had known about Trig, she might not have chosen life -- for her mom -- and then she wouldn't be able to blog about what a tragedy it is that "more than 90% percent of babies with Down Syndrome won’t ever get the chance to be born," because if she's stuck "choosing life" for babies she doesn't want, every other woman should have to as well. What a blessing.