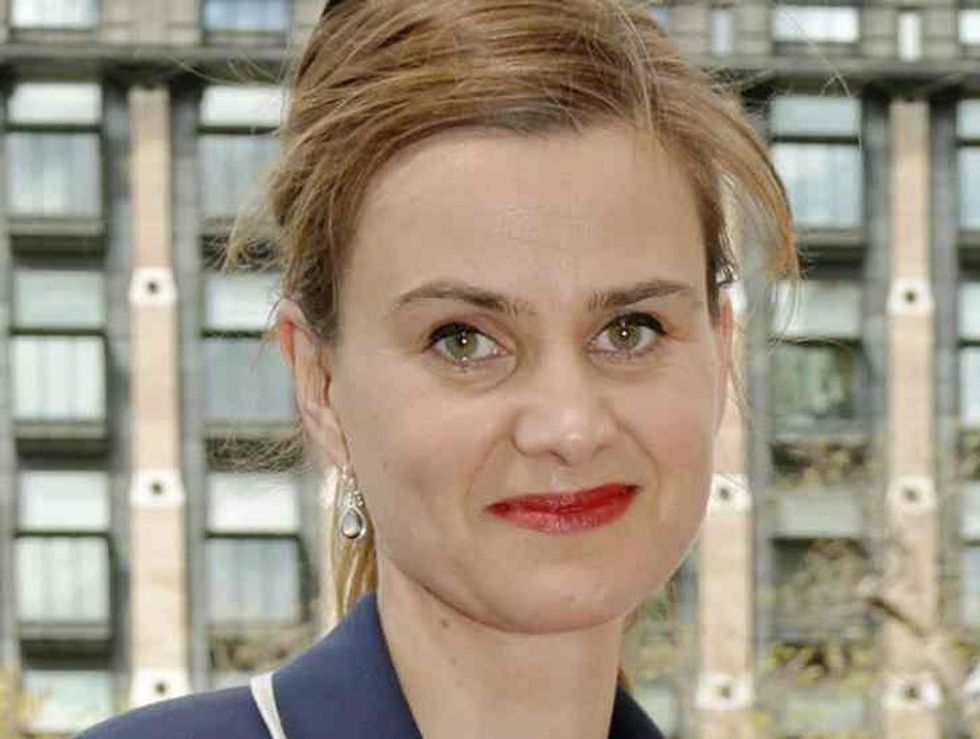 Jo Cox, a Labour Party Member of Parliament, was shot and stabbed Thursday as she left a meeting with constituents in Birstall, West Yorkshire. She died shortly afterward of her injuries. A 52-year-old man has been arrested in the attack; witnesses reported that he shouted the name of a rightwing nationalist party, "Britain First!" as he attacked her. A 77-year-old man was injured as he fought with the gunman.

A witness who spoke to the BBC described the attack:

Cafe owner Clarke Rothwell, who witnessed the attack, said he heard a "loud popping noise that sounded like a balloon burst - a loud balloon".

"When I looked round there's a man stood there in his 50s with a white baseball cap on and a jacket with a gun, an old fashioned looking gun in his hand," he said.

"He shot this lady once and then he shot her again, he fell to the floor, leant over shot her once more in the face area.

"Somebody tried to grab him, wrestling with him and then he wielded a knife, like a hunting knife, just started lunging at her with a knife half a dozen times. People were screaming and running from the area".

Another witness, Hithem Ben Abdallah, said the firearm "looked homemade" to him, and said that the attacker was confronted by a bystander:

There was a guy who was being very brave and another guy with a white baseball cap who he was trying to control and the man in the baseball cap suddenly pulled a gun from his bag".

After a brief scuffle, he said the man stepped back and the MP became involved.

Mr Abdallah said...a man who had been wrestling with the gunman continued even after seeing the gun.

He said: "The man stepped back with the gun and fired it and then he fired a second shot, as he was firing he was looking down at the ground."

"He was kicking her as she was lying on the floor", he said.

The Guardian reports the attack occurred around 1 pm local time, just as Cox was leaving a weekly drop-in session for constituents at a local library; they're also reporting that the shooting occurred after Cox tried to intervene in "an altercation involving two men." Another witness, however, said it appeared the attacker was waiting for Cox:

Terry Flynn-Edwards, who runs the Divine hair studio, opposite the scene of the attack, said a man from the dry cleaners had tried to stop the attack.

She said: “She walked out of the library with her PA and he was waiting for her. He stabbed her first and this guy tried to stop him and then he shot her.”

Campaigning for the June 23 referendum on "Brexit," the question of whether Britain should leave the European Union, has been suspended. The Labour party supports staying in the EU.

Obviously, early reports tend to be inaccurate and we'll eventually get a clearer sense of what actually happened; It's always a good idea to remind ourselves of these News-Consumers' tips from NPR's On the Media:

Britain First is a far-right party that campaigns against immigration, multiculturalism, and what it calls the "Islamisation" of the UK; it's one of the racist groups that has been pushing the myth that some parts of the UK are so chock full o' Muslims that they've become "no-go zones" where police don't dare go -- but where gangs of Britain First jerks feel safe enough to go screaming at Muslim residents on video. They're also fanatical supporters of leaving the EU.

“We were extremely shocked to see these reports and we are keen to confirm them, because of course at the moment it is hearsay,” she said. “This has just been brought to our attention. This is absolutely not the kind of behaviour we would condone.”

So if this was someone who supports them, they'd like you to know he's No True Fascist.

Messages of prayer and support for Ms. Cox came in from other members of Parliament, and her husband, Brendan Cox, posted this photo of her to Twitter a short time ago:

In the meantime, Patriotic American gun-humpers have been sending their own messages of love and support. For guns.

Hurr-hurr-hurr, that gun control doesn't work AT ALL!

As of June 16, 2016, the Gun Violence Archive lists 6,108 gun-related deaths in the Land of the Second Amendment in 2016. In the UK, in 2011, there were a total of 146 deaths resulting from firearms. Then again, one person was shot and killed today, so GUN CONTROL NEVER WORKS.

Today is the beginning of a new chapter in our lives. More difficult, more painful, less joyful, less full of love. I and Jo’s friends and family are going to work every moment of our lives to love and nurture our kids and to fight against the hate that killed Jo.

Jo believed in a better world and she fought for it every day of her life with an energy, and a zest for life that would exhaust most people.

She would have wanted two things above all else to happen now, one that our precious children are bathed in love and two, that we all unite to fight against the hatred that killed her. Hate doesn’t have a creed, race or religion, it is poisionous.

Jo would have no regrets about her life, she lived every day of it to the full.