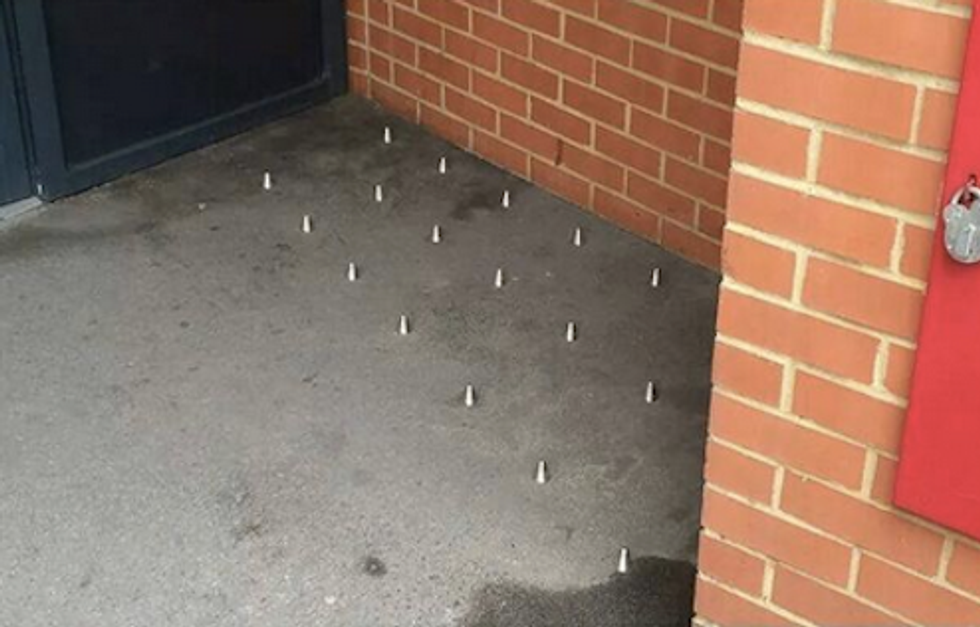 We always assume that the Brits are just more civilized than we are, what with their tea and crumpets and socialized health care, so we're kinda depressed to find out that they can be terrible insensitive fuckfaces about things like homelessness. Witness this block of flats (that's British-talk for apartments, we think) in central London that put big metal spikes in the ground to stop homeless people from sleeping there. Seriously, what the fuck, posh British people.

Metal studs have been installed outside a block of flats in central London to deter rough sleepers. [...]

Residents told the Telegraph that the studs were installed outside the flats in the last month to prevent homeless people from sleeping in the doorway.

Man, leave it to the British to try to make homelessness sound sort of quaint. "Rough sleeping" sounds like you're tossing and turning, not that you've had no choice but to tuck in on a slightly sheltered slab of concrete each night.

You'd think that the apartment block wouldn't have resorted to FUCKING METAL SPIKES IN THE GROUND to deter people unless there had been a massive outbreak of homeless people having the goddamn gall to sleep on the ground near rich people, but haha you would be totally wrong.

A woman who lives in the block told the newspaper: "There was a homeless man asleep there about six weeks ago. Then about two weeks ago all of a sudden studs were put up outside. I presume it is to deter homeless people from sleeping there."

A homeless man. One. Six weeks ago. ONE. SIX WEEKS AGO. Christ, you sensitive Limey bastards. You found the presence of just one goddamn homeless person so troubling that you had to put metal spikes in the ground. METAL SPIKES. Many astute British-flavored people have noted that this is a thing typically reserved to deter pigeons, which pretty much meant that this was like saying homeless people were vermin. Yep.

Sadly, this is not actually a new thing for the country we crushed in the Revolutionary War, as they've apparently been used elsewhere by the Redcoats for over a decade. This is not a nice thing, British people! You are supposed to be a gentle people, particularly since we broke your spirit 200+ years ago. We brutish Americans are the ones that are supposed to come up with ideas like spikes in the ground to prevent people from sleeping there. You're supposed to do things like make twee pop music and call elevators "lifts," which we will never not find adorable.

Get back to what you're good at, Britain, and leave the savage humiliation of the homeless to us. We've got that covered.