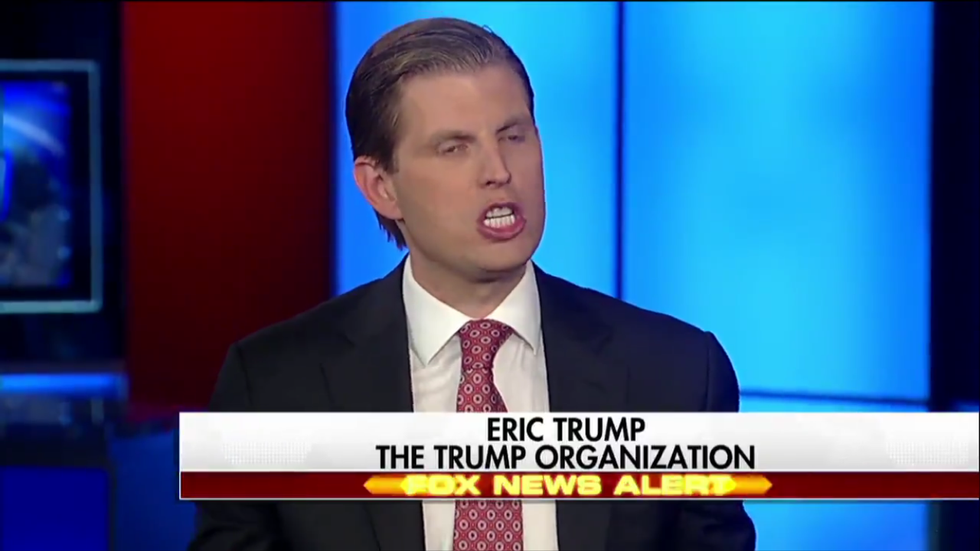 Eric Trump, the not-so-bright youngest son of Donald and Ivana Trump, is having a sad right now. Everybody is asking mean questions about whether his dad steals money from kids with cancer, and Democrats are just in general being unkind to his big daddy who DOES TOO have normal-sized hands and IS NOT A PUSSY LIKE EVERYBODY SAYS. So Li'l Eric went to visit Sean Hannity on the Fox News, so he could cuddle inside Hannity's warm bosom, a bosom that HAS SOME RESPECT for his dad.

While there, he said the following about Democrats:

.@EricTrump: "You see the Democratic Party, they are imploding...they have no message." #Hannity pic.twitter.com/RmUPvFI1tM

I’ve never seen hatred like this. To me, they’re not even people. It is so, so sad. I mean, morality is just gone. Morals have flown out the window. We deserve so much better than this as a country. It's so sad -- you see the Democratic Party and they are imploding. They’re imploding, they have no message. You see the head of the DNC who is a total whack-job. There’s no leadership there. And so what do they do? They become obstructionists because they have no message of their own. They have no solid candidates of their own. They lost the election that they should have won because they spent seven times the amount of money that [SOB!] my father spent. They have no message, so what do they try and do? They try and obstruct a great man, they try and obstruct his family, they come after us viciously, and it's truly truly horrible!

Jesus Christ, somebody needs a diaper changed or something, and this time we're not talking about Eric's dad.

We are curious, however, about Eric's notion that Democrats are not people, because is Eric Trump an expert in who is and is not a "people"? Let's investigate.

Is this a people?

Is this a people?

What about this one?

Hmmmmmm, it is very hard to tell.

Maybe this is a people, but we're not going to go out on a limb or anything.

Maybe we need to ask this a different way. Is THIS a people?

Don't think so. What about this one?

No that thing is orange, and people are not supposed to be that orange.

We may never figure out who is and is not a people at this rate.

Well this little exercise has been inconclusive.

This has been a post about Eric Trump saying that Democrats are not people.

Wonkette is fully funded by PEOPLE like you. If you love us, click below, to fund us!