Brussels Terror Attacks: Known Knowns, Known Unknowns, And Some Of The Asshats 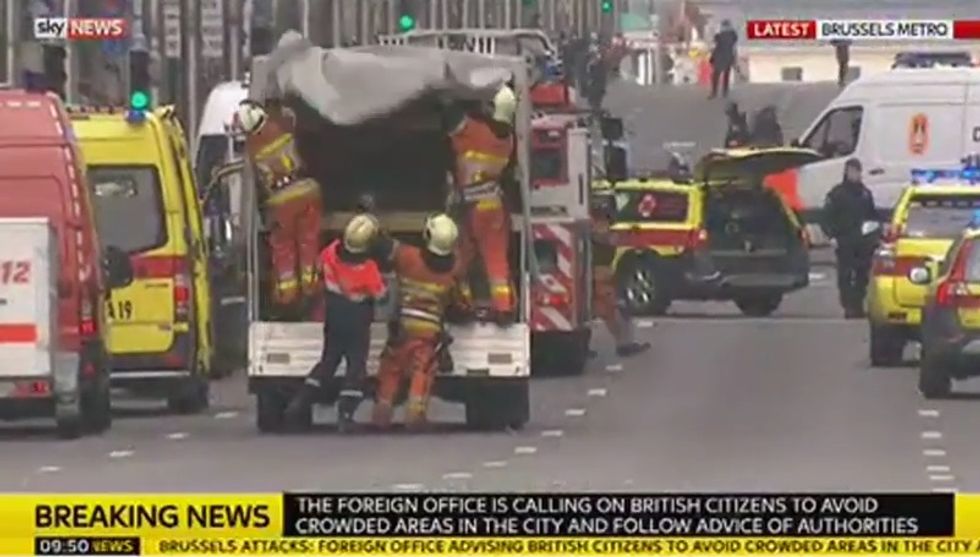 Here we are again in the aftermath ofanother horrible massacre, this time in Belgium. We're still in the "early reports indicate" phase, so be ready for the things that we know for sure to change quickly. Not that the uncertainty about some details is any reason to delay the "let's make political hay of this" and "let's connect this to our favorite political hobbyhorse" phases of reaction, which as usual got underway as soon as the news broke. The "oh dear god what is WRONG with people?" phase will continue unabated.

What We Know For Sure

Terrorists set off two explosions in main hall of Zaventem Airport in Brussels at about 8 a.m. local time. At least one of the blasts was a suicide bomb, killing 11 and injuring at least 80. A third bomb was found and safely detonated by a bomb squad.

A second bombing came about an hour later at the Maelbeek subway station in central Brussels; at least 20 people were killed and 106 injured. The Maelbeek station is close to the several European Union buildings. Subway officials said that the blast occurred inside a train car.

Brussels has largely shut down since the attack. All flights have been canceled at the airport and the Brussels Metro system has been stopped; international passenger trains to Brussels were also cancelled. European Union buildings are on lockdown, and only accessible to employees with badges.

Is This Related To The Arrest Of The Paris Terror Suspect?

We don't know yet:

The seemingly coordinated explosions came days after Belgian officials warned of possible attacks following the arrest in a Brussels shootout on Friday of Salah Abdeslam, the only known survivor of the 10 Islamist attackers who killed 130 people in a string of suicide bombings and shootings in Paris in November.

What Don't We Know?

NPR's On the Media put together this helpful "breaking news consumer's handbook" for coverage of terrorist attacks. The main thing to remember is that early reports are likely to be wrong, and healthy skepticism is always a good idea. We especially like the cautions about the emotionalism of coverage and the scare-words. Happily, we have plenty of politicians and news anchors to take care of the mindless speculation and emotionalism.

Already on Tuesday, Matt Lauer asked Hillary Clinton if she thought it would have been a good idea to torture Salah Abdeslam after his arrest last week (remember, we don't yet know whether this attack was related to Abdeslam). To her credit, she answered, "Our country’s most experienced and bravest military leaders will tell you that torture is not effective." For what it's worth, Reuters reports Abdeslam was already cooperating with police interrogators -- but torture would include a nice frisson of revenge, so obviously we should go with that.

So, what's unknown at this point? Pretty much everything:

ISIS has claimed responsibility for the attack, which seems credible -- but again, early reports can be iffy.

Why Is This Barack Obama's Fault?

As we noted earlier, the Brussels attack occurred, or was made worse somehow, because President Obama was in Cuba, according to former Bush speechwriter Marc Thiessen:

What exactly does it say all of? That the bombings wouldn't have happened if Barack Obama had stayed home? That ISIS is emboldened by the reestablishment of diplomatic relations with Cuba? That Barack Obama knew the attack was coming and didn't change his travel plans? Shame on him! A few other thoughts from the Tweetoverse:

We're waiting on the official Fact Check on that photo, but we're reasonably certain that Obama was not having a celebratory mojito after the news broke at 3 a.m. Eastern. Just a guess there. While we're at it, Yr Wonkette should confess that we had a couple of beers Monday night, just hours before the attacks, without the least regard to the feelings of those who would die shortly after.

How About We Blame Refugees Some More?

Donald Trump already did; Ted Cruz issued a statement saying we "need to immediately halt the flow of refugees from countries with a significant al Qaida or ISIS presence" -- refugees, not being actual people, "flow" like some sort of toxic spill, of course. (Shall we remind you that refugees coming to the USA face more extensive screening than any other category of entrant into the country? Yes, let's!)

In reply, we're happy to re-post an observation on the same topic by sane English human being Dan Holloway, following the Paris attacks. It's every bit as true now as it was a few months ago:

Not everyone agreed with her, happily:

Who Isn't Being A Jerk About This?

She (or her campaign; there's no "H" on this one) followed that up with a tweet emphasizing the need to keep calm, carry on, and know where your towel is:

And the people of Brussels have turned out in a square outside the Bourse, the city's stock exchange, to leave messages of sympathy and support in chalk on the streets:

We expect one of the Republican candidates to condemn that last anonymous message for not specifying "Fuck Radical Islamic Terror," since merely condemning terror is weak. How did Barack Obama even make it from Havana to Brussels so fast?