Bundy Buddies Added Dicks To Indian Petroglyphs. Not A Dick Joke Wonkette Can Get Behind 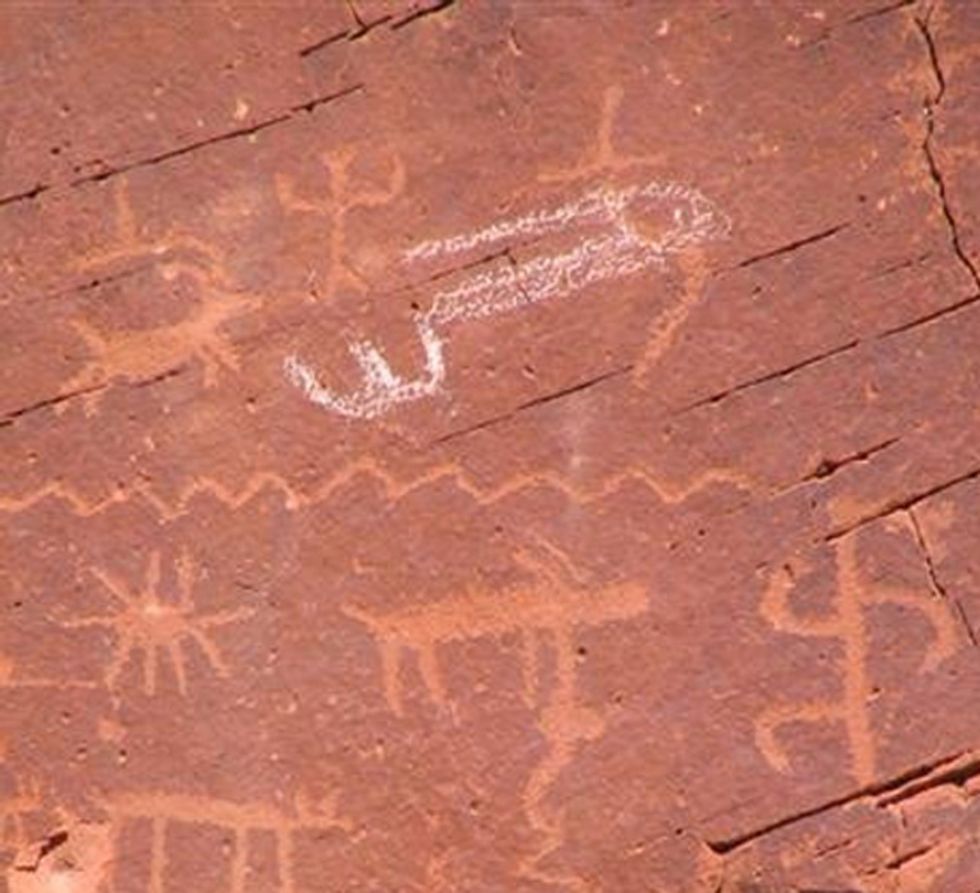 As everyone knows, the Bunditarian Patriot Militia Jamborees of 2014 and 2016 were all about an important principle, namely, the "return" of federal land to "We The People," because the feds are all about stealing The People's land and doing tyranny to it, like having wildlife refuges and National Monuments and other stuff what gets in the way of grazing cattle for free. As we found out after the High Plains Grifters were all cleared out of Malheur National Wildlife Refuge in Oregon, what The People really want to do with federal land is dig poop trenches into Native American archaeological sites, for Liberty.

Now that the John Brown of welfare ranching is a-moulderin' in a jail cell awaiting trial, let's look in at what's happened to Gold Butte, the sensitive 350,000 acres of desert area near the Bundy ranch, since the unpleasantness of 2014. Sadly, the Bureau of Land Management, understandably leery of getting shot at, has pretty much stayed away from the area since the end of the standoff. That may be changing, as environmental groups and local Native Americans have been calling for increased federal protection of Gold Butte. Saturday, the day after Earth Day, members of the Moapa Band of Paiutes and other tribes staged a "culture walk" across 11 miles of Gold Butte to call attention to vandalism of cultural sites, illegal offroading, and ranchers letting cattle onto land where grazing isn't allowed. You know -- what the Bundyite crowd calls "responsible local control of the land."

Since the Bundy standoff, ancient petroglyphs in the area have been defaced, as seen in the charming example above. When in doubt, shoot holes and draw dicks, for Freedom! Other petroglyph sites have been shot up by gunfire or chipped off and removed altogether. William Anderson, the former tribal chairman of the Moapa Band of Paiutes, said, "I couldn’t believe someone would do that ... It was surprising that people had no respect for our culture and our people." Anderson recently traveled to Washington DC to lobby for protection of Gold Butte, which is currently designated an "Area of Critical Environmental Concern"; many would prefer even stronger protection.

Because of trouble caused by the Bundys and their pals, the federal employees tasked with safely guarding these antiquities were prevented from doing their jobs. These employees have been under constant physical and mental threat for doing what the American people have tasked them to do.

I’ve tried to protect Gold Butte for a long time. And the reason we haven’t been able to do anything to this point is that the Bundy boys and his pals. So that’s why I’m grateful for the Antiquities Act. Because of this legislation and because of the fact that the Bundys are in jail, I’m going to reach out to the White House. And there’s no guarantee we’ll get it done. We’ll see if President Obama will protect this area. He has the authority, as any president does, to stop this sort of destruction and stop it now.

So how has Gold Butte fared since 2014, when the Bundys and their patriot pals freed the area from the tyranny of the BLM? In short, not so great, as an August 2015 report by the group Friends of Gold Butte documented. Besides the vandalism to the petroglyphs, there's also a lot of illegal offroading; people cut fences and tear up the desert just exactly the way Thomas Jefferson intended.

Fuck the threatened Mohave Desert tortoise if it gets in the way of having fun. There are designated trails for off-road vehicles, but what's the fun of staying on those? Tearing up some sensitive habitat is a great way of telling the feds you're not gonna take their oppression anymore. Heck, back in 2014, a bunch of yahoos joined Ammon Bundy for an illegal ATV convoy through a restricted Utah wilderness area, and of course, one of the geniuses knew exactly what THAT act of defiance was like:

One man said: “Rosa Parks didn’t have a case until she sat in the front of the bus.” Another added: “The BLM has guns and mace and Tasers and shackles, but we’ve got guns too!”

Since the Bundy standoff, Gold Butte has been a veritable Montgomery Bus Boycott of freedom fighters cutting fences, swerving around barriers, ripping down "closed to motor vehicles" signs, and driving across fragile desert terrain, as the Friends of Gold Butte report documents. The online version of the report has the specific locations redacted so more motorized idiots don't go tearing up the place and creating new illegal trails.

The report also documented an attempt at building an illegal, improvised cattle-watering station: Someone trucked a huge metal tank into the desert and dug a trench for pipes to hook it up to a half-assed cattle trough made out of a heavy equipment tire set in concrete:

It didn't work so well -- while the tank had water in it, the tire didn't hold water so well. But it worked great at trapping at least one unlucky roadrunner and some unfortunate furry thing that got caught on the float valve wire:

Someone else thought it would be fun to chop down a Joshua tree:

And then there's always the need for target practice:

And through it all, the unfed feral Bundy cattle roamed, because ain't no federal government going to tell a free man he can't let his cows wander until they starve.

Now, apart from the starving cattle, there's nothing that absolutely connects the Bundy family to any of this, except of course that they're the ones who proudly stood their ground against the BLM, which hasn't been present to protect the area. The BLM told employees and contractors to stay out of the area since June of 2015, when shots were fired near a survey crew. Gotta love that Second Amendment keeping We The People safe from government overreach.

Gayle Marrs-Smith, the Southern Nevada BLM field manager, told a committee of the Nevada legislature in February that the "timeline remains fluid" for the return of BLM staff to the area now that Cliven Bundy has been arrested; there are still plenty of loons with guns in the area, and we can't say we blame her for being cautious. At a public meeting in March 2015, Marrs-Smith was personally threatened by Randy Bundy (now in jail in Oregon following the Malheur takeover), who insisted that the BLM had no right to block roads or trails in the Gold Butte area, and told Marrs-Smith, "Take note of that. We have enjoyed a year of freedom since you have been gone. We want you to stay gone. Do not come back."

[wonkbar]a href="http://wonkette.com/597530/bundy-family-sovereign-citizen-loons-have-special-constitution-that-says-they-can-steal-all-our-sht"[/wonkbar]Needless to say, Nevada Republicans are fighting to keep the federal government from protecting federal lands. In 2015, colossal idiot Michele Fiore tried (and spectacularly failed) to pass a state law transferring all federal land in Nevada to state control. (Fiore agrees with the Bundy's sovereign-citizen interpretation of the Constitution, in which the national government is barred from owning any property other than for military bases and the District of Columbia.) And shortly after the 2014 standoff, Nevada congresslackwit Dean Heller "warned" President Obama not to declare a national monument at Gold Butte, claiming it would create one of those government overreach crises that are very, very bad:

Heller did not mention Bundy by name, but he told the president any move to assert more federal authority “would not serve the area well.” He said it would escalate anger and frustration “in a region of our state where tensions are already presently high.”

We say, fuck 'em. The bastards are in jail and the land needs to be protected. Barry's been enjoying working through his "fuck it" list for a year now, so how about a nice new national monument to go with that one just outside the Grand Canyon?