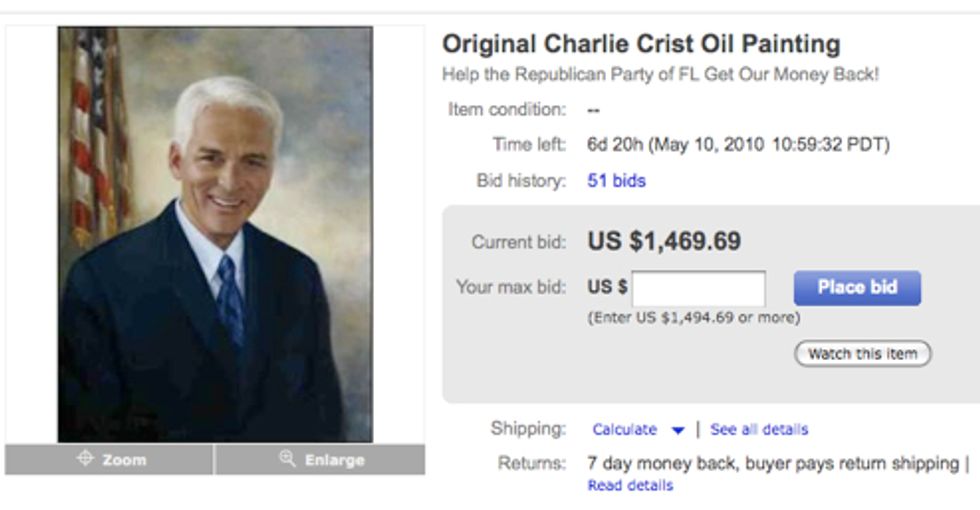 This is real, you guys! The Florida Republican Party, as part of its ongoing efforts to scrub any hint of association with pariah Charlie Crist -- most of which just involves wiping all of those orange smears from the walls of their headquarters -- is selling Crist's official state portraiton eBay. It cost the party $7,500 when commissioned (which seems like a pretty big ripoff, considering that the artist thought Crist was Mexican), and they want to recoup some cash. Your Wonkette has been needing to grow its office collection of fine oil portraits, which is a little too dominated by original 19th century Romantics and plump Renaissance nudes at the moment, so we'll be keeping an eye on the bidding.

Uh oh, we have a wacky description, folks:

★Canvas is naturally sensitive to changes of temperature and humidity, just as the Charlie Crist’s political convictions are subject to fluctuations in poll numbers.

★Ornate gold frame made of manufactured wood, similar to the fabricated conservative values of the politician depicted within.

Since Crist is a Mexican in the painting, why aren't they keeping it for Marco Rubio? Just change the hair color to blue or whatever it is. (We don't really know what Marco Rubio looks like.)