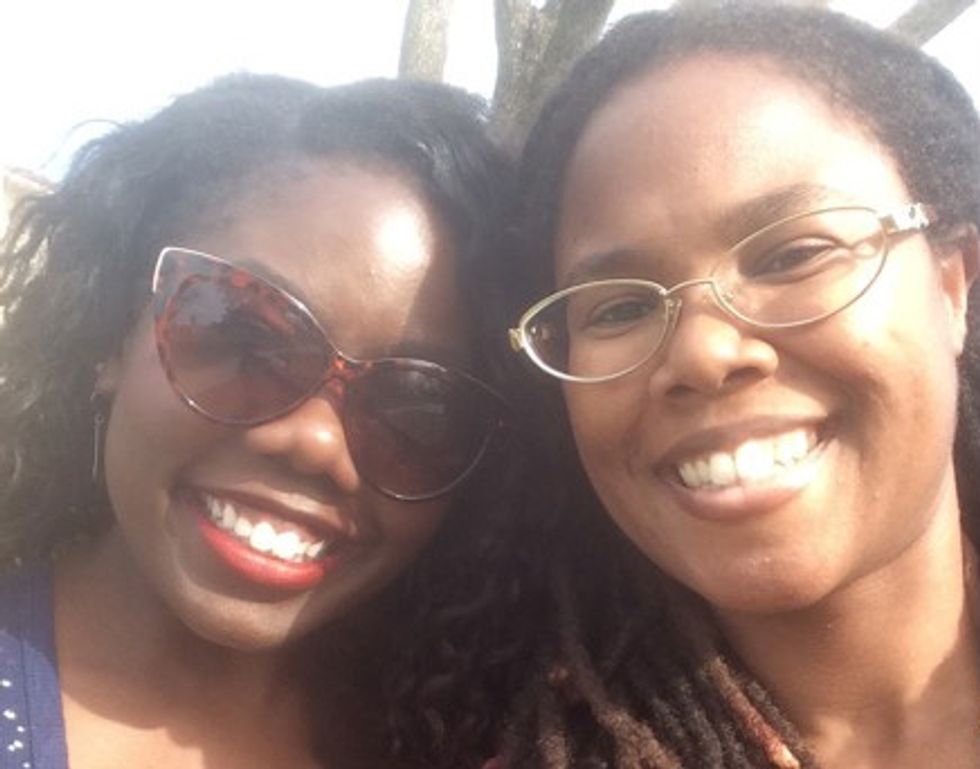 In Kurt Vonnegut's Slaughterhouse-Five, there's a lovely Kilgore Trout story-within-a-story called "The Gospel From Outer Space." An alien came to Earth, studied Christianity very carefully, and concluded that the true message of the Gospels was "Before you kill somebody, make absolutely sure he isn’t well connected." Which brings us to this story of two attorneys from the ACLU who say they went into a bar and found themselves on the end of some not-at-all subtle racial discrimination.

Abre' Conner and Novella Coleman went to a Fresno bar called "The Brig" for a night of fun and karaoke. While waiting patiently for their song to be called, things went south. Old South, even:

[A] bar employee came up and said we had to buy drinks to sing karaoke. Another bartender lunged at us within inches of our faces and shouted “Buy drinks!”

Our group of three had already bought two drinks. But it quickly became clear to us that we were unwelcome in the bar.

A second bartender -- a very tall and large man -- shouted louder and louder that we were loitering and that the bar wasn’t a hangout place. Over and over again he pushed his body up against Abre’ -- who is just 5’4” tall -- to force her out of the bar.

The police were called, and an off-duty server tried to smooth things over; the women complained their names had been taken off the karaoke list before anyone told them of the "buy drinks rule," and that several others in the karaoke line were not holding drinks. Then the women had to go and get uppity, pointing out they were the only black people in the bar.

But the server yelled back, “It’s not fair for you to bring up race!”

When the police arrived, several customers explained to the officers that the bar staff were enforcing the rule against us only. Some told the police that a one drink rule did not exist. Others even tried to buy us drinks. But the bartenders wouldn’t let them.

And still, the police forced us -- two Black women in the bar -- to leave.

Moral of the story: Before you discriminate against two black ladies, make sure they're not ACLU lawyers. Because now the ACLU has filed a request with the California Department of Fair Employment and Housing (DFEH) asking it to investigate what happened to Conner and Coleman, and just what the hell is going on at this bar anyway?

The police weren't a lot of help -- a video shows them helpfully informing the two attorneys the bar reserves the right to refuse service to anyone, which isn't actually legal cover for discrimination. Eventually, the cop explains the most he can do is document the case and if they'd like, they can sue the bar.

Nice moment: the women reply, "I know. I'm an attorney. I know that," and "Me too. We're both attorneys." The cop's partner suggests they contact the Better Business Bureau, and one of the women replies, "Or we can do it ourselves. I work for the ACLU." Damn troublemakers.

The ACLU's press release on the case explains,

Since 1964, federal law has clearly prohibited businesses open to the public from discriminating on the basis of race. California’s anti-discrimination laws -- in this case, the Unruh Civil Rights Act of 1959 -- are even stronger. Businesses in California cannot refuse service or entry on the basis of race, sex, religion, disability, and other protected categories. The DFEH can bring lawsuits against businesses for violating the Unruh Act on behalf of people who have been illegally discriminated against.

The site also has advice for what people should do when they believe a business has discriminated against them -- which might be useful to a group of Muslim diners who say they were tossed out of a popular café in Laguna Beach because they were a bit too obviously Muslim In Public.

(You've already thought to yourself, "Racism in Fresno, sure, it's like the West Memphis of California. But upscale, affluent, hippy-dippy-groovy Laguna Beach?" Yes, there too!)

On Facebook, Sara Farsakh accused the management of the organic artisanal free-range and fair-trade Urth Caffé of treating her and some friends unfairly because among them were women wearing hijab. Ms. Farsakh said after they'd finished dinner, a few members of their group ordered dessert and coffee, only to be told shortly afterward they'd have to leave, because they were in violation of the restaurant's posted policy that when the restaurant was busy, "anyone that had been there for over 45 minutes was required to share or give up their table to other customers."

Problem was, said Farsakh, at least a third of the tables were empty. The restaurant employee, Tino, told them they had to get out within 10 minutes, even though their food and coffee had just been served:

We asked Tino if he had asked any other parties to hurry up and leave. He replied that he was instructing anyone that had been there for over 45 minutes. The party on the table next to us (a group of white women) overheard our conversation and were shocked. They told us they had been sitting far longer than we had but had never been told to prepare to leave.

Another staff member helpfully gave them the old "management reserves the right to refuse service" line:

[When] I asked why we were told to leave when we weren't breaking any policy, she simply said we can ask anyone to leave, and if you don't want to come back that's completely fine.

Police were called, and once again, cops told the customers it's the owner's right to refuse service. Maybe California cops need some updated training on the Unruh Civil Rights Act?

The cafe's owner, Shallom Berkman, reiterated the 45-minute rule to TV station KABC, saying everyone wants an outside table and there was a line that evening. And definitely no discrimination, because that's UNPOSSIBLE:

Berkman stated the women were not asked to leave because they are Muslim.

"My wife is Muslim and I'm Jewish. We like to say we're a sign of world peace," Berkman said.

He said he was sorry for the misunderstanding and offered Farsakh and her friends a free meal. Farsakh and the others instead have taken the incident to the Council for American-Islamic Relations (CAIR), and are considering a lawsuit.

A third version of the story surfaced at another Facebook page, "Bitchy Waiter," which posted this anonymous account by "someone who works at the restaurant":

To be clear; they had been there for 4 hours. We gave them a 10 minute warning to either order more food or share their table with guests who needed it. They were a party of 12, however only 4 of them ordered meals. They yelled at us, made a scene called us racist, so we asked them again to leave, they didn't. We called the police only after our security stepped in and they refused to leave, the whole ordeal of getting them to leave took an additional hour. They are now attacking us on Facebook and Yelp. I answer the phones to people calling me racist which is absurd. I was not even involved in the incident. I think our side of the story should go viral. Our seating policy is clearly posted as well as mentioned to you as your being sat. We gave them more time then we usually do, however they had more girls join them later on in the evening. Our owner is Muslim! She knew of the entire event and agreed that after they started yelling we needed to get the police involved! This is not how we should be treated."

This differs widely from Farsakh's and Berkman's accounts. Farsakh says they arrived at 7:15 and were hustled out precisely at 8:00, and Berkman says nothing about the group having been there "four hours," or that only four people in a party of 12 ordered meals. The anonymous writer, while wanting "our side" to go viral, also says s/he wasn't involved in the incident at all. Sounds like bullshit to us. (Facebook commenters said the women had to be "campers," because they see Muslim women do this all the time.) This version of the story was picked up by an anti-Islamic blog, which claims it's the restaurant's response. You know how those Muslims lie to portray themselves as victims. Urth Caffé "categorically denies any and all claims of racial or religious discrimination" on its Facebook page.

It's a regular Laguna Beach Rashomon, is what it is. If nothing else, we can recommend a couple of good ACLU attorneys to Ms. Farsakh.