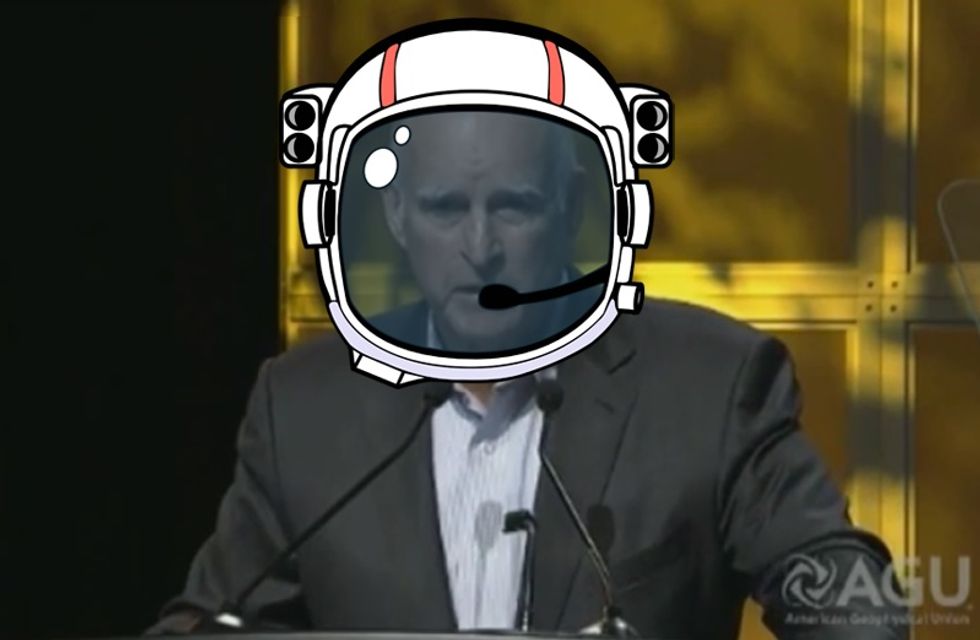 We generally like the cut of California Gov. Jerry Brown's jib, even if he was a bit silly about legalized weed leading to too many stoners to keep the state competitive. Dude has a corgi named Sutter after all, and he knows global warming is really real, and that's plenty. And now he's given us one more reason to like him: At a meeting with scientists Wednesday, Brown pledged he'd resist any attempt by the Trump administration to get in the way of California's efforts to fight climate change.

“We’ve got the scientists, we’ve got the lawyers and we’re ready to fight. We’re ready to defend,” he said to boisterous applause at the American Geophysical Union conference in San Francisco [...]

“Keep it up,” Brown implored the gathering. “Don’t flag. We’ve got a lot of work to do.”

Brown said during his first round as governor in the 1970s, he'd gotten the nickname "Governor Moonbeam" because he'd proposed California launch its own communications satellite and because he had a retired astronaut on the state payroll as a space advisor. “I didn’t get that moniker for nothing,” Brown said. The more you know!

Brown isn't about to take the possibility of the Trump administration shifting national science spending away from climate science, a very real possibility given Trump's filling his cabinet with oil company executives and outright climate change deniers:

“And, if Trump turns off the satellites, California will launch its own damn satellite,” he added. “We’re going to collect that data.”

He said if the federal government “starts messing with” the state’s renowned science facilities, such as Lawrence Livermore National Laboratory, “I am the president of the Board of Regents. I am going to say, ‘Keep your hands off. That laboratory is going to pursue good science.’ ”

Was he done yet? Aw, hell no, as the hats say. Brown also had some choice words for Rick Perry, Trump's designee for Secretary of Energy, as well as that backwards carbon-friendly state he was governor of:

“Rick, I got some news for you,” Brown said. “California is growing a hell of a lot faster than Texas. And we’ve got more sun than you have oil.”

Brown threw so much shade in so many directions that solar panels in the immediate area experienced a brief decrease in output. He said the challenge of dealing with climate change went well beyond individual politicians; rather, he said, "Big Oil" and "big financial structures that are at odds with the survivability of our world" are institutional threats that scientists will need to join with environmental groups and lawyers to fight. Brown urged the scientists, whom he called "truth seekers," to fight against the “post-fact” or “anti-fact world,” where powerful institutions would rather obfuscate and cast doubt on the findings of climate science. He singled out the "clowns" at Breitbart for mocking California's efforts to reduce methane emissions from agriculture and landfill as merely regulating "cow farts," although frankly, we think Gov. Brown may be missing an opportunity to enlist the inherent hilarity of cow farts in the fight against greenhouse gases.

And while Brown isn't encouraging any of that California secession nonsense, he did promise to use California's economic power as a counterweight to possible Trump administration efforts to abandon progress on climate:

“A lot of people say, ‘What the hell are you doing, Brown? You’re not a country,’ ” the governor said, to laughter.

“Well, judged by measures of gross domestic product of over $2.2 trillion, we’re the fifth or sixth economy in the world. And we’ve got a lot of firepower ... And we will persevere. Have no doubt about that.”

“We will set the stage. We’ll set the example,” Brown added. “And whatever Washington thinks they are doing, California is the future.”

Consider the example set, and as always, your Wonkette gets a cut!