Cambridge Analytica DID NOT Use Ukrainian Prostitutes As Honeyp ... Oh, You Mean THEM? 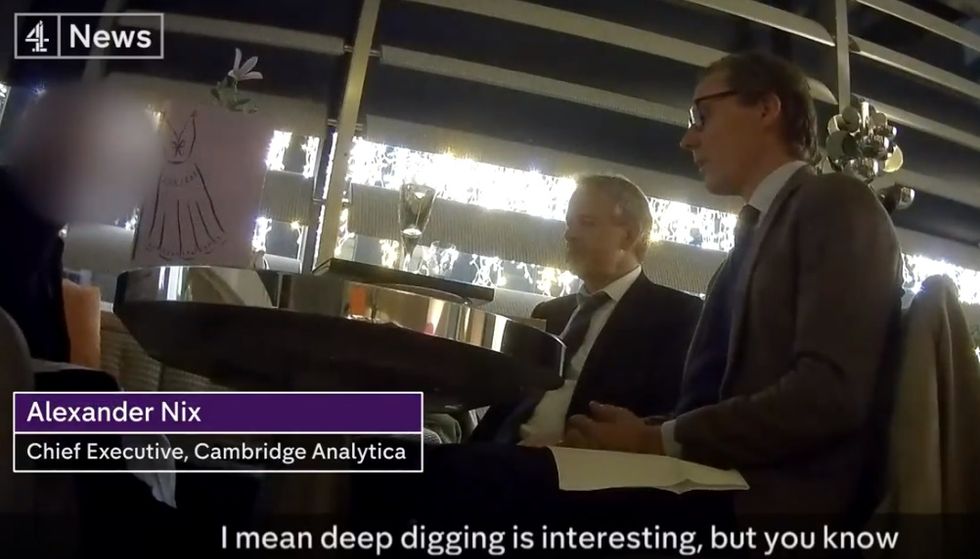 Not pictured: James O'Keefe, because this is real journalism!

Did you hear the one about how the shit is finally hitting the fan for Cambridge Analytica, the skeevy weird data company Donald Trump's campaign used to help him steal the election? Of course you did, we just wrote about it! Ah, Cambridge Analytica, the weird company Steve Bannon was on the board of, the one whose US address was the same as the address for Breitbart and all of Steve Bannon's other fucked up loser ventures!

Channel 4 in Merry Olde Englande is releasing a series of mini-documentaries on Cambridge Analytica's work, because apparently the Deep State had a meeting and decided this week was LET'S FUCK UP CAMBRIDGE ANALYTICA WEEK. The first segment focused on CA whistleblower Christopher Wylie, who is speaking out about the "frankenmonster" he created for CA, the tool that was used to harvest millions of Americans' Facebook data, so that the Trump campaign could in turn micro-target those people with lies, damned lies, and #TrumpFacts, possibly with Russia's help.

Part two, which has just aired in the UK, is about another side of CA's "data" operation, one that doesn't seem to be about data at all! In secretly recorded conversations with people like Cambridge Analytica CEO Alexander Nix, we learn about how CA helps candidates around the world, like by bribing their opponents and sending them hookers.

Channel 4 went undercover as Fake Sri Lankans, pretending to want to hire CA for Fake Sri Lanka Elections. And in so doing, they heard SOME STUFF.

In essence, Channel 4 totally James O'Keefe-d Cambridge Analytica, but correctly, without doing the part O'Keefe does where he just cold makes up shit and every single one of his exclusive reports is giggled off the internet about 11 seconds after it's released. The first CA people they met with were a couple of CA bigwigs named Alex Tayler and Mark Turnbull, and it wasn't too hard to get them to spill! Asked about the data mining stuff, Turnbull emphasized that CA isn't looking to insert true information into a debate, but rather to play off people's fears and emotions, which in the case of the Trump campaign, means "racism":

... [W]e just put information into the bloodstream of the internet, and then, and then watch it grow, give it a little push every now and again … like a remote control. It has to happen without anyone thinking, "that’s propaganda," because the moment you think "That’s propaganda," the next question is, "Who’s put that out?"

After that the Fake Sri Lankans asked, "And can you help us get dirt on Hillary Clinton, we mean Sammy From Sri Lanka?" YOU BET THEY CAN! Cambridge Analytica has "people" for that. They are ex-spies.

Cambridge Analytica has no problem with "wad[ing] into a foreign election," because they know they can "disappear without a trace" afterward, as Channel 4's reporter put it. And what of laws about foreign interference in elections, or if you just don't want people to know Cambridge Analytica did your dirty work? There's a fucked up workaround for that, of course. Here's Turnbull:

Turnbull also said his company doesn't do "fake news" or "lying" or "making stuff up," to which we reply that you motherfuckers had STEVE FUCKING BANNON ON YOUR BOARD, SO SUCK OUR DICKS FOR A GOOD SOLID TEN MINUTES. He also says they don't do "entrapment," mm hmm yup sure.

I mean, deep digging is interesting, you know, but equally effective can be just to go and speak to the incumbents and to offer them a deal that's too good to be true ...

... these sorts of tactics are very effective, instantly having video evidence of corruption ...

A little later, Nix talked about other ways to entrap people:

Send some girls around to the candidate's house [...] just saying we could bring some Ukrainians in on holiday with us, you know [...] They are very beautiful, I find that works pretty well!

And what about fake news and stuff, Alexander Nix?

I mean, it sounds a dreadful thing to say ...

... but these are things that don't necessarily need to be true, as long as they're believed.

Gotcha. Apparently Nix feels that way when he talks to congressional committees too.

In response to this obvious fake news report, Cambridge Analytica said that despite how they got caught on tape admitting to using bribes, honey-traps and entrapment, they do not EVER use bribes or honey-traps or entrapment. Moreover, they said they only talk about those things to find out if their prospective clients are gross and bad people who want to do gross and bad things. No, honest, they fucking said that:

We entirely refute any allegation that Cambridge Analytica or any of its affiliates use entrapment, bribes, or so-called “honey-traps” for any purpose whatsoever … We routinely undertake conversations with prospective clients to try to tease out any unethical or illegal intentions ...

AND NO FAKE NEWS.

Kids, Channel 4 is not done. The next installment of this report comes out tomorrow, and it is specifically about Cambridge Analytica's actions in America. OH BOY!

Did you miss Part 1 of the series? Of course you did! Here it is:

Nice people Donald Trump and Steve Bannon hang out with. Maybe when Kamala Harris is president we can put them wherever you put people you LOCK UP.

Laugh and chortle and be merry, our global nightmare is almost over, and it is your OPEN THREAD.