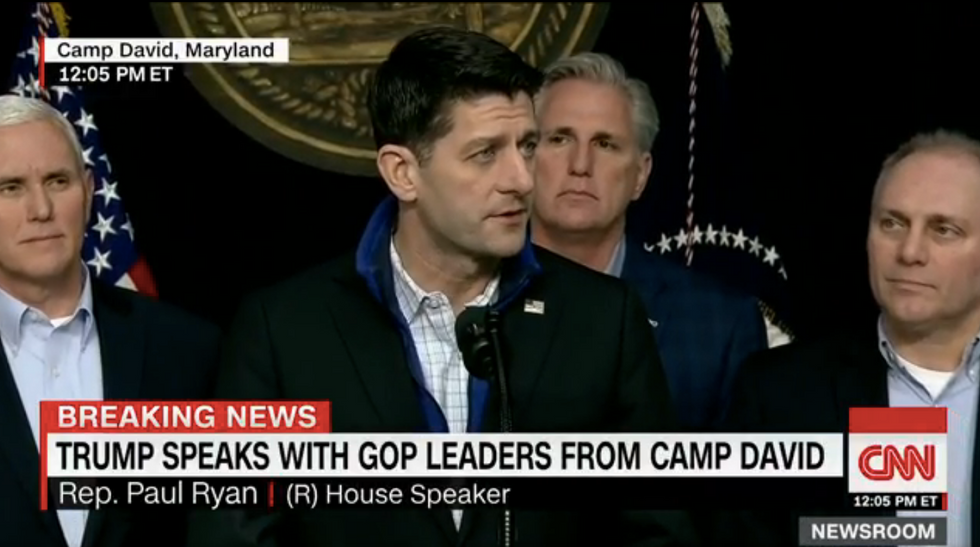 After a heavy morning of tweeting about how he is a very stable genius, Donald Trump held a press conference at Camp David to talk about his legislative agenda.

During this conference, Trump reiterated his vow that he would deport all the DREAMers and end DACA if no one gave him his big, beautiful wall. You know, the one that Mexico was supposed to pay for? Well, no, we are paying for it, it's going to cost us $18 billion over ten years, and if we refuse, he will just start sending people away to countries they have possibly not even been to since they were children.

Trump reiterated his price for ensuring that young immigrants can stay in the U.S. legally: a wall along the U.S.-Mexico border, an end to the “diversity visa” lottery program, and changes to laws allowing citizens to sponsor some relatives for green cards. Provisions dealing with those issues should be lumped in the same legislation, Trump said Saturday at Camp David.

He issued a directive killing the Obama-era Deferred Action for Childhood Arrivals program starting March 5, although many DACA recipients have already lost their protections.

“We all want DACA to happen,” Trump said, referring to the top congressional Republicans who accompanied him. “But we also want great security for our country. So important.”

So yes, he doesn't want to have to do a horrible thing, but he's going to have to if you won't let him have his toys. This is for sure the way a mentally stable genius handles things.

During this press conference, Paul Ryan got up to talk about how very excited he is to fuck over poor people, while wearing what appears to be some kind of fleece jacket underneath a sports coat:

Rep. Paul Ryan: “We have a very bold agenda for 2018. We think this agenda is one that will appeal to everyone in between, between Democrats, Republicans and Independents.” https://t.co/QdXcIiKCwQ