Can Either Of These Total Newbies Beat Loathsome Utah Teabagger Mike Lee? Your Senate Sunday 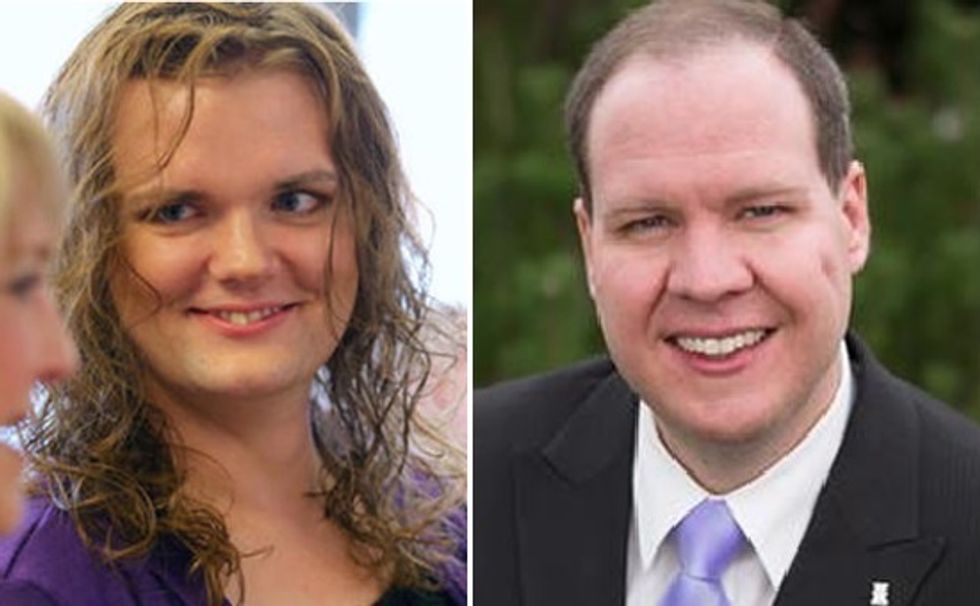 The grocery checker, the marriage counselor, and some dick at the Capitol

Back in April 2010, extremely conservative incumbent Senator Bob Bennett was rejected by his own damn party at the Utah Republican Convention because he wasn't extremely conservative enough. Utah Republicans chose Mike Lee instead, the Tea Party roared in victory, mere Very Conservative Republicans nationwide started worrying about getting primaried from the right, and somewhere in their secret submarine base under an extinct volcano in Kansas, the Koch brothers smiled knowingly. Since making it to the Senate, Mike Lee has enjoyed going to extremes, explaining that the federal government has no business banning child labor (gotta leave that up to the states), introducing a bill to protect the sacred right of every government and business employee to discriminate against gays, and, more recently, holding up a Senate bill to pay for non-poisonous water lines in Flint, Michigan. Not because he's in favor of lead poisoning, but because he had a snit about a completely unrelated energy bill. The lead poisoning of poor black children was simply a happy side effect of Lee's principled opposition to that other bill, because sometimes you have to take a stand. Lee is very proud of a 2015 study that found him the Senate's most ideologically extreme member.

Not surprisingly, Utahns think he's the bee's knees and he's expected to sail to an easy reelection in November. Ballotpedia ranks his seat as "safely Republican," as do most other professional prediction-makers. On the other hand, this is an extremely weird election year, and with a recent poll showing Hillary Clinton having a chance of beating Donald Trump in Utah, maybe Lee's seat in the Senate isn't so safe after all. As respected pundit Our Girlfriend put it, "I won't be surprised by anything that happens in November, anywhere." Also, thanks for the birthday Scotch and the "Customary Hot Beverage" mug, from which we are enjoying our coffee as we write.

So in this very weird election year, there are actually two Democrats in Utah who think they have a shot against Lee; their primary is coming up June 28. Both are political newcomers, which usually means "nice try" -- and probably does in 2016. But at least they're interesting political newbies. One is Jonathan Swinton, a marriage and family therapist from Sandy, which is an actual place in Utah. He says the partisan turmoil in Congress is so bad that the institution is ready for a visit to the marriage counselor, which he is. As he explained in an op-ed for the Deseret News,

Gone are the days when collegiality allowed those with opposing ideologies to actually work together. We now live in a political world where respect, compromise, cooperation and civility are not only hard to come by, but are seen as weakness, selling out, or failure to stand one’s ground. As citizens we are disgusted with dysfunctional Washington.

Swinton is all about reasonableness, moderation, middle-of-the-roadness, and bipartisan reacharounds across the aisle, which he thinks Utahns (a word that simply refuses to look right) will be happy to embrace as an alternative to Lee's hardline conservatism. In the same op-ed, Swinton says,

I am running on behalf of Utahns to take these qualities to the United States Senate. I tell my clients every day that if one of you gets everything you want, that means the other gets nothing. This approach leads to conflict in relationships; it also guarantees conflict in a democracy.

Not surprisingly, his very willingness to prove that he's ideologically centrist (for Utah) got him in trouble at the Utah Democratic convention, where a hell of a lot of Democrats refused to support Swinton because he opposes one basic defining principle of modern Democrats: he doesn't support women's right to choose an abortion, and he even supported a federal investigation of Planned Parenthood over those bogus accusations the organization was selling Fetus McNuggets on e-Baybee (what makes him a moderate is that he strongly opposed shutting down the government over the issue). Even though he's taken fairly conventional centrist Democratic positions on just about everything else (he likes the EPA and national parks, and wants the children of Flint to have clean water no matter what other bills are pending), that would be a deal breaker for us right there even if we were choosing a marriage counselor, let alone a federal representative.

Swinton's opposition to abortion divided Dems enough to prevent his getting the nomination outright at April's state convention (Utah, which never does anything normal, generally picks its candidates at the party conventions; there's only a primary if delegates can't agree on one nominee). And the candidate running against Swinton is an even more outside outsider: Misty Snow, a grocery checker from Taylorsville, just outside Salt Lake City. We're kind of all in for her, even though the "realistic" logic suggests Swinton might have the slightly better snowball's chance in hell against Lee, because if Utahns (*shudder*) pick her in the primary, they'll have made some actual history and nominated the first transgender major-party candidate for the Senate in American history. And hell, if the chances of actually ousting Mike Lee are that slim, why not make some history? Not that Snow sees that as the point, saying "I'm not running because I'm transgender. I just happen to be transgender."

Snow says she got into the race not because she really expected to take down Mike Lee (she's a cashier, so she can do math) but because she was frustrated that the only announced Democrat for the nomination looked so much like a Lite-brewed Republican. An admirer of Bernie Sanders, she's unapologetically progressive, working class, and advocates a $15/hour minimum wage, paid maternity leave, and single-payer healthcare. Also, you have to like what she says about Mike Lee (seriously, you have to, or you're disinvited from our birthday party):

"He is probably the second most loathsome guy in the United States Senate behind Ted Cruz," said Snow, citing the 2013 partial government shutdown stemming from a strategy to kill the Affordable Care Act pushed by Cruz and Lee. "He is wrong on every issue I care about. He is a horrible guy."

She didn't know beans about running for office or raising money, but attracted a lot of support from equally enthusiastic young progressives at the convention, including a University of Utah political science student who volunteered to be her campaign manager. The whole operation has an appealing Let's Put On A Show In The Old Bern feel to it, and again, we say go for it, because this is Utah after all, and while Snow's campaign may not be "realistic," it's doing something seriously important and very real, bringing a bunch of earnest Youngs into progressive politics in a very red state. That's how you get change started, and if Snow gets the nomination, it won't be the least bit surprising if veterans of her campaign start showing up in the legislature in a few years.

At a recent debate in Logan, both Snow and Swinton agreed that Lee is just the worst, and vowed they would both eschew big money from super PACs (which, sadly, is probably a pretty easy vow for Utah Dems to make even if they'd love to be corrupted by big donors). Swinton emphasized his let's-reason-together skillz, saying Congress needs a good mediator:

As a marriage counselor, I’m here to tell you cooperation is almost always possible... The Declaration of Independence was the ultimate compromise, and we can still reach agreements like that today. Having Republicans in office is the reality we need to work with, and if both parties continue to not budge on what they want, we will continue getting nothing done.

Snow wasn't buying it, and deployed a nice counter-analogy:

You can’t compromise with someone who isn’t interested in cooperating. I think we really need to make the case that Republicans don’t represent the working class the same way Democrats do. The Declaration of Independence wasn’t a compromise -- it was a divorce. Sometimes a divorce is a good thing, and we need to divorce from Republicans.

As a nitpicky history fan, we'd note that the real compromise document is the Constitution, not the Declaration, so we give 10 historical accuracy points to Snow. As of right now, a very rare small-state poll shows Snow with a slight lead, although nearly half of Democrats still have no preference between the two. Lee has no primary opposition, and Utah has an open primary system, so independents and even Republicans can vote in the primary, too.

We wish both of these wacky outsiders the best of luck, and hope that even if they get squooshed by Lee's outside money and power as an incumbent (not to mention Utah's overwhelmingly conservative electorate), they may have gotten a little fire started under the progressive minority in the state. Here's hoping Utah makes a little history in a couple weeks.

Want to help Misty Snow become a really cool footnote, and maybe something more? Her donation page is here! Want to support the more pragmatic outsider who, with the right electoral math and perhaps a miracle, just might pull off an upset? Jonathon Swinton's donations page is here! And needless to say, Yr Wonkette will need a lot of coffee and scotch to get through doing a Senate race per week between now and November, so you can help the Senate Sundays project out right here!