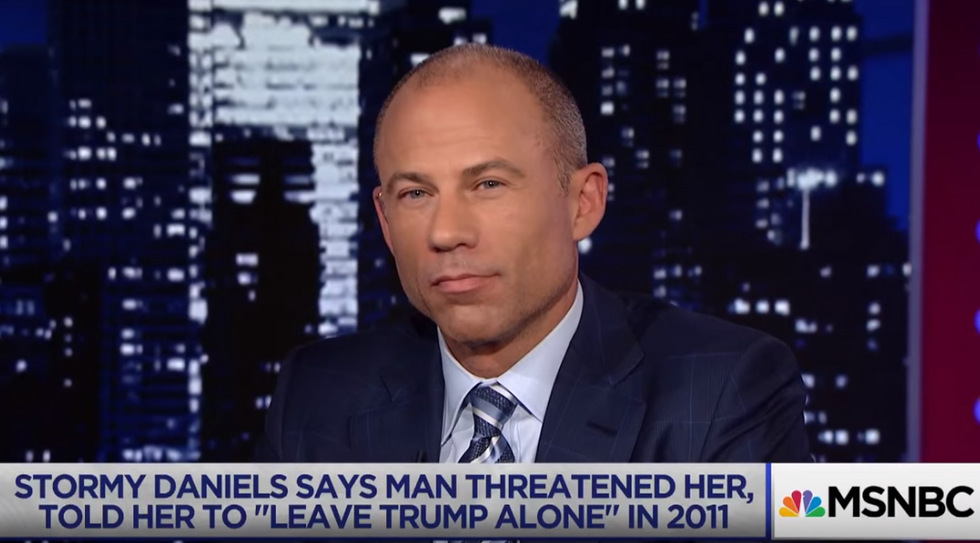 There was a good bit of lawtalkin', and it's probably easiest to understand what happened -- and more importantly, what's going to happen when Judge Wood starts making decisions -- by thinking about what each of the parties wants. Because there are four teams here, and not a lot of natural alliances.

At some point, Michael Cohen, the world's goofiest lawyer, will have to decide what he wants more -- to stay out of jail, or to protect Mister Twump. He can lay on that "Boss, I miss you so much" shit all day long. But one day soon, he's going to have to choose.

That day is still in the future, however. Right now, every document Cohen ever touched has been seized by the FBI, and he desperately wants to claw as much of it back as possible. Remember that Judge Wood appointed a special master to weed out the anything privileged, rather than using a segregated unit of FBI agents known as a "taint team." Cohen's lawyers are also wading through the 1.3 million documents, but they're starting to fall behind the special master.

"I can assure the court that we're working around the clock," Harrison says.

Wood asks how many lawyers are working on this.

But Judge Wood isn't having it, and ordered them to hurry up, or it's back to the taint team.

Wood says review of materials must be completed by June 15. After that, the remainder of the materials go to a taint team.

Also, the fact that they are recovering the shredded docs explains why they conducted the raid: There was (obviously a justified) reason to believe that evidence was being destroyed. https://t.co/ExYQoyTXmT

But if you raided our house today, you'd find some ancient Mastercard bills in our shredder, and you'd have wasted a lot of time. So ... eh?

But back to Michael Cohen, who is very hot to keep Michael Avenatti out of this case. Which is a rational goal, since Avenatti keeps going on television and calling him a guilty idiot who can't practice law and is going to jail. There's also the little matter of Avenatti publicizing Cohen's leaked emails and personal financial data. Let's just say, these guys are probably not going to get a beer and hug it out bitch after this trial is over.

Cohen's lawyers pointed to recent bankruptcies and unpaid tax liens against Michael Avenatti's law firms as evidence that he should not be allowed to represent Daniels before the court pro hac vice (i.e. just this once, since he's licensed in California and not New York). This would probably not have persuaded Judge Wood, but it didn't really matter because ... well, we'll get to that.

What does Donald Trump want? You mean, besides cheeseburgers, blondes, and absolute power? Well, right this minute, he wants most of what Cohen wants. He'd like to keep as much of his communications as possible away from the DEEP STATE Hillary Lovers in the Justice Department. And he'd like Michael Avenatti to go back to California, preferably joining an order of Benedictine Monks that requires a vow of silence.

There was a funny exchange in the court today where Trump's lawyers tried to shame Michael Avenatti for his bankruptcies and inappropriate tweets.

Avenatti notes that Hendon's client, Trump, "has tweeted about this matter in great detail. The irony of that, your honor, is palpable."

Well, if you believe the Fox goon squad, these guys would like to eat Trump's liver with a nice chianti. But they were almost silent at this morning's hearing.

In the story, great quote from professor @JoyceWhiteVance - a longtime ex-prosecutor:

“If I was the prosecutor, I’d duck the drama between Mr. Avenatti and Mr. Cohen, so long as it wasn’t interfering with my case, and see what drops out of their pockets during their fist fight.”

Makes sense to us.

Okay, real talk. We love this guy, but he ain't perfect. Michael Avenatti wants a lot of things that have absolutely nothing to do with this case, and he's using this litigation as a means to get them. That's not to say that he's exploiting Stormy Daniels, who appears to be onboard for this ride. But clearly Avenatti wants to go down in history as the lawyer who took down a president. And when the rubber met the road today, he chose television over law.

At issue this morning was his application to appear before Judge Wood's court pro hac vice to represent Daniels's interest in whatever privileged materials pertaining to her may have been seized by the government in the raid on Michael Cohen. Just this week, Avenatti released more emails between Cohen and Keith Davidson, Stormy Daniels's former lawyer, suggesting that the two of them conspired to keep the Daniels story out of the papers a week before the election. And two weeks ago, he released financial documents showing that Michael Cohen hoovered up millions of dollars in cash from companies trying to curry favor with the Trump administration. So you can understand that Cohen's counsel was a wee smidge testy this morning when Avenatti accused them of leaking secretly recorded audio to a reporter. Pot meet kettle!

He's worried about recorded conversations. He says he got a call this week from a "member of press" who apparently played him a recorded convo between Cohen and Davidson. Wow. He accuses Cohen side of leaking.

Says that during the phone call, Davidson disclosed to Cohen attorney-client privileged communications with Stormy. (Tho it's not clear if Avenatti actually heard the call itself).

Ryan: If we had released those audio tape to a reporter, it would have been the biggest story in America. It has not occurred.

"I am unaware of any release of an audio file of this kind."

Now, let's not let what came after this distract us from this here admission that Cohen DID make tapes relevant to Daniels's case. Because that is a BIG DEAL. And the fact Avenatti looks like kind of an asshole for insisting in the courtroom that they remain privileged, then jumping in front of a microphone to call for their release 10 minutes later, doesn't change that. Just because you're a ham who likens these recordings to the Nixon tapes doesn't mean that you're wrong!

BUT ... Judge Wood slapped Avenatti around pretty good today. She told him he'd have to cut the shit with the constant media appearances, since they're poisoning the jury pool against Michael Cohen in a potential criminal trial.

Wood on Avenatti: "I want you to participate, or not be in the matter at all.

I don’t want you to be in some sort of limbo where you’re able to denigrate Mr. Cohen...This conduct is inimical to eventually giving Mr. Cohen a fair trial (if that happens)."

So if he wants to represent Daniels in New York, he's gonna have to shut his mouth.

New filing in In the Matter of Search Warrants Executed on April 9, 2018: Withdrawal of Motionhttps://t.co/D33RLVuwfSpic.twitter.com/R5uyMVlxwN

Well, that didn't take long. Moments after leaving the courtroom, Avenatti withdrew his application to appear before Judge Wood's court. If Stormy Daniels wants to intervene in the case, she's going to do it with a different lawyer. But it's New York ... she'll find one.

Update, for the worried and/or confused: Michael Avenatti will still be blowing up our airwaves as Daniels's lawyer; he just won't represent her in New York court.

You want the Cliff Notes version? FINE. Cohen's lawyers are freaking out, and if they don't hurry up with those documents, it's back to the taint team. Avenatti decided he'd rather take potshots at Cohen and Trump on television than personally represent Daniels in the New York case. And most importantly, Lordy, there are tapes.

You liking these lawsplainers? Please click here to fund 'em!