Can Tom Price Beat Off Marco Rubio For This Month's Flexible Spine Award? 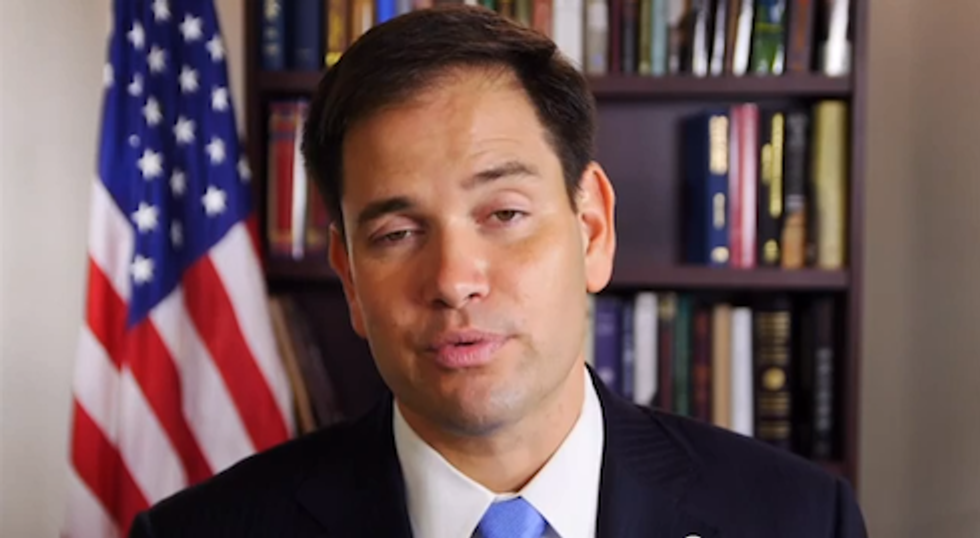 Marco Rubio lived out another chapter -- or section heading -- in his autobiographical pamphlet "Profiles In Vacillation" this week. First, Rubio briefly -- accidentally? -- admitted the truth about the Republicans' Big Fat Tax Cuts For Rich Fuckwads Act of 2017 in an interview with The Economist in which he said supply-side economics doesn't help anyone but the aforementioned Rich Fuckwads. Then he very quickly scampered back to the bosom of Big Tax Cuts after all the liberals on Twitter said "No shit, Sherlock" and all the conservatives pointed and shrieked at him like Donald Sutherland at the end of Invasion of the Body Snatchers. To prove he truly was Of The Body, he wrote an op-ed for the National Review insisting the GOP tax cuts were the kindest, bravest, warmest, most wonderful tax cuts he'd ever voted for in his life. Balance has been restored to Republican faith-based economics.

Still, it was mildly amusing to see Rubio insist in that Economist interview that he's willing to be the face of "reform Republicanism," and to suggest -- just for a moment -- that massive tax cuts for corporations aren't a recipe for endless prosperity:

“There is still a lot of thinking on the right that if big corporations are happy, they’re going to take the money they’re saving and reinvest it in American workers,” he says. “In fact they bought back shares, a few gave out bonuses; there’s no evidence whatsoever that the money’s been massively poured back into the American worker.”

Whoa, Marco Alinsky-Marx-Sanders-Warren, dial it back a little, will ya? So he did: In the National Review piece (cleverly titled "Two Cheers for Corporate Tax Cuts" to show he's still just the tiniest bit mavericky), Rubio says the tax cuts were really, really terrific for ordinary folks just like you and you and you, 2024 (or 2020? Maybe?) presidential primary voters, but they could have been so much better, you see, so he's not reversing himself, he's just doing what counts for "nuance" when you're a man whose firm conservative principles rest on a firm Bedrock of Silly Putty. It was a terrific tax cut bill, and tax cuts are great for everyday Americans; he just wishes that all Americans could revel in the joy of deep tax cuts for everyone.

In other news of Great Republican 180's That Weren't In A Clint Eastwood Car Chase, former secretary of Health and Human Services Tom Price explained Wednesday that he hadn't changed his mind at all about negative effects of Republicans' killing off the Affordable Care Act's individual insurance mandate -- another part of the tax cut bill. Here are his actual words from a speech at the World Health Care Congress Tuesday:

There are many, and I’m one of them, who believes that that actually will harm the pool in the exchange market, because you’ll likely have individuals who are younger and healthier not participating in that market, and consequently, that drives up the cost for other folks within that market[.]

But yesterday, having seen a bunch of headlines saying he had changed his mind on the individual mandate -- like to pick one at random, this one that reads Tom Price Sad GOP Killed Obamacare Mandate, ARE YOU FUCKING KIDDING ME? -- Price issued a clarification: Sure, the GOP policy will take Young Healthies out of the exchanges and as a result, premiums for everyone else will increase, but that's a very good thing. Because freedom, the invisible hand of the market, and also Tom Price Has No Fucking Clue How Insurance Works:

The individual mandate distorted healthcare markets by forcing younger Americans to subsidize other populations. It did so by coercing them with financial penalties into purchasing insurance that many never wanted and don't believe they need. At an event yesterday, I explained how repealing the mandate would affect certain populations in the absence of additional reforms, like the expansion of Association Health Plans and other measures that use market forces to drive down costs.

Unfortunately, some have reported my comments outside of that context. Repealing the individual mandate was exactly the right thing to do. Forcing Americans to buy something they don't want undermines individual liberty as well as free markets. The only fair and effective way to bring down healthcare costs is to allow markets to create more choices for consumers and small businesses.

Impressed by Price's manly firmness, or at least his insistence that he was just as impervious to reality as ever, Marco Rubio decided he'd give it a whirl himself, but accidentally endorsed the Green Party platform, then immediately walked that back with a call for the reinstatement of child labor.

Don’t take for granted that the institutions you love will always be there, like literacy, and Wonkette. Click to save at least one of them!