Can We Get You To Click On A Post About Trade War If We Tell You Trump Shouts 'Where's My Peter?' 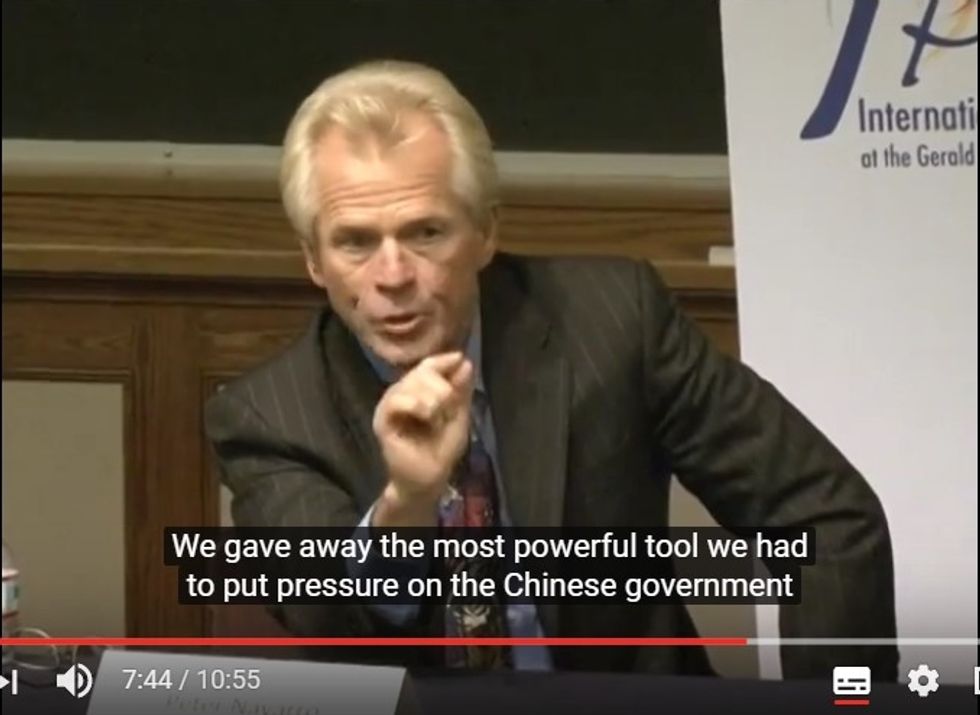 Did you ever listen to Donald Trump talking and ask yourself, WHERE THE HELL DID HE GET THAT CRAZY IDEA? Like, some of the time, right? Well if the Trump crazytalk in question involves trade or economics, chances are he got the idea from this guy, Peter Navarro.

Navarro is best known for penning anti-China polemics such as The Coming China Wars (2006) and Death by China: Confronting the Dragon – A Global Call to Action (2011). Because if you print a lie on a bumper sticker, illiterate rubes will not only believe it, they'll elevate it to national policy.

But when the New Yorker's Adam Davidson interviewed the Harvard-trained economist during the 2016 campaign, he couldn't find any other actualfactual economists to back him up.

Navarro’s views on trade and China are so radical, however, that, even with his assistance, I was unable to find another economist who fully agrees with them.

In brief, here are three of the dumbfuckingest things Peter Navarro believes.

Even conservative outlets think Navarro is a total loon. The National Review refers to him as Trump's Nutty Professor. Forbes calls him Alarmingly Ignorant About Trade. And Foreign Policy wonders why Trump’s Top China Expert Isn’t a China Expert. But Donald Trump don't need no stinkin' experts, so he made Navarro Director of the White House National Trade Council. He knows that the US has been run by sadweak suckers, and he's going to negotiate all the best trade deals from here on out.

If you want a more detailed economic critique of Navarro's loony shit, knock yourself out. Because this article is really about a White House where all the grown ups have agreed to stick their fingers in Trump's waxy ears and shout, LA LA LA HE CAN'T HEAR YOU! every time Navarro walks in the room.

Prior to John Kelly bringing the hammer down as White House Chief of Staff, Navarro had open access to Donald Trump. Per Politico,

Navarro’s reputation as a trade warrior has so ingratiated him with Trump that when other administration officials initially cut Navarro out of trade negotiations with Chinese President Xi Jinping at Mar-a-Lago in April, the president insisted that he be by his side, asking “Where’s my Peter? Where’s my Peter?” according to a former White House official.

We'll let you all speculate on Trump's difficulty locating his favorite member...of the National Trade Council. As of today, however, that member is looking distinctly limp.

From the Eisenhower Executive Office Building, Navarro leads the White House Trade Council, but he’s largely a one-man band, with only two staffers. Prior to Kelly’s entry, Navarro enjoyed a private 15-minute conversation with Trump at least once a week, where he would “rile him up” on trade, according to a senior administration official.

As a deputy assistant to the president, he’s lost access to some key policy meetings in the White House that under Kelly are now reserved for principals or key senior staffers.

The Globalist wing got a minyan together and decided they were NOT going to let that wingnut Navarro talk The Old Man into provoking a global trade war and crashing the economy. Not until they get their tax cuts, at least. So instead of pulling out of NAFTA and KORUS (with South Korea) as Candidate Trump promised, the Dealmaker in Chief will be "renegotiating" them! #MAGAMAGAMAGA!!!!1!!

Sarah Huckabee Sanders denies that Navarro has been sidelined, so you know it must be true.

“There’s certainly no effort to keep Peter out of meetings,” said White House press secretary Sarah Huckabee Sanders. “The distinction isn’t that he doesn’t have access. He’s presenting his case, both parties are walking through the policy together, and meetings are taking place and some of those conversations are being thought through more thoroughly before they go to the president, so it’s not a debate in front of the president, but more a laying out of the vision.”

“The president has never been shy that it’s an America-first policy when it comes to trade,” Sanders added. Navarro did not respond to a request for comment.

Okay, Sarah. Sure. Can't wait to see you joke about this at the Emmys next year.

As for you, Peter, it looks like your rabbi has left the building.

“No one gives a damn what he says other than Trump,” [one prominent White House] lobbyist said. “With Bannon gone, they look at their watch when he talks.”

Thanks for not crashing the global economy, we guess? At least Gary Cohn is good for something.