Can We See Ben Carson's Birth Certificate, Just To Prove He Was Really Born? 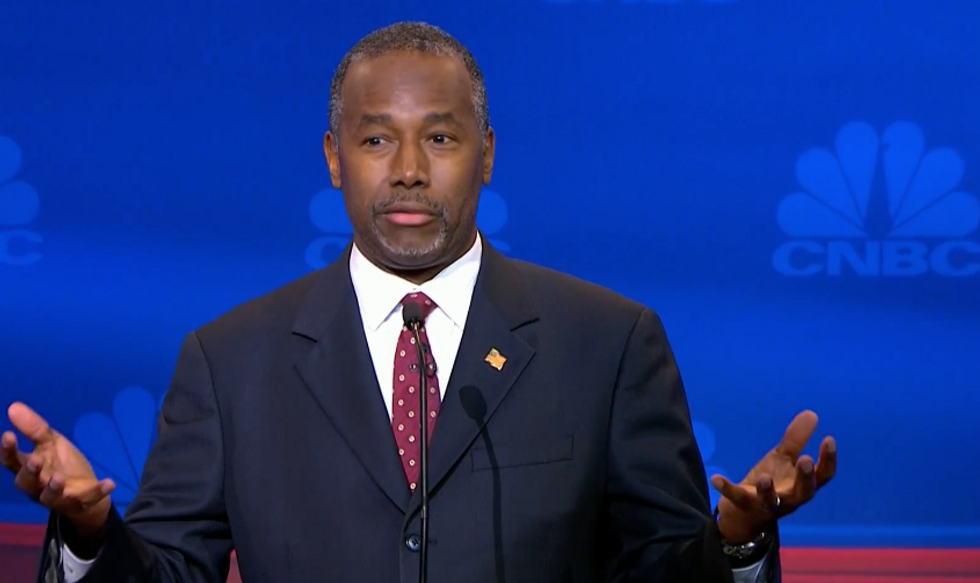 "Doctor" "Ben" "Carson" -- if that is even his real name, and we have reason to doubt -- has some real cool inspirational stories about his life. He grew up on a special kind of private sector welfare, which differs from the Big Government kind lazy moochers exploit nowadays. He aced his way through college because God whispered the answers in his ear. He defeated an armed would-be robber in a "Popeyes Organization," with his words. He stabbed a man named "Bob" just to watch him die. And he cured his own cancer with some vitamins.

None of that, it seems, is true. Except maybe God giving him the answers to get through school, because it appears increasingly likely he could not possibly have done it on his own.

Here is your latest Not True After All story from Carson, which he is actually admitting, for a change, is Not True:

[The U.S. Military Academy at West Point] academy has occupied a central place in Carson’s tale for years. According to a story told in Carson’s book, “Gifted Hands,” the then-17 year old was introduced in 1969 to Gen. William Westmoreland, who had just ended his command of U.S. forces in Vietnam, and the two dined together. That meeting, according to Carson’s telling, was followed by a “full scholarship” to the military academy.

West Point, however, has no record of Carson applying, much less being extended admission.

In a refreshing departure from Carson's usual routine of insisting his unlikely if not impossible stories are true, and The Liberal Media is just out to gotcha him -- possibly in conjunction with his "enemies" throwing "submarines" at him -- the Carson campaign admitted to POLITICO that OK, ya got him this time, he did not win a full scholarship to West Point.

Undoubtedly, the larger point of his story -- work hard, kids, and you too can win a full scholarship to West Point, just like Dr. Carson! -- still stands, even if some of the details, like how he did not win a full scholarship to West Point, are technically less than accurate. We imagine the reason is similar to one he gave not long ago about why his tale of youthful thuggery might also not be exactly as he has been telling it for so many years:

“The explanation is that that occurred over 50 years ago,” Carson said in response to a question from BuzzFeed News in a media availability after a rally here. “Have you ever played that party game where you whisper into the person’s ear and then they tell it, and by the time it gets all the way back around it’s a different story? That’s what we’re talking here.” Carson was referring to the game of “telephone.”

The doctor, it seems, has played an awful lot of telephone with himself (if that's what they're calling it these days). Which is why Baltimore police cannot verify his amazing tale of heroism in a "Popeye's organization." And why his campaign has explained that Carson didn't even know he was shilling for quack nutritional supplements company Mannatech, for 10 years. And why archaeologists have been unable to verify Carson's claim that Egypt's ancient pyramids are big warehouses full of grain.

Carson has said it is not necessary for someone who wants to be elected president of these United States to be "fully briefed" on all the details, like what is Cuba, or why Israel doesn't "just adopt the system we have," given its "complex" legislative system is a bit much for the world-famous neurosurgeon's brain to comprehend.

One would hope, though, that the next president would at least be "fully briefed" on his own inspiring life story, which he offers as his only qualification for commander-in-chief and leader of the free world, given his lack of experience in elected office -- just like, according to Carson, "every signer of the Declaration of Independence."

Another subject, apparently, on which he has yet to be fully briefed.