Cardi B: Obamacare Helped Get Your P*ssy Checked!

The government of the United States has been shut the hell down for a cool minute now. It's so bad that cracks are finally beginning to show even amongst Trump's broke ass farmers, while even people who HAVE money, like Cardi B, are becoming concerned as hell about government workers not getting paid. For 28 days (and counting) our president has been bumbling around DC in utter and complete failmode. With Nancy Pelosi busy at the moment trying to keep Trump from siccing actual terrorists on her, Cardi B decided to step up and try her hand at the Democratic Party pastime of completely owning Trump.


In her minute-long rant, she hits important topics in politics like: Obama and previous shutdowns, Trump and racism, economic anxiety and social justice; healthcare topics like high blood pressure, and most important of all? How much easier it is to get your p*ssy checked out under Obamacare than it was before. She can tell you better than I can, let's watch.

Cardi B Speaks On The Government Shut Down www.youtube.com


"Hey Y'all. I just wanna remind you, because it's been a little bit over three weeks, okay. Trump is now ordering, as in summonsing, federal government workers to go back to work without getting paid."

An issue that comes up often in the music of Cardi B is her damn money being exactly where it's supposed to be. Cardi B, just like many Americans, knows the sick emptiness and cold dread that accompanies genuine economic anxiety. The look on her face when she snapped about Trump ORDERING people back to work with no pay reflects on millions of faces across the nation.

Um, I clearly heard "so you b*tches could go check y'alls p*ssies at the mutha fuckin' gynecologist with no muthafuckin problems," right after that line about Grandma's blood pressure, WaPo. This was a problematic omission; we have a reported record high STD rate in the country right now, so she was being dead ass serious about the importance of getting regular women's reproductive health check-ups. Get your p*ssies checked out, ladies.

"Our country is in a hellhole right now. All for a f‐‐‐ing wall. I feel like we need to take some action. I don't know what type of action, b‐‐‐‐, because this is not what I do. But b‐‐‐‐, I'm scared. This is crazy. And I really feel bad for these people that gotta go to f‐‐‐ing work to not get motherf‐‐‐ing paid."

There comes a moment when each person has their own personal epiphany about Trump and it scares the living shit out of them. Realizing that your president is a fucking idiot who is also maliciously out of touch and vainglorious is enough to send even the strongest of women into a catatonic state. Not only is he willing to watch Barb and Bob Everyman suffer, willing to risk the economy crashing, and willingly losing popularity with his own base, but he also pretends the nation is totally on his side!

Trump is lying, of course. The nation isn't on his side at all. But one person did kinda sorta maybe pick up some support from our Democratic legislators for her epic rant: Cardi B. After her rant took over Twitter, Senators Schumer, Schatz, and Murphy could NOT decide if it was appropriate to retweet Cardi B or not because -- gasp! Profanity. 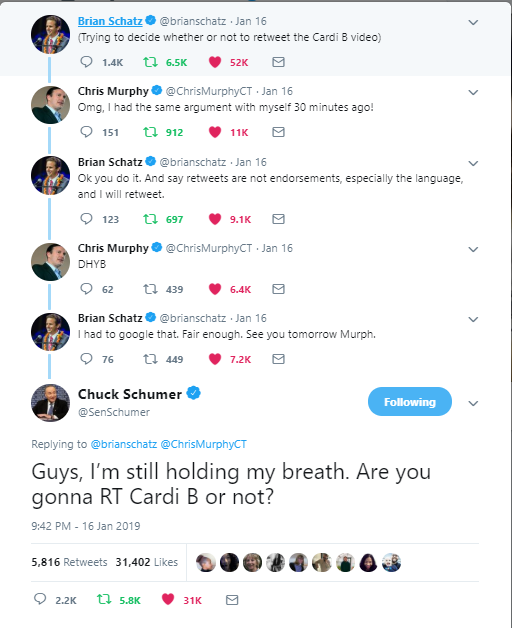 Oh, that's cute. But already, the voices of the Mediocre Man Brigade are pleading for her to STAY OUT OF POLITICS!

"Soo many people under my comments talking about I shouldn't talk politics ,I don't know what I'm talking about , I'm dumb ! Well I know a little something something.. I know 800,000 federal government workers won't be getting paid till the shutdown is over and government assistants program are shutdown as well as in NO WELFARE , NO WIC,SECTION 8. PAY ATTENTION !!! This can go on for months and it will affect our homes and Country."

On the strength of that post alone, I'm already willing to replace Susan Collins with Cardi B, who obviously pays close attention to how politics affects her community, especially those who are in the most need. Fundamentally, Rap has always been a musical genre of politically minded storytelling that focuses on social issues, like poverty, that affect the black community on the micro and the macro levels. It's not surprising that someone like Miss Cardi B would speak out about the shutdown, ESPECIALLY since this shutdown is making everybody's money extra funny. Don't be surprised the next time she speaks out against the wishes of those who would prefer she " stick to rapping" or says she knows nothing. Cardi B says what she wants when she wants to. Respect it.

And check your p*ssy.