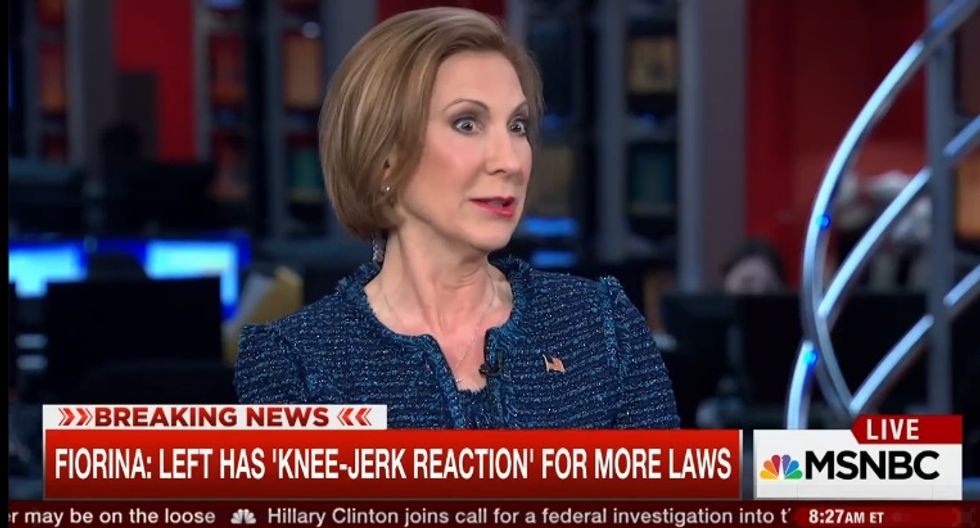 Bless her corporation-wreckin' heart, Carly Fiorina does at least know two things for sure: 1) Terrorism Bad; and 2) NRA Good. Unfortunately, those two things sort of got all tangled up for her on Thursday's Morning Joe, when she found herself having to explain why people on the federal terrorist watch list should be able to buy guns. Rather than being honest and saying she opposes any effort to close that loophole because the NRA insists it remain open, Fiorina stuck to the NRA's Approved Talking Point on allowing gun sales to those on the Watch List: It's a flawed list, and so it would be terrible if an innocent person were prevented from getting a gun.

Fiorina explained the real problem is liberals who demand more restrictions on who may have guns -- like, not terrorists -- instead of enforcing the laws we already have in this country (which the NRA also fights like crazy), because "the left wing" is blinded by ideology. Unlike, say, the NRA and its bought-and-paid-for politicians. Mika Brzenzski suggested not selling guns to people on the terror watch list might be a "common sense" step, but Carly wasn't fooled by that nonsense:

Fiorina: That's kind of a red herring honestly. if somebody is a suspected terrorist on a watch list, they can be indicted at any time, and once you're indicted, you cannot own a firearm. So let's enforce the laws we have, let's start with that. I honestly think that's why people are losing faith in their government, losing faith in their political...

Fiorina: Well you know my best friend's husband was on the watch list, for years, it was a complete mistake; he happened to be a gun owner. If I had utter faith in the competence of government, I might agree with that, but do you? I don't! The government screws up all the time...there are litanies of things the government makes mistakes on. [...]

This is a red herring to suggest that we should have background checks for those on the terror watch list. Why aren't these people prosecuted?

Well, here's the thing, which a presidential candidate ought to know: As the FBI explains, people go on the watch list "when there is a reasonable suspicion that the person is a known or suspected terrorist." It's a much lower standard of evidence than needed to charge someone with a crime, but high enough that the government doesn't want those people getting on planes.

Now, Fiorina is right about this much: The watch list is full of errors, and as the ACLU and others have pointed out, it's got a lot of people on it who have done nothing wrong. Getting off the list after an erroneous listing can be an ordeal. But, hey, here's a nutty idea: Rather than throwing our hands up in the air and saying, "Welp, guess it's better for some potential terrorists to have easy access to guns than to inconvenience anyone who wants a gun," what about fixing the problems with the list -- implementing an appeals process, for instance -- and then using it as a tool to keep people who shouldn't have guns from getting guns? Like, let's say, the over 2,000 people on list who bought guns between 2004 and 2014. Haha, we know, the government is always incompetent, except of course when it comes to shooting unarmed teenagers and sending people to death row. Strange Fiorina even wants to run it, no?

The NRA got its way once again on the matter Thursday afternoon, as the Senate voted again against two proposals to limit gun sales to those on the terror watch list. By a 54-45 vote, senators killed an amendment by Dianne Feinstein that would bar gun sales to anyone on the list, though a slim majority supported an amendment by Texas Republican John Cornyn that "would let the government delay firearms sales to suspected terrorists for up to 72 hours," and permanently, if a judge approved. But it was only a 55-44 "win," so it couldn't actually survive a filibuster. And as the AP notes, both measures were symbolic votes anyway, as the amendments were added to yet another bill to repeal the Affordable Care Act, so we won't cry too many bitter tears over the loss.

Still, it's an important message for America: Even the day after yet another mass shooting, one that appears to have been committed with legally purchased weapons, Congress is in no mood to risk the wrath of the NRA, which would be far, far worse than a mere 14 dead people in California.