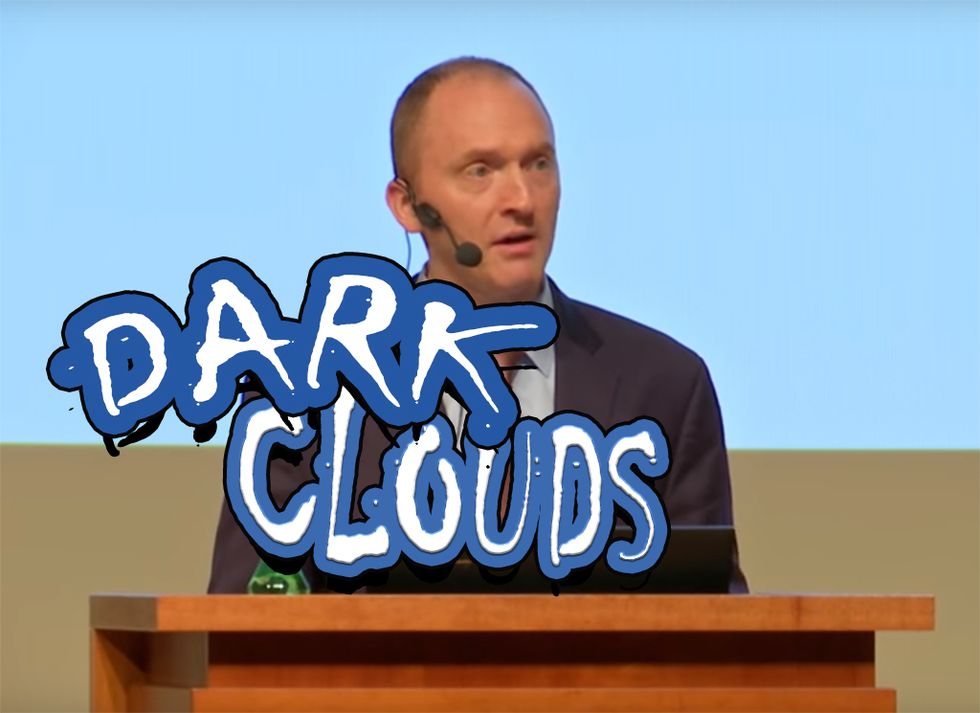 Happy Tuesday, Wonketariat! Here's some of the things wemay be talking about today.

A transcript of Carter Page's testimony before the House Intel committee has been released, and it confirms the dark cloud" looming over the him (as noted in THE DOSSIER) after he met with Russians during the campaign. RUH-ROH!

Trump's bodyguard and loyal Big Mac fetching dog, Keith Schiller, will sit before the House Intel Committee and try to explain what happened in that Moscow hotel room back in 2013. (HINT: It was pee hookers.)

Paul Manafort's sidekick, Rick Gates, had a secret side hustle as a grifty movie producer, and because Gates' former partners are spilling the beans on how they all did it, Robert Mueller is smiling.

Former Trump campaign aide Michael Caputo never worked for Russia -- just check his Wikipedia page! It no longer contains any mention of his work for Putin. ASlso, one of his employees was caught using multiple accounts to scrub Caputo's page.

Princess Ivanka and Steve Mnuchin are jumping out in front of the Trump Train and trying to frame the Trump/Ryan tax cuts (for the super rich) as "tax cuts for the middle class" by reminding all the poors that their broken backs are what holds up their evil corporate overlords.

The suit and tie crowd have descended upon the Hill in an attempt inject their pork and sweetheart deals into the Trump/Ryan tax cuts (for the super rich) -- with the hope that carefully crafted tweets can twist the appropriate arms.

GOP leadership is reminding everyone that it's still too soon to talk about gun control, stressing that they want to wait until their thoughts and prayers reach the souls of more murdered children.

Under a new policy push from the DOD and House Armed Service Committee, the Defense Department could approve drugs and medical devices, circumventing the FDA, because why should The Troops have to wait for the FDA to finish doing all its science bullshit?

While REXXON readies himself for hibernation, State Department staffers are working to push a bunch of Clinton's emails into the public record, severely irking the rank-and-file.

Trump's new DHS is ending temporary protected immigration status for Nicaraguans and telling them all to go back to Mexico.

The Bannonites and Trumpists trying to oust Mitch McConnell are going to be sorely mistaken if they try to vote against him now that McConnell is surrounding himself with big, thick books on rules and procedures that they're too stupid to know about.

The House Freedom Caucus crazies are picking their primary targets for 2018 and trying to snipe GOP seats by dumping cash on other lunatic fringe candidates.

The star witness in the Benghazi trial took the stand yesterday, and the bastard didn't even finger Hillary Clinton as the triggerman.

Dad-gummit! Olds are coming forward and telling Uncle Sam that they want to puff on maryjane too, and veterans are talking about how the magic medical herb has helped them combat PTSD without drug cocktails.

VIRGINIA! It's election day. Get your ass out there and vote for Ralph Northam. It's supposed to be rainy and cold today, so bring a jacket, your neighbors, their stoned-out basement dwelling college student, and all the feeble olds who just need a hand!

Trump is in South Korea today, but earlier this morning he was talking about all the "progress" he's made trying to convince North Korea to "make a deal." Hey, remember last month how he threatened nuclear war, and tweeted that REXXON needed to fuck off back home?

A Russian talking head went on teevee to talk about all the sex Americans aren't having now that Harvey Weinstein has forced all of the men in America to wear penile cages and chastity belts.

Apple was never hiding its money in a beautiful Not American paradise in the Caribbean, it was hiding it in Ireland, and other parts of Europe where it didn't have to help us fix our roads and schools in exchange for buying overpriced phones and computers. So there.

Harvey Weinstein desperately tried to hide exposing himself in the New York Times as a fat, fucking pervert by literally hiring super spies (corporate espionage and ex-Mossad) to stalk women and journalists.

Some lady politicos in the great state of Texas decided to start their own "Burn Book of Bad Men" over a year ago, listing 38 men who ALLEGEDLY committed sexual assault.

Everybody run to to Twitter and start following James Comey! Watch him say cryptic things like, "Goodbye, Iowa. On the road home." Where are you going, Comey? WHAT DOES IT ALL MEAN? Should we assume deer dead?

A super rich guy eyeballing the Oval Office is very mad that Fox News pulled his expensive ads calling to impeach Trump, but Fox says he can keep his money because the ads made all their brainwashed olds have many bigly sads. :(

If you can, take a minute to watch Colbert talk about Sutherland, Texas, Las Vegas, gun control, and doing nothing. There's no joke here.