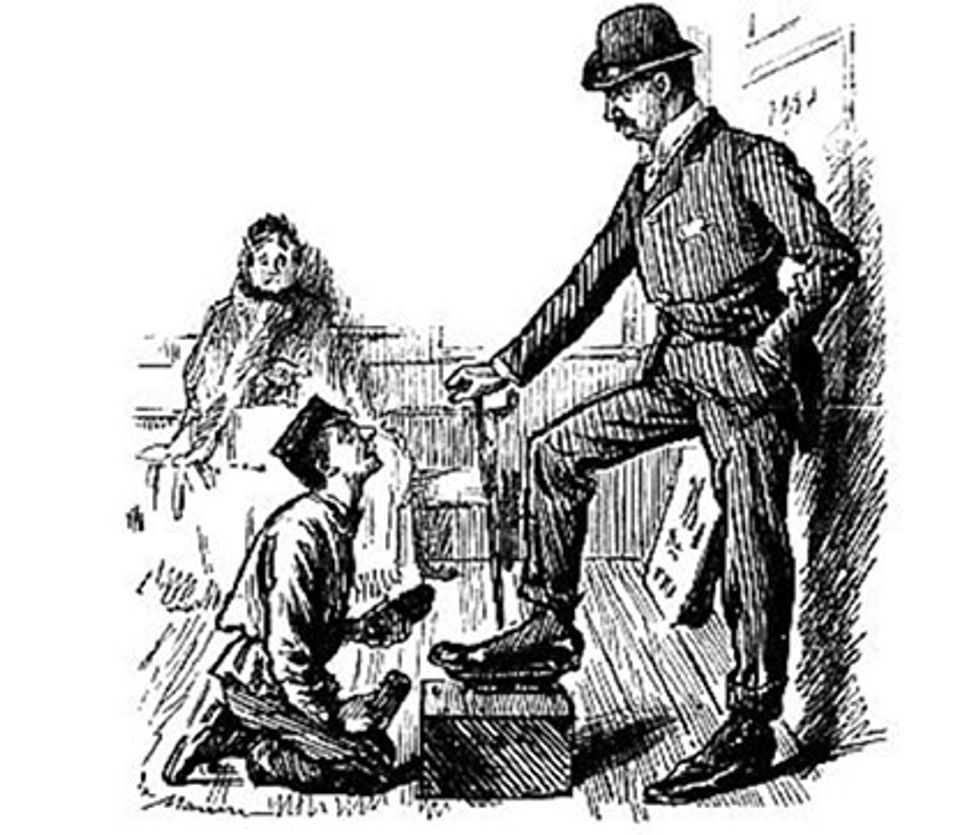 I say, if you'd just develop a work ethic young man, you could be rich. What ho, have a tuppence and don't spend it all at once.

Jamie Dimon, the CEO of JPMorgan Chase (not a typo, actually), would like everyone to stop bitching about "income inequality," which is not a thing at all. The financier feels just as equal as anyone on his corporate jet, thank you very much, and said as much at a Q&A session at the Detroit Economic Club Thursday. We really needn't worry that the gap between average workers' pay and CEO compensation has exploded since the 1980s. Why? It's quite simple: Things are much, much better now than they were then, all in all. Says Dimon:

If you go back 20 years ago, cars were worse, health was worse, you didn’t live as long, the air was worse. People didn’t have iPhones.

Well then, we guess that means a lot of people should lift a glass of bubbly to progress -- or they would if they could take the time from their second or third jobs. Also, too, Dimon told the event's moderator, Chuck Todd (of course he's doing double duty as a toady for CEOs), that "you can take the compensation of every CEO in American and make it zero and it wouldn’t put a dent into" inequality. Not that anyone was suggesting any such thing, but it's every bit as good an argument as saying we shouldn't raise the minimum wage because what if you raised it to $100 an hour, then no one could afford a Big Mac, you socialist!

This is just the latest wisdom from the loathsome money badger Dimon, who in the past has argued that if banks are regulated, they'll just go away (same if they have to pay criminal penalties merely for breaking some laws) and that Elizabeth Warren is too simple to fit the complexities of international finance into her little lady brain.

American life expectancy in 1995 was 75.62 years. Now, it's true that by 2012, that had indeed gone up to 78.74 years, mostly due to the decline in smoking, which we're fairly certain has nothing to do with CEO salaries, except perhaps at the "Altria Group" (formerly Philip Morris). Cars are indeed safer, though hahaha, that's due to government regulation, which is supposed to be evil. As for the air quality, what improvements there have been have come only with the greatest possible whining and resistance by CEOs. At least the financial services sector mostly pollutes with bullshit and political corruption, not chemical toxins.

But yes, many of our toys are a lot nicer, so we really should be happy that median family income in constant dollars has been stagnant for decades, while productivity is through the roof. Funny how all the gains from that increased productivity haven't managed to trickle down to the peons, who don't need to feed, shelter, or educate their kids since we're all busy playing Words With Friends.

On the up side, trading in pitchforks and torches has been steadily picking up.