Cartoon Violence Does A Double Take 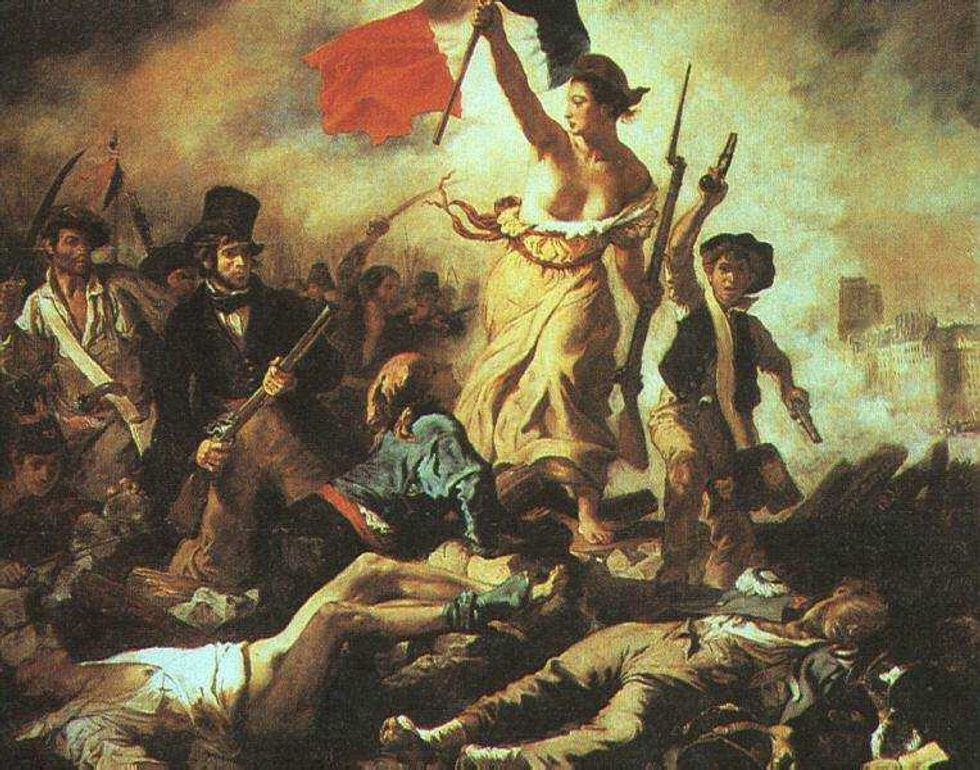 Since the first primitive cave-men began telling jokes about mammoth, the double-take has been the goal of everyone with delusions of being funny -- or at least everyone with delusions of being funny who doesn't work with props. It's that magic moment when you say or write or draw something that gets a laugh at first, and then your audience starts to move on to the next thing -- but then they think about it for a minute, really think about it, and the point sinks in, and that smile of recognition starts to spread across their faces. They get it. It doesn't happen very often, but it's a great feeling when it does.

Sometimes, though, you get a double take for another reason: because what you said is nonsensical bullshit, and your readers are all like, "Wait, what? Oh, hell no." And that's the way you'll probably react to this week's cartoons.

Proposition: Under Hillary Clinton's proposed health care reforms, the only medical treatment available will be leeches. Lots and lots of leeches.

But on second thought... In fact, America's well-known aversion to leeches is all that stands before us and a soul-crushing descent into single-payer Communist totalitarianism. When George Washington was bled to death by taxpayer-subsidized leech wranglers in 1799, our young republic abandoned the socialized medical system written into the original draft of the Constitution, and since the private enterprise has kept the blood suckers at bay. Every generation or so, a leech-themed episode is included in some entertainment (The African Queen, Stand By Me) in an attempt to remind us of the danger of socialized medicine.

Plus: Under Hillarycare, there's no way this patient would have so many leeches available to him. There'd be strict leech rationing in effect.

The proposition: China's sins against consumer safety have so enraged God himself that He's planning an unprecedented recall of an entire nation of His creations.

But on second thought... Isn't that a little more interventionist than God's usual style? I mean, He seemed kind of satisfied to let Hitler and Stalin do their things, so it seems unlikely that lead-tainted Barbie dolls are going to call forth His divine wrath. Plus, since Chinese people presumably are buying the same shoddily made Chinese products, surely this is a problem that is self-correcting on a divine timescale.

Plus: Perhaps God might consider recalling the moon. It's looking kind of lumpy.

The proposition: Just as during the French Revolution, Liberté will lead the people to victory! Over Iran! And its nuclear ambitions!

But on second thought... Wait, are "the people" here supposed to consist of ... Nicolas Sarkozy with a pair of scissors? And Vladimir Putin doing that silly Russian kicking dance thing? And Uncle Sam, because ... we don't like to draw George Bush, like he's hard to caricature of something?

Plus: If you're going to reproduce one of the most famous political paintings of the last 300 years, don't censor it, dude.

The proposition: It's football time again, everyone! And as we're settling down for another four months of thrilling NFL action, let's all remember what the biggest play of the season is: Getting bin Laden. No, really!

But on second thought... Most of you have no reason to know this, but as a native of Buffalo, New York, where hope goes to die, I can tell you with some degree of certainty that the fellow in this cartoon is wearing a Buffalo Bills uniform. The Bills, of course, are all we poor Buffalonians have to live for, and they alternate between spreading despair over the city all year long and bringing flashes of hope into our lives only to cruelly snuff them out in improbable ways. Thus, you can pretty much give up on any idea that bin Laden's going to be caught this season.

The proposition: Drought conditions have had the most painful impact on America's most vulnerable community: filthy stoner burnouts who somehow have attractive, professional-looking wives and large-screen television sets.

But on second thought... Can we really trust a cartoon that features a doped-up hippie blatantly getting high from a lovingly drawn bong, but apparently doesn't have the nerve to actually use the word "bong"?

Plus: Don't do drugs, America! They'll turn your babies into horrifying bug-eyed aliens!

The proposition: Having throughly blackened the eyes and broken the knuckles of America's Social Security system, Hillary Clinton now plans to do the same damage to our health care infrastructure!

But on second thought... Wait a minute, Hillary Clinton destroyed Social Security? For real? God damn, good luck getting all those old people to vote for you know, Hil!

Plus: Honest, I can't believe I didn't hear about that. If only there were an entire cottage industry dedicated to telling the world about bad things Hillary Clinton does, we'd know more about her dastardly plans.