Cartoon Violence Down The Memory Hole 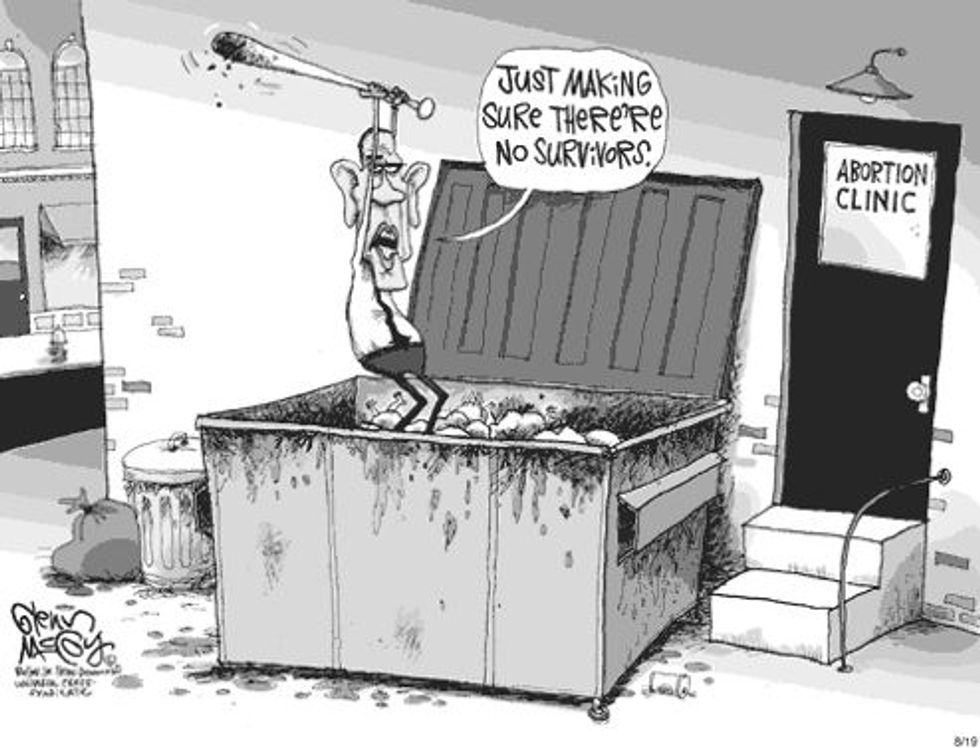 Hello children! Let me tell you a story of a magical time, February of 2006, when a young man, if by young you mean "31-year-old," wrote to his favorite blog, Wonkette, asking to be an unpaid intern, at 31. Unpaid internships were not a Political Issue then, so why not, right? Anyway, Wonkette editor and actual young person Alex Pareene already knew that this 31-year-old had his own blog, about comic strips, and suggested that instead he write a "regular feature about editorial cartoons, which are, obviously, in the news of late" (because of this whole business). Despite Pareene's caveat that "I'm not sure if this is actually a good idea or just something you come up with while reading Slate drunk," that 31-year-old took up the task, and that 31-year-old is now 39-year-old me, and I just went back to look at my old posts and all the links to cartoons are GONE, ALL GONE, teaching all of us a valuable lesson about the ephemeral nature of the Internet.

Back when I started Cartoon Violence, Pareene and I (YES EVERYTHING IN THIS COLUMN WILL BE BLAMED ON PAREENE) had to figure out how we were going to handle the delicate business of putting up images of political cartoons for me to make fun of despite the fact that, strictly speaking, we didn't have the "rights" to do so because we didn't "pay" anyone for them. I had been putting up images of Mary Worth or whatever on my blog for years and nobody cared, because newspaper comic strip artists have an easy-going attitude and also I wasn't a deep-pocketed corporation. But maybe political cartoonists would be more uptight (this later turned out to be the case) and/or then-Wonkette overlord Nick Denton would be a more likely lawsuit target? Anyway, we settled on a system where I would put a 200-pixel-wide thumbnail on Wonkette, which would link back to the full-sized original on Slate's Cartoon Box, which was a nightmare chamber where just about every political cartoon in America was published online. I would link back to the raw image files themselves, not the URL for the ad-bearing page on Slate's site, because Slate had some insane system where the URLs wouldn't stay fixed.

Anyway, I did this political cartoon feature pretty much weekly for four years, spending hours on Thursday night and Friday morning writing bizarre fever-dream hallucinations very loosely based on caricatures of Bush and Obama or whoever, but then I stopped right after the 2010 midterms, because I got a real job (which I later quit), but also because I kind of hated it. Like, I never loved the political cartoons and the mocking thereof like I loved Mary Worth! They just made me angry as time went on. I came back and did actual blogging for Yr Wonkette now and again (getting to do this was definitely a life high point) but I could never bring myself to go back to the political cartoons, because of the mental anguish. Still, I was proud to have done them for so long, and reassured by the eternal place on the Internet that never dies.

OH WHOOPS IT LOOKS LIKE SLATE TOOK ALL THOSE HUNDREDS OF IMAGES I LINKED TO OVER THE YEARS DOWN, thus causing me to make so many frowny-face emoticons, only on my actual face.

So, in the end, this is a story about how the Internet is a terribly ephemeral medium, despite its illusion of permanence, and even though you may think you are building a solid foundation of prose, you really build on sand unless you have the files on servers you control. So I stumble on blindly, so many of the cartoons I spent hours mocking gone forever from my mind and the mind of everyone else, lost in time, like tears in rain. The work of Pulitzer Prize-winning cartoonists like Herblock is still enraging people 13 years after his death, but my own humble criticism is now entirely cut adrift from its moorings.

But I will share two of my favorite panels with you, just to show you how egregious a political cartoon had to be to stick with me enough that I can Google it out later. The first is from Glenn McCoy, and was published during the 2008 campaign, when it came out that Barack Obama was pro-choice or something:

Yep, that's Barack Obama, beating fetuses to a pulp in a dumpster behind an abortion clinic, for reasons I don't think I have to explain! I've always had an affection for McCoy's weeble-wobble characters with their spindly legs, but this cartoon is nevertheless pretty alarming.

Then there's this one, which has its own special story that I only half understand. We never really heard much from the syndicated political cartoonists, but Jeff Danziger used to send us links to his stuff without much by way of explanation, presumably because he wanted us to talk about them, an implied request that I generally obliged. Then, only days before Obama's inauguration, he sent us the following image file, again without any text. It was never, as near as I could tell, published anywhere else, and for good reason: because it's vile and distasteful and uncharitable. Naturally we were proud to run it.

So if I achieved nothing else in my four-plus years of making fun of political cartoons, I have at least supplied a venue where a drawing of a naked Dick Cheney about to flush a semen-filled condom with George W. Bush's face on it down the toilet could find an audience. And maybe -- just maybe -- that was enough.