Cartoon Violence Gets Back In The Muck 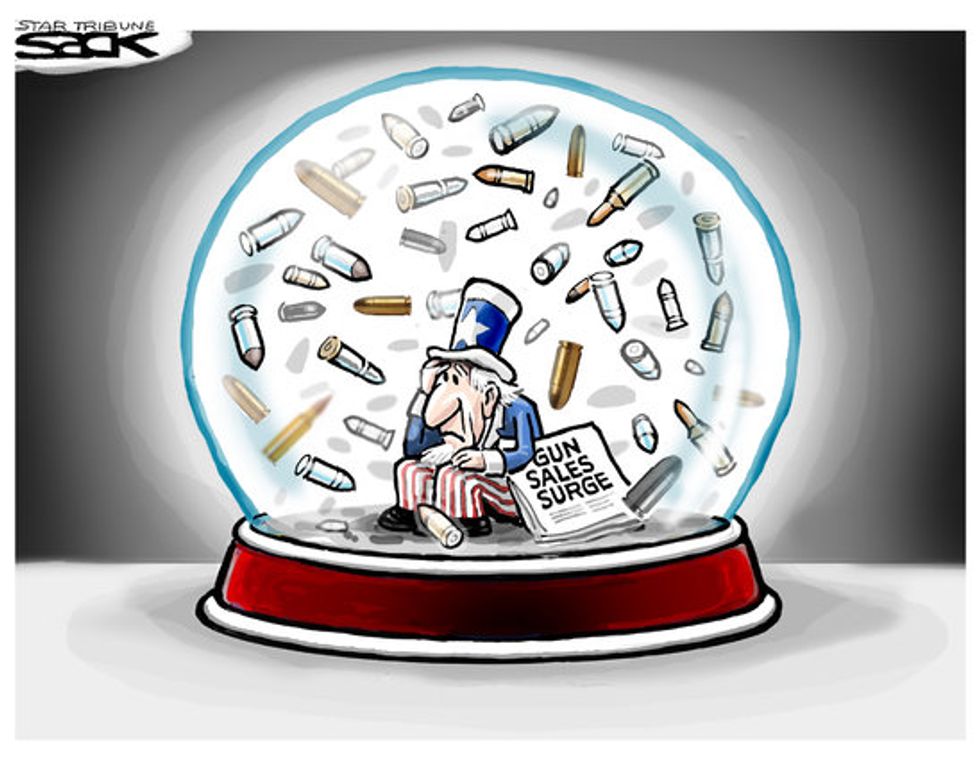 There are some Americans who believe that Cartoon Violence doesn't solve anything. “Stay out!” they say. “Let the cartoonists fight it out amongst themselves. It's a quagmire.” If, however, after all of those dead links and all of those wasted art supplies, there is still no end in sight, then I say the time has come for the American people to turn to new leadership.

Effective immediately — and for the entire month of January — Cartoon Violence will be strategically recommitting manpower toward the neutralization of only the highest value targets: decorated, senior-level cartoonists, Pulitzer Prize-winners, and other influential members of their command structure.

Yr. Wonkette's pledge is simple: We shall pay any price, bemoan any bad metaphor. Beginning with 2013 winner Steve Sack and culminating with 2010 winner Mark Fiore, we will gain back the ground lost since your Comics Curmudgeon withdrew from sustained hostilities four years ago. We cannot erase the mistakes of the past, the ink spilled, but we can and must draw over, so it looks like something else, way better, that we can pretend we drew correctly the first time.

We cannot say with certainty when the Cartoon Violence will end, but the fight must continue for a just and honorable peace.

Also, Josh Fruhlinger said it was cool with him if we steal this gig.

I know that some of you Wonkeroos are the kind of monsters who enjoy it when every otherwise decent character on Parks and Recreation busts on old Jerry/Larry/Garry Gergich. But to the rest of you, the humanitarians now thinking that Steve Sack seems like a nice old man who isn't harming anyone with his editorial drawings, I'd like to direct you toward this Saddam Hussein cartoon from 2002, “Snow-Job Globe.” Saddam really pulled the wool over our eyes back then, didn't he? Claiming not to have the weapons of mass destruction he actually didn't have — just like someone who secretly DID have weapons of mass destruction would actually claim also! And don't get me started on that Mr. Magoo, Hans Blix! That, in brief, is the problem with Steve Sack: Like an antique weathervane, Sack's cartooning is quaint, inoffensive, and deeply American — and more-or-less an adequate indicator of which way the wind is blowing. Did you know he draws his cartoons on an iPad now!? The one you and your sister got him for Christmas! He just loves it!

If you're still feeling merciful, then please go look at your online bank statement (go on) and know, in your heart, that Steve Sack won a $10,000 cash prize for the following Pulitzer-winning contributions to our political discourse:

JPMorgan is GAMBLING with your money. Roulette specifically, yuk-yuk, yuk-yuk!

The Republicans sure are working themselves into a lather about Obamacare. People also lather shampoooooooo!

CIA director David Petraeus is in the news this week, after evidence emerged of the general's illicit sexual affair with his biographer, Paula Broadwell. You might say he's shifted his mandate away from top secret material to Victoria's Secret material. Hot cha cha! Criminal négligée ...

What else can we say? As Scott Gillespie, the editorial page editor at the Minneapolis Star Tribune where Sack works, put it in his cover letter to the 2013 Pulitzer committee, “Steve's work is consistently excellent and he is beloved readers [sic].” How can you argue with that?

We are, incidentally, ignoring for the moment all of the other editorial cartoons that Steve Sack produced during his Pulitzer Prize-winning year, including: yet another weaponized snow globe, a two-decade old Energizer Bunny reference, and a joke about Michele Bachmann that manages to be less coherent than Michele Bachmann herself. One of the inspiring things about Steve Sack's victory is that it suggests many of our own Grammies and Pee-Paws have within them the potential to be Pulitzer Prize winning cartoonists, if only we'd send in twenty or so pages from that legal pad near the landline where they doodle.